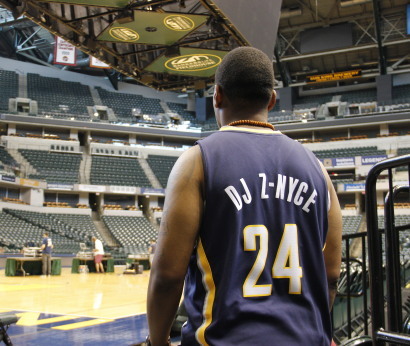 A native of Louisville, Kentucky, DJ Z-Nyce has entered the Hip Hop scene in his hometown and for over six years has made a tremendous impact by becoming one of the Southeast and Midwest regions most recognizable and influential deejays. He possesses the professionalism, talent, and knowledge to span multiple music genres which is needed to make any event a success. DJ Z-Nyce cut his teeth in the deejay business doing “house parties” and club gigs and has grown into a top choice of entertainment for upscale and corporate events. He has been able to use social networking to assist in building and marketing his brand throughout the Southeast and Midwest Regions. He can be found on Facebook (djznce), along with Twitter and Instagram (@djznyce). He has deejayed and hosted an array of events and is a resident at several clubs in the Louisville area including 60West,BBC,4th Street Live, Forecastle and events sponsored by Big Borther Big Sister, The Arrow Fund, H&M,Victoria Secret,Macy's,MAC and more. Adding to his list of achievements, Z-Nyce launched his own APP where fans and potential patrons can browse his current events, keep up with his social networking, access mixtapes, and learn more about the DJ.

As stated earlier, DJ Z-Nyce is well traveled throughout the Region and has provided the musical entertainment at successful events at clubs in North Carolina, Nashville,Las Vegas TN, Ohio, Chicago, IL, Atlanta, GA, and Indiana. He is a regular at in state colleges Kentucky State University and the University of Kentucky as well out of state at CIAA. He is actively involved with the local community and has been a part of the local morning show, WHAS’s “Great Day Live Show”. He is also intertwined in the Louisville concert scene and has graced the stage with the likes of national Hip Hop recording artists Yo Gotti, Meek Mill, Mystikal, Bun-B, Gucci Mane, E-40, Scarface, and Wale. He recently became the Official DJ of the NBA’s Indiana Pacers and will be heard providing the musical entertainment and select NBA contests starting this coming season. DJ Z-Nyce’s turntable skills, extensive musical knowledge, and experience make him one of the most sought after deejays in the Midwest and Southeast regions, and soon to be the country. He has the ability to make your next event a special to remember.