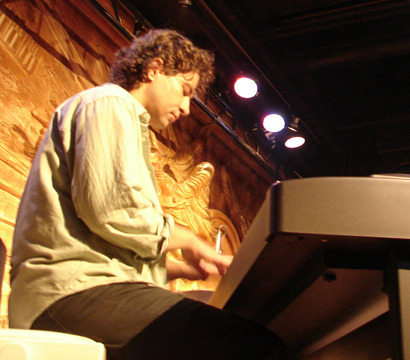 Many people focus on the internet's tendency to isolate, keeping us secure in our bubbles. Marcin Malinowski's e-Connection reverses that trend, using the internet to bring people together, to share in a groove.

Marcin Mallinowski's E-CONNECTION brings together the worlds of electronica and jazz in fine fashion. E-Connection began in October of 2013, when Mallinowski met Dutch percussionist Jeron de Rijk, beginning a series of tele-collaborations. E-connections quickly expanded to include Finnish guitarist Kai Kortella and Italian bassist Enrico Galetta, with guest performances from Mariusz Kozicki on trumpet and Deniz Atalay on guitar, to become a virtual super group of European jazz talent.

For the recording of Yakamoza, Mallinowski wrote all the parts in his home studio in Poland, then sent the scores to the participants. Two of the songs, "Asena", and "Mary In Space", are from one of Malinowski's previous projects, brought to fresh and sparking life for the sessions, while "Delia's Cake," inspired by baking a carrot cake with Malinowski's daughter Delia, created specially for the occasion.

What we're left with is a guided tour through the dreams and desires of the entire Earth. It exists no place and everywhere, simultaneously. It exists in the imagination of the musicians, and in the hearts of the listeners. Marcin Malinowski's e-Connection is reclaiming the collaborative, inclusive power of the internet. Malinowski's music brings people together. It engages. His music brings the virtual into reality.

E-Connection won't remain virtual for long, however. In Spring of 2014, all of the musicians convened in the flesh for the first time, at Mallinowski's home in Poland. They've got concerts planned all over Europe, and will be participating in several festivals. They've got collaborations lined up with musicians from Armenia, Nigeria, Brazil, Cuba and The United States, and will be releasing a full-length album in a few months.

Marcin Mallinowski's music exists in a place before cynicism. He is not afraid to be "progressive", and keeps the inclusive ideals of fusion jazz burning, bright and alive. Mallinowski reminds us of the e-Connection that connects us all, that brings us together, that shows the similarities while in the difference.

Update Required To play the media you will need to either update your browser to a recent version or update your Flash plugin.
Download Download
Contact Information
Press: J. impson/Bitstar Productions: j.forestpunk@gmail.com
Information Request