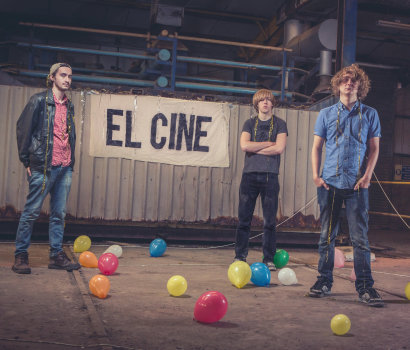 The trio consists of lead singer/bassist Mike, guitarist Ged and drummer Gelo who together will bring pandemonium and sick riffs to any venue. Hailing from almost everywhere, the band formed and gig regularly in Guildford, a town where playing punk rock resembles screaming at a brick wall.

El Ciné are taking a sledgehammer to that brick wall with their latest release 'Double A'. Recorded in Brighton and mastered by Danny Farrant (The Buzzcocks) it features two fresh singles and a music video already appearing on Blank TV. This record will take your concept of punk, strip it of it's stupid clothes and throw it back in your face.

This is Grit Pop.

Contact Information
For more information on the band's recent release or to book El Cine for a show contact the following email address.