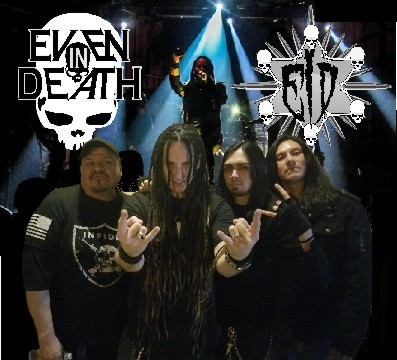 Even In Death is a Texas band based out of San Antonio, Texas. Established in 2013, EID storms the front line with bone crushing riffs,and powerful grooves with subject matter that reaches out to the listener taking them through a valley of fury and aggression.

Having conquered the local scene and established them selves a force to be reckoned with EID has shared the stage with the likes of Sevendust,Power Man 5000, Blue Oyster Cult, Soulfly, Murder FM, Wednesday 13, HED p.e., Mushroomhead, Holy Grail, Metal Church, Riot V, Death Division, Scare Don't Fear, Unsaid Fate, Super Bob, Crobot, Gabriel and the Apocalypse and a various number of national original and tribute bands as well as playing shows across Texas!

Recently Even In Death won the grand prize of "People's Choice Award" at the Battle of the Bands at CarFest 2017. It was judged by a panel of industry leaders and record labels as well as the audiance itself resulting in Even In Death winning $2,500 in cash and prizes!

Even In Death is currently in the studio completing a full length album with it's release due this Spring this year which will include a song featuring G Tee Shotta of Wu-Tang Clan. Even In Death just released the video for  1st single "Fire All Your Guns" produced by Video 77 and has very well received! The future of EID is bright and on the way for success with tons of fans and a high energy stage show that brings more people over to Even In Death!!!

We are almost finished with the new full length album so get ready! A bunch of new events and merch will be coming around the corner! Plus new videos that YOU could be starring in with us! Not to mention a brand new awesome show! Stay tuned!!!!

Even In Death will be playing the 5th Annual Teaxs Throwdown Magafest 2017! Along side us a lot of other awesome bands like Final Exit, Mojo SavageHigh Voltage (AC/DC tribute), Blackout U.S.A. (Scorpions tribute), Heather Leather, Awkward Factor 8, Fear From the Grave and more!!!!
Advance tickets only $10 through any member of Even In Death or message us on Facebook.com/eidtx

EVEN IN DEATH needs your help!!
Let's make San Antonio The Heavy Metal Capital of the World again!! We have a chance to support San Antonio at Corona's Heaven and Hell 2018 in Mexico!!
HELP OUR DRAMS COME TRUE by purchasing a ticket from us for $13 for our showcase at Come And Take It Live in Austin, Tx on Sunday April 8th. THANK YOU FOR YOUR SUPPORT!

Even In Death is playing Pigfest 2018!

Also on the bill:

DEAdpOOL, Pigweed, Under No One and more TBA!

Even In Death returns to San Antonio, Texas!!!

Even In Death with Rivethead, Sojen and SeVen at Bond's Rock Bar

Even In Death is opening upfor Heaven Below!!

Even In Death Battle For Wacken 2019

The winner of the National Final will then move on to perform at the 30th edition of Wacken Open Air in Germany, and compete against the winners of 29 other countries in a final Global Battle at the festival. All bands will be judged during battle rounds by respected local music industry representatives.

Get paper tickets from the bands...

** This event is ALL AGES, however, anyone under the age of 21 will be charged an additional 'minor surcharge' at the door. **

Come And Take It Live

HOW IT WORKS:
Texas Regional Battles were held throughout the month of March 2019 in Austin, Corpus Christi, Dallas, Houston and San Antonio. One-two bands were selected from each of the Regional Battles to move on to the Texas State Final in Austin, TX on April 20, 2019. One band will now be selected at the State Final to perform at the National Final in Los Angeles, CA on May 25th, 2019.

The winner of the National Final will then perform at the 30th edition of Wacken Open Air in Germany, and compete against the winners of 29 other countries in a final Global Battle at the festival. All bands will be judged during battle rounds by respected local music industry representatives.

Even In Death Live at Boozerz in Corpus Christi w/ Mordred Silence!
More bands to be announced!

Even In death returns with our friends to honor our troops

Please come and celebrate our troops, veterans and American way of life in San Antonio!

Please click on our Press release below for more info.

Veterans and Military please sign up for your free tickets here

Gandhi's Gun: With high energy and an aggressive edge, Gandhi’s Gun combines the best elements of rock from days past with the most modern textures of metal. Fronted by two perfectly matched male and female voices, the San Antonio based group steps ahead of their time while remaining comfortably familiar.

Reason Define: Reason|Define, an all female hard rock/metal band based in Charlotte, NC. If you are a fan of catchy rock-style riffs, powerful melodic vocals, and breakdowns then you have come to the right place!

SISTER KILL CYCLE
Sister Kill Cycle has stirred interest all over the US as well as abroad since slamming into the music scene with their intense stage presence and performances. Utilizing a self made light show and professional production, the group brings life to any stage they perform on. Self described as shock rock and roll, Sister Kill Cycle have perfected the art of genre bending and writing music for fans of multi cultures and generations. Fronted by Raven Chain, the band have been growing and evolving since 2001!

In 2010 the band released their first full length album entitled “Redemption through Rebellion” on their own label Negative Image Music Group. Again, mastered by Sara Lee Lucas at his Masterlab facility. The band toured the US constantly supporting this record and the momentum has not stopped. Currently, the band has been working on a new record entitled “Public Enemy Number One” and plan to release two music videos in addition to the record.

After relocating to Tampa, Florida, 2004 saw the release of the band’s debut EP entitled “Massacre the Guilty”. The band self recorded the EP but had the help of Chris Telkes(NOCTURNE) for mixing and was mastered by long time friend Sara Lee Lucas(Ex-Marilyn Manson) at his masterlab studios in Orlando. The release captured the attention of both fans and critics alike, landing the band on top spots on internet charts including the Florida charts for most plays and also the highest rating on Myspace.com for May 2004! Currently the band has a fanbase of over 10,000 friends on Facebook.com and are constantly promoting themselves through touring and social media.

Sister Kill Cycle currently have endorsment deals with BC RICH guitars, DDRUM, KUSTOM AMPLIFICATION, FLOYD ROSE, EMG and ROLAND. SISTER KILL CYCLE have had the pleasure of performing with many national acts as well as a spot on several national tours.

PigWeed
An alternative Nu-metal style band from San Antonio/Austin, Texas,
Pigweed was formed in 2009 by Mauricio Ortega, and Rudy “Fresh” Rodriguez, reinventing the style with an unsurpassed sound that some claim is “Nu-metal with a modern twist”.

After a few years, David Magallanez joined as our percussionist, and a year and a half later, Chris Fletcher joined the band as our new bassist. In 2016 Thomas Villarreal joined the band on Drums and a few months later Danny Young came in on guitar and added that low end crunch to our sound. In 2018, Corey Epps joined as a backup guitarist.

Pigweed has remained one of the hardest hitting bands in South Texas. With a versatile style, that keeps you wanting and begging for more.

Now with Curtain Call Records, recording artist Pigweed have played on numerous national shows and festivals in support of bands like Ill Nino, Nonpoint, A Killer's Confession, Soulfly, Mushroomhead, Fire From the Gods, and many more..