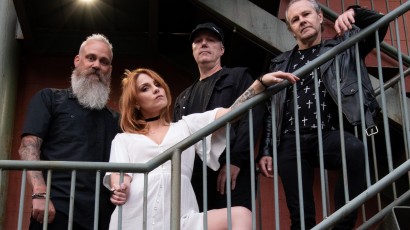 “I immediately felt like I was back in the Comalies phase of Lacuna Coil” -- The Art 2 Rock, album review

Evereal is back, with a new lineup, new four-song EP and two new music videos.
Based in Vancouver, Canada, Evereal debuted with their first full-length album in 2017, and signed a distribution deal with 7Hard Records in Germany.

Following the release of the band's first album, the band went through a lineup change, with a new drummer and new lead vocalist and lyricist.

Alicja Moniatowicz, the band's new lead singer and lyricist, was the perfect fit for Evereal. Both Moniatowicz and band leader Stephen Roberts are fans of Evanescence, which comes though in their writing. Heavy metal guitar riffs and drums underlying a sonic quiltwork of piano and strings.

Earlier in 2019, the band began writing and recording new material. The result is a new four-song EP, entitled I Bleed, and two new music videos. The band has once again signed a distribution deal with 7Hard Records.

Evereal started as a studio project born of the writing process. Evereal Was created by Guitarist Stephen Roberts in 2011. The concept was to recruit musicians to write and record music with emphasis on groove and melodic content utilizing symphonic qualities, The group now finds themselves working towards the end goal of creating music of complexity, while retaining groove within the layers of symphonic sound. The end result is Evereal.

The band launched a successful kickstarter campaign that saw the band raise $10,000 towards completion of their debut album. This was followed by a worldwide distribution and promotion deal with 7Hard records Germany (part of the 7US media group). The CD is scheduled for release in January 2017.

Inspiring a love for Metal!

This week, I am introducing some very talented groups that I have had the pleasure of knowing through my circle of social media! I love sharing new music with you, so let's get started!

Hailing from Canada, this is Symphonic Metal band "Evereal"! A blend of "Groove and Melody" symphonic and progressive metal, with songs reminiscent of Evanescence and Nightwish! Their music is sure to pump you up and inspire with the amazing vocals of artist and singer Stephanie Neufeld! They have just finished pre-production for their debut album, and need your help. They have launched a Kickstarter campaign full of great perks like band shirts, guitar items, and autographed albums. You can check out their project here: The Metal Female Voices Community is happy to support your project!