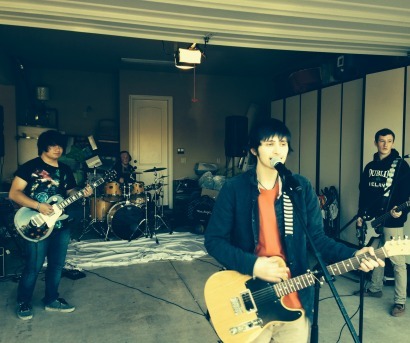 Failed Diplomacy is an alternative rock band from Sacramento, California. The band formed through Skips Music's "Stairway To Stardom" program over summer, 2013. At the final concert, they placed third out of fourteen bands.

Failed Diplomacy's musical style explores the many sub-genres of rock. "Broken Paths" is a rock-ballad about forgiveness. "Legacy" is the band’s heaviest song about not letting someone intervene with having free will. "Redemption" is a pure-rock song about someone struggling to do the right thing. Failed Diplomacy's music is influenced by Three Days Grace's heaviness, Green Day's punk, Coldplay's soft-rock, and many more styles.

Jordan Telgenhoff is a rock musician who loves to perform. His voice has been compared to Billie Joe Armstrong (Green Day) and his guitar style is similar to that of Dave Grohl (Foo Fighters). His meaningful lyrics and melodies work together to make a lasting impact on any listener.

Jordan Telgenhoff was born and raised in Northern California. His desire to pursue a music career began in middle school when he learned to play the guitar. Jordan's interest in music theory inspired the start of his songwriting. In high school, he began singing and eventually formed a band. Today he performs as often as possible at venues such as Toby Keith's I Love This Bar and Grill, MusiCafe, and The Beer Garden.

Mark Morozumi is a diverse guitarist from the Bay Area, who recently joined Failed Diplomacy. He has been in many other musical groups, ranging from metal, to folk, to blues, and jazz. His guitar style is mainly influenced by blues, but started off playing punk music in middle school.

Ethan O’Brien is a rock bassist from Sacramento, California. He's influenced by punk rock bassists, such as Mark Hoppus (Blink-182) and Mike Dirnt (Green Day). Ethan is capable of writing excellent bass riffs in all genres of rock; his expertise lies in his ability to create fast-paced, hard-driven, pure melodies.

Henry Adkisson is a rock drummer from Sacramento, California. His drumming style is similar to that of Tre Cool (Green Day) and Neil Sanderson (Three Days Grace). He favors simple, hard-hitting beats, but is fully capable of getting technical when the need arises. Henry's performing experience as a jazz drummer and marimbist has taken him all over northern California, and he has performed everywhere from Portuguese Halls to Pier 39 in San Francisco to the Lodi Grape Bowl.

The Boardwalk in Orangevale CA http://www.boardwalkrocks.com/

Come see Failed Diplomacy and other bands perform at the Boardwalk!

$10 per ticket...Contact us if you want to purchase!

I will have the link for online purchasing soon.

Thanks for the support!

Failed Diplomacy Live at The Boardwalk in Orangevale, CA

Message us for details!

Failed Diplomacy Live at The Boardwalk in Orangevale, CA

Check out Failed Diplomacy perform acoustcally at The Boardwalk!