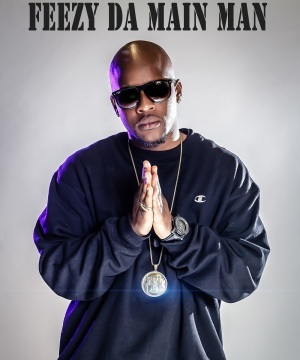 Feezy was born in Dakar, Senegal only to immigrate to Montreal, Canada at the toddler age of three. He grew up in a musical environment and developed an overwhelming passion for hip hop. Over the years, he decided to follow his father’s footsteps and compose his own music.

He began to write a lot of songs and eventually perform in talent shows and musical events around the city. When he skillfully blesses the microphone, Feezy Da Main Man as he is affectionately known as in Montreal, makes sure his fans are thoroughly satisfied and entertained. With time and experience, Feezy has expertly mastered how to execute the many dimensions of the rap/hip-hop world.

"When I first started rapping I was called Lil' Fo, I wrote my first rhymes at a young age so that pushed me to improve my lyrical and song crafting abilities" explains the reflective rapper.

Raised in Montreal, where Hip Hop has yet to find an established and thriving setting in the music industry, this talented lyricist has persevered in giving his city a reinvigorating voice. Along with his skill, talent and hard work; the Montreal rapper possesses a charming personality that captures the genuine interest of music lovers with his sense of uniqueness mixed with his slick flows and jaw-dropping metaphors.

During the summer of 2005, Feezy made his introduction city-wide in a joint project mixtape creating a huge buzz and strong interest in Montreal's burgeoning hip-hop scene.

The "Do it One Tyme Vol. 1" mixtape was given a resounding stamp of approval and clearly outlined that the city wanted to hear more of this young talent.

Feezy followed that with his first solo mixtapes "Ill Recognize Ill Vol.1-2-3" which scorched the streets of Montreal like no prior underground release. This work of genius was filled with hot new material and a fresh sound. It also gave his loyal fan base the opportunity to hear an updated and improved side of the unbelievable track 'Killa'.

Soon following, Feezy's solo projects consisted of videos to his hit songs which were being played repeatedly by his fans crowning him the title "Montreal's Main Man". With over 400,000 video views and 12 mixtapes under his belt, promoters were soon seeking to have this young talent performing in their shows. He opened for several main stream artists such as, Ace Hood, Bone Thugs, Booba, Lafouine, Elephant Man, Beenie Man and others.

He plans on proving to the world that you can achieve what you desire in life no matter where you from or who you are. There is a whole lot more excitement to come in the near future so prepare to hear a new style of hip hop on the musical charts!