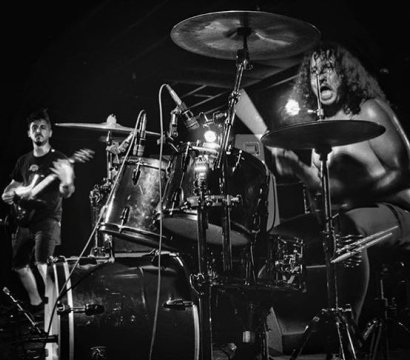 Stripping away the comforts of a traditional band infrastructure, Fermentor relies solely on communicating through only two elements, drums and guitar. The two instruments acting more like contrapuntal voices, rather than just rhythm and melody.

Their musical chemistry was discovered in the summer of 2008 when the two cousins took advantage of an opening at Wollach’s recording studio. Having never jammed before and with only four weeks to write and record, they wrote four songs that they released as their first EP entitled Matanzaa.

After a brief period of living on opposite coasts, Fermentor regrouped and began to push their writing to a new level. With total control of their unique synchronicity, they were able to release two EPs, Fermentor and Rate of Cognition.

Their explosive live performances have garnered them the reputation of an unrelenting and high-energy experience that one would not expect from a duo. This has allowed them to share the stage with experimental powerhouses such as Behold!...The Arctopus, Atomic Ape, and Captured By Robots.

Fermentor is extremely proud to announce that in 2020, they will release their first fulllength album Continuance.

Wollach, known for his superb audio production work with bands like Eukaryst and Beekeeper, has again taken the helm to mix the new album. He has also designed and created the artwork and graphics for Continuance. Tracked by recording engineer Dale Holland at K St Recordings, and mastered by Brad Boatright at Audiosiege, this album is expertly produced with a sonic quality that goes far beyond any of Fermentor’s previous albums.

This highly creative progressive album aims to play with the listeners ear by subverting expectations of tonality and song structure. Bursting with intricate timings, propulsive arrangements, and unconventional riffing, Fermentor is ready to share this new album which they believe will display a new realm of musical possibility.