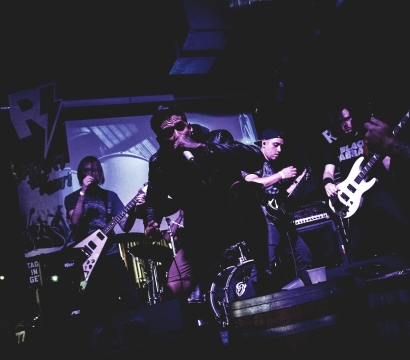 Formed in the SF Bay Area during the summer of 2013; F&F embody a standout style of metal that is influenced by thrash, punk, and hardcore. While remaining independent, to date, F&F have self-released 3 EPs, 1 Album, 5 music videos, 1 international compilation feature, and 3 singles. They toured the West coast of America in 2015 and have played numerous local shows in the bay area. The young band has been compared to the likes of many iconic metal acts.

In 2018, Fire & Flesh relocated to San Diego CA, to fuel their creative process and chase opportunity. Upon their arrival, the band immediately began inserting themselves in the local scene by teaming up with local promoter Peter,[Riot Scene], and playing shows at venues all around the greater San Diego area.

Despite moving away from their native Bay Area origins, F&F spent much of 2018/2019 flying back so that they could continue to work on recording a new record with their producer Aaron Hellam, of Hellam Sound Studio/Castle Ultimate Recording.

Fire & Flesh are currently now sitting on a finished unreleased record. For record labels that may be interested, please inquire via email for a private streaming link to the new material.