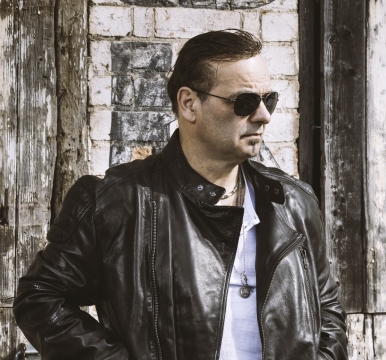 Melbourne, Australia-based Frank Falvo outturns a brand of acoustic folk pop that is both animated and radio-friendly. His heart-warming songs are imbued with technique and emotion, conjuring up the latter work of Bruce Springsteen, Elvis Costello and Dan Fagen of Steely Dan.

In 2006, a series of personal tragedies led to a spiritual shakeup and Frank swapped his job as a bank manager to pursue music professionally. His innate talents landed him a spot as a lead Guest Entertainer aboard the Crown Princess Liner where he performed in front of packed crowds, cutting his teeth on audiences across the Mediterranean, Ocho Rios, UK, and Cayman Islands. Once he returned to Melbourne, Falvo quickly became a fixture at corporate functions and events, building up enough original material to record his debut.

In 2009 Falvo released a handful of lush slow-to-mid tempo ballads under a four song EP entitled Movement in White. The EP spawned a popular video for the title-track which went on to be featured on the ABC program Rage in 2010, and once more in the following year. Frank’s second release, 2010’s The Winds on Fire, featured 10 emotionally charged originals which found a home at several local radio stations, culminating in a live local interview/performance on channel 31 in Australia.

As his music career began to solidify, Falvo made the commitment to cultivate further relationships with experienced players and producers and began tracking several singles with Grammy Award Winning Scott Matthews (Chris Isaac and The Rolling Stones) and Stuart Epps (Elton John and Oasis) at the helm. These singles were eventually compiled to make up his two recent albums, Heart So True (2018), and Thieves (2019) both of these albums as representing a large-scale sunshine pop opus, couched in harmonies, brass, violins and Falvo’s effortless pop rock sensibilities.

For Licencing and Sync: jetpilot333@hotmail.com

"I would describe him as a multiple layered onion that needs to be peeled back to unearth what's inside". Steve Muscat Radio presenter of muso Muso UK.

Played on the Janauary 2020 edition of "The Listening Post New Music Radio Show" at #11 below.

FV Music blog. "Falvo's voice is stunning". "Steal this heart away is an intoxicating listen".

FV Music blog"."Falvo's voice is stunning". "‘Steal This Heart Away’ is an intoxicating listen. Filled with high energy and catchy grooves, it is a song that stays with the listener long after the music has finished" "Thieves". Link below

Talk about pop music. FRESH. "This is a lie" Frank Falvo

“Talk about pop music" Blog review for Heart so True EP. "Falvo outturns a brand of acoustic folk pop that is both animated and radio friendly" . Read the review here, videos and catalogue. Link below.”

““Wail Music Magazine". "With upbeat tempos, and energetic guitar accompaniment, Falvo shows off his dynamic vocal range and unique lyric writing abilities in each track of this new album. "Heart So True".

Sidestage magazine. Review of "Heart so True" EP and "This is a Lie"

The song "This is a lie" is featured from my new EP for release 6 July 2018. Commentary as follows: "Heart So True is an amazing album rife with lyrically pleasurable tunes. Frank Falvo, the genius behind this music that sounds like it comes straight from the late 70’s and early 80’s, has gorgeous vocals and a steady voice. These songs border on sadness and joy". Thanks for the kind words. You can read the review at the link below.”

Neufutur magazine review of "This is a lie"

“Neufutur magazine review of "This is a lie" . Featured song - new EP for release 6 July 2018 "Heart so true" Commentary: ”The rich instrumentation creates a tapestry upon which Falvo's vocals shine brilliantly". Thanks for the kind words. You can read the song review at the link below.” http://neufutur.com/2018/06/frank-falvo-this-is-a-lie/

Review and exclusive of "This is a lie" and "Heart so true" my new EP for release 6 July 2018  "Falvo has conjured up some retro flavors and personalized them with his emotional-tinged lyrics and equally dynamic vocals." NOTE:- Site is deactivated or has been removed. My web site for full copies of review. (Link below).

Artist View Blog - Extended Plays. Full album "Heart so True" review. "The Australian singer-songwriter pull lyrics and vocals from deep within" .  You can read the song review here, at the link below. NOTE:- Site is deactivated or has been removed. My web site for full copies of review. (Link below).

Noises and Nonsense magazine. "with no shortage of fun instrumentals to compliment consistently solid tenor vocals" EP REVIEW "HEART SO TRUE". . “This is a Lie” "play to Frank’s diverse strengths and dexterity. Jazzy, fun instrumental additions like the sax make for a surprisingly diverse listening experience" . NOTE:- Site is deactivated or has been removed. My web site for full copies of review. (Link below).

First premiere today for my song "This is a lie" from the prestigious music blog UK Songwriting magazine."Today’s exclusive is from the brilliant, Frank Falvo.". Thanks for the kind words. You can read the song review here. This featured song will be on the new EP release "Heart so true" 6 July 2018.

"I love your voice and would be honored to produce your songs with you here in Nashville". Eric Zanetis Producer. Diamond Garden Music. Nashville

"This is a unique song and the melody and mood match the sorrow of losing her but not being able to get her off your mind, seeing her everywhere. Artists and audiences listen for something different and moving, and I believe ALWAYS SORRY is in that category. We simply feel that ALWAYS SORRY has the most commercial potential.". Troy Martin. Publisher/Songwriter. Diamond Garden Music. Nashvile USA.

Just finished this one in NSW December 2016.  I give you " Always sorry".  This is very much a pop/rock and indie song. It is my first protest song i have written. I hope you enjoy it. You can find it on my Player here. I intend to have this song placed on my new album. Please spread the word.

In September 2015 i decided to record here in Melbourne my latest song "The chair never turns". It was finalized in October 2015. I hope you enjoy it.

"Sounds like your doing some good stuff . "A guy like me" is a good track" . Stuart Epps (Producer UK) (Elton John, Oasis, Twisted Sister) 18 February 2015

So proud for my SECOND commendation/ or honorable mention from - The Song writing contest at "Song of the year" for "This is a lie". Sept 2013.

Four months of some solid sweat on this one. Recorded at Toyland Recording studios with Grammy and platinum awarded music producer from LA - S Mathews (Rolling stones, Santana, Beach Boys and Chris Izak). Down in Melbourne in February 2013 for the Recording Artists Masterclass. We recorded the back bone of the song here. It was finalized and remixed here in Melbourne. The song was re-mastered in July 2014 by Pete Maher (London UK) (U2, The Killers, Kate Perry). This is very much a true pop/rock song. I hope you enjoy it.