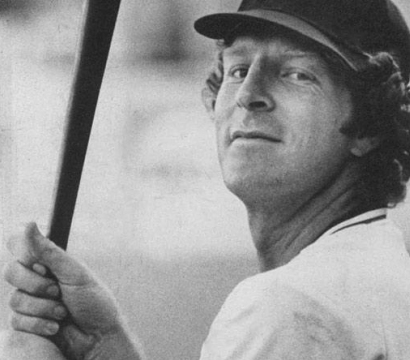 "The Battered Bastards of Baseball", premiered at the 2014 Sundance Film Festival which features the Portland Mavericks, a minor-league baseball team, in the 1970's. Mavericks owner, actor Bing Russell, (father of actor Kurt Russell, who also played for the team) is the star of the film and a leading light of the documentary is Frank Peters, who managed the team and lived by his basic idioms. “Make sure the people who hate your guts are separated from those who haven’t made up their minds."

Portland, Oregon bar owner Frank Peters led the team for two seasons after Mavericks' first manager was suspended for assaulting an umpire. On August 31, 1974, Peters undertook the most unusual strategy of having each player play each position for an inning; Portland won the game over Tri-City Ports, 8-7. He also played regularly hitting 283/.358/.425 while going 1-1 with a save and a 5.63 ERA on the mound in '74.

Frank Peters was born and raised in Corvallis, Oregon. Peters attended Oregon State University, playing on the 1962-63 Beavers basketball team that reached the Final Four of the NCAA Tournament which included NBA player Mel Counts; Terry Baker, football star who won the 1962 Heisman Trophy; and Steve Pauly, a multisport athlete who is a member of the Oregon Sports Hall of Fame.

Peters dropped out of college his junior year to sign with the Baltimore Orioles. He played 10 seasons in the minor leagues, five of them in triple-A ball. "The New Yorker" once described Peters as “a platonic ideal of a baseball player…tall and rangy with a horsey handsome face and light blue eyes under blond eyebrows.”

Peters served as player-manager of the Mavericks in 1974 and ’75. As manager, his motto was “No rules, no signs.” He proved it, however briefly, by having his 79-year-old high-school coach play third base.

‘The Battered Bastards of Baseball’ to ‘Benchwarmers’: Our Guide to Baseball Movies

The Battered Bastards of Baseball’ to ‘Benchwarmers’: Our Guide to Baseball Movies

Here are four baseball movies currently on Netflix that will hold you over until Major League Baseball returns on April 6, 2015.

The documentary follows the Mavericks and specifically their iconic owner Bing ... bodyguard" of then-manager Frank Peters

If you're a fan of Portland or a fan of baseball, "The Battered Bastards of Baseball" is almost sure to please.

Frank Peters played 10 seasons in the minors, five of them in AAA.

Sundance Review: Baseball Maven (And Kurt Russell's Dad) Bing Russell Saluted By His Grandsons In 'The Battered Bastards of Baseball'

Sundance Review: Baseball Maven (And Kurt Russell's Dad) Bing Russell Saluted By His Grandsons In 'The Battered Bastards of Baseball'

"The Battered Bastards of Baseball," a documentary by siblings Chapman and Maclain Way, manages to be many things at once: an affectionate ode to their grandfather, a distinctive snapshot of a noble experiment and a bittersweet glimpse at the possibilities of the many ways in which the game of baseball can be experienced.

A “Frank” Conversation About The Grand Cafe

A “Frank” Conversation About The Grand Cafe

The Grand Café has an interesting history, both as a bar and as a restaurant.  The Grand is now a partnership and Portland luminary, athlete, bar-owner-entrepreneur (Peters’ Inn and The Habit), independent candidate for governor and former prison inmate, Frank Peters, is officially the “chef.”

MY MORNING WITH THE ONE & ONLY....FRANK PETERS

MY MORNING WITH THE ONE & ONLY....FRANK PETERS

Frank "The Flake" Peters manager of the legendary Portland Mavericks live on Anarchy Radio with Jason Allen via houseofsound.org.

Speaking event for The Sports Alumni of the Greater West Coast.

How To Win With 24 Outlaws: A presentation about the legendary Portland Mavericks.

Private Event for the Cornell & Dartmouth Alumni with Socail Hour

Celebrating the Opening Day of Baseball with Crazy Maverick Stories!