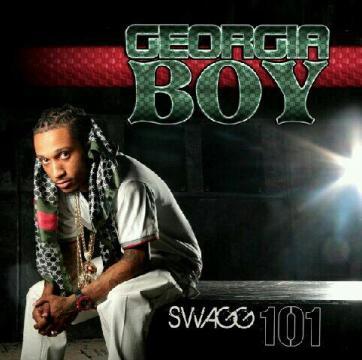 Harry Alexander Bowser V better known as his stage name Georgia Boy was raised in Hinesville Georgia in ‘85. Georgia Boy traveled around the world being that his father was in the military. During his early childhood and teenage years he traveled to Korea, Germany, Georgia, Kansas, North Carolina and South Carolina. Listening to music in these different areas gave him his diverse music style. Some of his musical influences come from artist like T.I., Ludacris, Waka Floka, Future and 2 Chainz just to name a few.

Georgia Boy had a strong passion for music deriving from his musical background which started at the age of 4, singing. At the age of 7 he taught himself how to play the drums. Throughout his childhood he sang along with his siblings and mother at his parents’ church in the family choir. These experiences helped build his sense of security and confidence performing in front of crowds.

As a young adult Georgia Boy pushed his music aside to focus on a job career. Georgia Boy started working at a Civilian Personal Operation Center and later joined the US Army and did a 15-month tour in Iraq. After he finished his term in the Army, Georgia Boy moved to South Carolina where his parents had settled and decided to support his family where he worked for T-Mobile and then Sprint.

Georgia Boy through all this could never stay away from music of course. Being back in the states and out of the military he knew that a 9-5 was not his passion and it was time to get back on the music scene. Georgia Boy started promoting his music in different clubs in South Carolina and surrounding areas. Determined to make himself known he networked landing his music on various mixtapes on a quest to make sure the streets knew who he was. You can find him featured on DJ Del Kover’s “Chuck town Stand Up” Vol 1 & 2 on Datpiff, Dj Mem C’s “Mem C for President”, and Adthegeneral’s “Eleganthoodness South Carolina Edition” mixtapes just to name a few. His grind soon paid off as he caught the attention of a manager by the name of Imond Johnson. After linking up with Imond he later became signed to Empire Entertainment and started recording his music professionally. Georgia Boy since developed his own down south style of music, which he would call “Swag music”. Georgia Boy began to create that buzz which brought by the opportunity to open up for different local artists such as Dirty Dave, Prime Time and Digga, Slim Bubba and Mista Taylor. Georgia Boy was also blessed to open up for mainstream artist Wooh Da Kid (Brick Squad), Jagged Edge, and V.I.C (Warner Bro. Records). Georgia Boy has also hosted at different venues in the South Carolina metro area such as Club Rendezvous (Supa Star Saturdays, Plan B (Supa Star Saturdays con’t), and an All White Affair Boat Ride off the Charleston Harbor just to name a few.

Working on his highly anticipated EP “Swagg 101” which includes his hit single “Shawty Go Hard”, Georgia Boy has for sure got the clubs, radio and internet fans looking for more. “Shawty Go Hard” has since July 2012 been spun on various internet radio stations such as Something Serious Sundays (on Dtfradio.com/NY), Geechee One Radio (On Blogtalkradio.com/SC), The Rad & Assas Show (on Gidradio.com/NY) and Rockin Out with N.A.B (on Blogtalkradio.com/M.O)just to name a few. "Shawty Go Hard" also made Top 10 most requested countdown (on Z93 Jamz/SC) in 2012. Georgia Boy has been featured on GlobalShyne.com as well as SomethingSerious.net.

With his music buzzing and demand for appearances growing, Georgia Boy was at his prime and ready to take his movement to the next level. Georgia Boy began to experience setbacks with the entertainment label he was signed with, which forced him to rethink his strategy due to limited production and progress on his labels behalf. In 2013 Empire Entertainment and Georgia Boy decided to go their separate ways in which Georgia Boy took some time off to rebuild his brand and build his own marketing strategy and promotion alongside GlobalShyne. With the plan in place Georgia Boy is in the process of completing his debut Ep “Swag 101” and is in the works of making his first debut back on the scene on DJ Konstant’s “The South Is in the House”mixtape dropping soon.