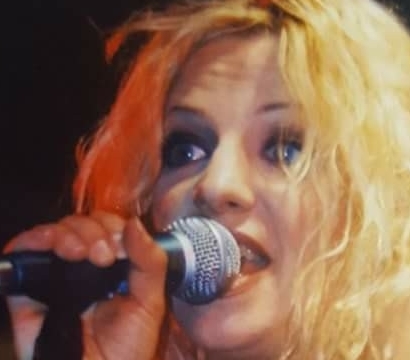 Gigi Hangach is an American singer and songwriter who was born and raised in the Cleveland, Ohio area. She grew up in a musically inclined family where she fondly remembers her Mother singing who had a beautiful voice.

Her dad who was adopted as a child grew up in a family that was musically talented as well. Years later Gigi came to realize her musical drive was from her father.

As a child Gigi and her sister Nina had a dream of being in a band and thought of forming it with two other childhood friends, musically her influences were Black Sabbath and later on Queen and Cheap Trick.

Gigi was labeled as a misfit due to growing up in a Catholic School and loving rock music as you can tell that did not stand well with the nuns of the school Gigi and her sister were constantly in trouble due to bringing rock music magazines into school. Gigi remembers the one time a nun saw one of the magazines with the late great Freddie Mercury on the cover the nun snatched it out of her hands and stomped on it.

When Gigi was around 12 years old she saw her first concert which was Queen it was around that time she decided to become a singer. At the time Gigi did not care for the female singers ( this was when Stevie Nicks, Heart, Pat Benatar were at their peak ) as idols at that time.

Gigi was jealous of Pat Benatar because she was doing what she wanted to do and that was be on the stage and sing !! As Gigi grew up she got into the cover band scene in the Cleveland area. A few years go by and she decided to move out to L.A. and become one of the many in hope of pursuing her career as a singer.

Gigi had an acquaintance that happened to know future Phantom Blue band mates Michelle Meldrum and Nicole Couch he said to these ladies I know a singer that could possibly be what you are looking for. Gigi had a demo on her answering machine so the ladies called, heard the demo the rest is now history.

During her time with Phantom Blue she recorded 3 albums and 1 live album. Their self titled debut Phantom Blue which was released by Shrapnel Records in 1989, followed by their major label debut Built to Perform in 1993 with Geffen records, followed by an EP Prime Cuts and Glazed Donuts in 1995, their album Caught Live ! was released in 1997.

Gigi would not share the stage with the Phantom Blue ladies again until 2009 to celebrate the life and career of founding member Michelle Meldrum-Norum who passed away in May of 2008 due to a cystic growth on her brain.

Gigi like many other women in the rock music industry wanted to be known for her talents rather than her good looks. Her goal at the time was to sound androgynous and have you be shocked when you finally met her and realized that the voice you heard was coming from a woman and not a male.

These days you can find Gigi in Las Vegas rocking out at a show sometimes with her sister Nina. On occasion getting up on stage singing a song or two with friends. She is also an advocate for animal rights.

Currently Gigi is working on a new project:

On Guitar- Courtney Cox (Guitarist for The Iron Maidens).

On Drums- Linda McDonald (Drummer for The Iron Maidens).

Update Required To play the media you will need to either update your browser to a recent version or update your Flash plugin.
Download
Contact Information
Gigi Hangach
Information Request