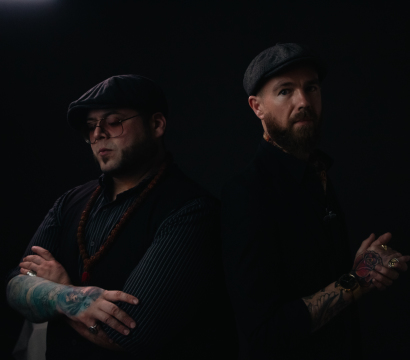 Life is far from easy. We work so hard, but the price of living gives us nothing to show for it. Dance halls and night clubs are the last refuge from the heat of the night and the daily beat downs. Infectious groves, soulful melodies, and the healing begins. We check our differences at the door. Music can save the heart of any city.

Heart of the City is a collaborative musical effort featuring Brandon Callies (Black Tie Vendetta/Brandon Callies & the American Revival) of Austin, TX, and Paco "Francisco" Estrada (South FM/Paco Estrada & One Love) of Dallas, TX aiming to furthur bridge the gap, not only between Austin and Dallas, but between division everywhere. As veterans of making albums, writting great songs, and playing live shows, the two gentlemen have teamed up to continue to bring the salvation of music into the lives of others.

"Uniquely their own, you could easily find this band playing on the streets in a bustling neighborhood or raising the roof while fans raise their feet and dance on those old hardwood floors in a dancehall. This band has a sound that grooves and is meant to pop off and echo from the buildings in a downtown area" -Cherri Bird/On Tour Monthly-

"If you're a fan of bluesy Texas rockmusic, you won't want to miss this album from Heart of the City" -Jackie Ruth/Shuffle Online-

"An unlikely pairing between two revered frontmen (Callies and Estrada), Heart of the City has allowed the two to explore new musical territory and push their creativity to new planes" -Jordan Buford/The Music Enthusiast Blog-

"Throughout the entire album, the music is consistent and just sounds solid together. Listeners can definitely appreciate the classic soul influences prevalent throughout." -Alt Revue

The Roomsound Live Session EP is now streaming on all major platforms through Hand Drawn Records and Smith Music. It was a fantastic experince working in such a stripped down fashion, so we hope you dig it as much as we do!

We have replenished our merch with new t-shirts, buttons, and posters. Houston friends, you'll have first crack at them. Get them while they last!

We've booked ourselves a run of the Rustics!

The "Just One" EP is available on all streaming platforms not! "Just One" was recorded with one mic in one take at Cloudland Studio in Fort Worth straight to tape. We loved the process, and we hope you enjoy the outcome.

Heart of the City will be releasing their new self-titled album on August 24th! Catch the band at one of their release shows!

Presale is available for our new record that will be out on August 24th. Follow the link, and grab your copy today! https://www.handdrawnpressing.com/storefront/vinyl-heart-of-the-city

The new record has been mixed and is currently being mastered. We can't wait for you to hear this thing!

We will be heading out on the Hand Drawn Records "Hand Picked Tour" starting on August 22nd!

Hole In the Wall (Austin, TX)

Main At South Side (Fort Worth, TX)

Hole In The Wall (Austin, TX)

Main at Southside (Fort Worth, TX)