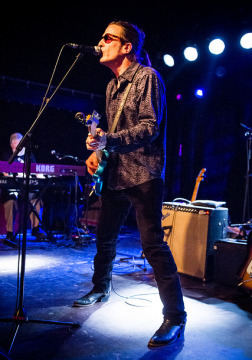 " If I had to make a choice of all the performers (at Spain's largest blues festival, Hondarribia), I would choose HOLLAND K. SMITH, who in every show he played showed an overflowing energy and an amazing stage presence with impressive versions of “Keep On Knockin'”, “Take me to the River”, “Evil”, “Stagger Lee” or the famous song he wrote for George Thorogood “Rock Party” "

"I played COBALT tonight on my show and got more calls from listeners than anything else I've ever played." - Cadillac Rob, WORT 89.9FM, Madison Wisconsin

Song playing in background is "Olhos Verdes (Green Eyes)" from the album COBALT.

"I have often heard voices and comments that were claiming for a new album of this Texas singer, guitarist and composer called Holland K. Smith. Finally there has been published this new cd, that shows all Smith’s creative abilities he displays with his relevant vocal qualities and a restrained but, at the same time, powerful, elegant and remarkable guitar technique. In this cd Holland has decided to include a mixture of sounds, ranging from blues to jazz, together with some latin details and quite a good dose of roots-rockin' blues, as well as some different aspects of soul music. Holland K. Smith is a serious musician who takes his work with an enormous responsibility, so he does not leave anything to improvisation or fate. The musicians involved in this excellent cd are Holland K. Smith guitars and vocals, Gentleman John Street keyboards, Wes Starr drums, Eric Przygocki and Ronnie James Webber bass, Ron Jones saxos, Chaz Marie vocal harmonies and the special collaboration of Anson Funderburgh on guitar in one song. As Tom Hyslop says in Blues Revue, this is an album specially devoted to people who approach Americana music with a real serious interest. GREAT!"

Promoters are working to secure dates for 2 tours in EU this coming summer.

Thanks to EllerSoul Records, the commercial success of COBALT has been more than anyone could hope for. Looking forward to touring behind the album in 2014.

COBALT debuts on the Living Blues Charts at #15

After securing the services of well known industry publicist, Frank Rozsack, COBALT was distributed to radio stations all over the world within about a two week span.

Anson Funderburgh was brought in as producer for his third recording recording project with HKS. Together he and Smith logged over 240 hours in the studio with the album.

On The Rocks- Canyon Lake TX

On The Rocks- Canyon Lake TX

Contact Information
Thanks for your interest in the Holland K Smith Band. Fill out the form on the right only if you want your email added to our list along with your question OR contact our manager directly for any questions you may have regarding bookings or band requirements: