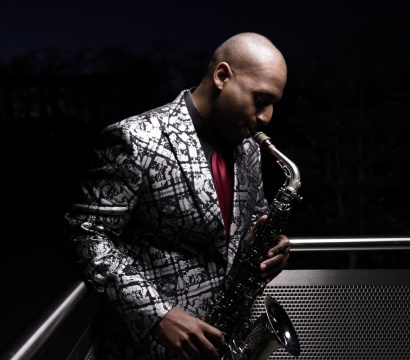 Saxophonist Jeremy Benoit "JB Saax" is a young, passionate enthusiastic jazz artist from Lafayette, Louisiana. He began playing the saxophone at the age of 9 years old at J.W. Faulk Elementary school. It was the first instrument his band director gave him to try but almost immediately he became hooked. Developing his musical talent became a constant in his life from that point on and was a big part of his academic career. After earning his Bachelor of Arts Degree in Communications from the University of Louisiana in the fall of 2008, and being an active part of multiple jazz combos there, he began his agressive pursuit of music.

Inspired by the likes of Charlie Parker, Cannonball Adderly, Grover Washington Jr., David Sanborn and Gerald Albright, JB Saax is breaking the cloud of the great sax players of all time. He is a very ardent yet diversified performer, often lighting up the stage with both well versed jazz licks and beautifully toned embellishments. While jazz is his main stay, he also performs a wide variety of music ranging from r&b to country, pop, soft rock and top 40. Gospel music has also played an important role in shaping his artistry as he was heavily involved in music and ministry at his church throughout his adolescence. He has currently produced, recorded and released over 13 musical projects. Two of these projects,  Smooth Jazz Grooves II and Jeremy Jazz are currently available for purchase.

Saxophonist Jeremy Benoit launched his band in 2010 and without an official name, his group quickly began being known as "JB Saax" & The BaND. Soon after the expansion of his group, Saxophonist Jeremy Benoit "JB Saax" began broadening the scope of his music by performing smooth jazz encompassing songs from all manner of genres including traditional jazz, gospel jazz, R&B, country, soft rock, pop, latin, africano, dance, and blues.

"JB Saax" has performed at many venues and events throughout the state of Louisiana including its acclaimed Festival Internationale, Patty In The Parc Music Festivals and Lake Charles Shrimp & Jazz Festivals. He's opened up shows for Gospel Recordings Artist Vickie Winans and Bishop Paul S. Morton, Rhythm and Blues / Swingout Artists Cupid and Wendel B, World Renown Jazz Violinist Regina Carter, and the Legendary Maze and Frankie Beverly. He has also put together a number of his own live performances and prodcutions. He can be heard performing regularly at The Brass Rom Jazz lounge in Lafayette, Louisiana, Cafe Breen in Opelousas, La, Suga's Jazz Club in Beaumont, Tx and at Townsquare Media's Jazz Alley @ The District. An enthusiastic audience of all ages follows Saxophonist Jeremy Benoit "JB Saax" as he continues to grow in his talent and range. JB Saax is totally dedicated to growing his musical voice on saxophonie while injecting joy into the lives of all those who listen to his music.

Brand new music from Saxophonist Jeremy Benoit "JB Saax" . Emotionality is now available for immediate purchase and streaming on your platform of choice. Simply go to jeremybenoitjbsaax.hearnow.com to enjoy this new music at your leisure. This album presents powerful melodies of passion and emotion and is Jeremy Benoit "JB Saax's " 17th album to date. There are 6 cuts to this album with the last track being one that was actually recorded live in downtown Lafayette.

SAXOPHONIST JEREMY BENOIT "JB SAAX" WILL BE PERFORMING LIVE WITH HIS BAND EVERY 5TH SUNDAY @ SUGA'S JAZZ CLUB IN BEAUMONT TX THROUGHOUT 2017 !!

JOIN JEREMY BENOIT "JB SAAX" & THE BAND WILL BE ENGAGED IN A 3 MONTH 2ND SUNDAY CONCERT SERIES AT THE GROUSE ROOM IN LAFAYETTE DURING THE MONTHS OF MARCH, APRIL, AND JUNE. THE FIRST SHOW WILL BE ON APRIL 9 FROM 7 TO 9 PM !! TICKETS AVAILABLE VIA EVENTBRITE!!

Lafayette's infamous St. Patrick's day festival with the one and only Connie G ... !!!

Located At the stage directly off Jefferson St.

A SPECIAL JAZZ SHOW CONSISTING OF BOTH OF SOFT ROCK & JAZZ

THE JAZZ NIGHT @ THE BRASS ROOM

Featuring Jeremy Benoit "JB Saax" & The BaND.....Held every 2nd and 4th Sunday of the Month

The Jeremy Benoit "JB Saax" Jazz Alley series. This will be a show laced with both Jazz & The Blues featuring guest blues artist Major Handy!

A Night of Smooth Jazz with Jeremy Benoit "JB Saax"

Patty In The Parc with Connie G LIVE @ Parc International

SMOOTH JAZZ AND THE MUSIC OF SADE AND CHAKKA KHAN

GREAT MUSIC FOR A GREAT CAUSE !!

OUR LADY OF LOURDES CHRISTMAS BANQUET

EDGAR MARTIN MIDDLE SCHOOL LAFAYETTE, LA ........ A COURSE OFFERED BY JEREMY BENOIT "JB SAAX" ON THE HISTORY OF JAZZ AND THE SAXOPHONE !!

FUNDRAISER FOR THE HEALING HOUSE

JB SAAX BRINGS IN THE NEW YEAR WITH A NIGHT OF SMOOTH JAZZ AT SUGA'S !!

( THIS IS A PRIVATE EVENT )

A POST VALENTINE'S DAY NIGHT OF LOVE AND SMOOTH JAZZ

TICKETS CAN BE PURCHASED FROM EVENTBRITE ( https://www.eventbrite.com/e/fifth-sunday-jazz-night-tickets-39644303178?aff=es2#tickets )

JB SAAX BRINGS IN THE NEW YEAR WITH A NIGHT OF SMOOTH JAZZ AT SUGA'S !!

Jazz For The Elderly

Making The hour happy @ one of Lafayette's coolest Social Clubs !

Sincere Condolences on the loss of Natalie Dugar's Daughter of Crowley, LA ! God is in control

Jazz @ The Naskila casino in Livingston TX / This event is private

Old school R&B and Jazz LIVE with Jeremy Benoit "JB Saax " BaND & Erica Fox! DJ Dr. Boogie will also be in the house for a night of OLD SCHOOL COOL! This event will be at MOJO's night club at Evangeline Downs in Opelousas, LA / $10.00 cover

Smooth Jazz @ Valentine's Day at one of Lafayette's Best Eatery! Come out and have a great meal and enjoy great music with the one you love at Valentine's Day!

Enjoy Jeremy Benoit "JB Saax " BaND as they Kick it Up on a Friday night !

Jazz For The Elderly

Our Lady of Lourdes

Our Lady of Lourdes

Acadiana Center For The Arts

Center Reception for Save The Arts

Jazz for Lafayette Father of The Year Banquet !

Music for the elderly residents!

JAZZ FOR THE ELDERLY / COMMUNITY SERVICE

MUSIC FOR THE ELDERLY / COMMUNITY SERVICE

THE BRASS ROOM WITH CONNIE G

Live entertainment for the elderly !

ALL SHOWS AND EVENTS WILL NOW BE ANNOUNCED THE WEEK OF / PLEASE CHECK THIS WEBSITE FREQUENTLY FOR MOST CURRENT EVENTS.

ENGAGEMENT PARTY FOR THE BUTCHERS / LIVE MUSIC ON THE RIVER

LIVE JAZZ FOR A GOOD CAUSE / TICKETED EVENT TBA

Live with the Dugar Brothers

Bringing In the New Year with Jazz at Mazen Grill Restaurant

Lafayette Downtown Jazz Brunch in front of the Grouse Room

Mass Service at our Lady of Lourdes Hospital

Live Jazz at The Biergarten Lafayette from 1 - 4 Pm

Live jazz on a Boat for a good cause!

Live Jazz on the Patio with Jeremy Benoit "JB Saax " !!

Live Jazz on the 4th of July

Jazz Brunch to Be Announced pending Opening on the NEW YEAR

Live Jazz Brunch at The Petroleum Club of Lafayette

Jazz Brunch at The Petroleum Club Lafayette - 11 am