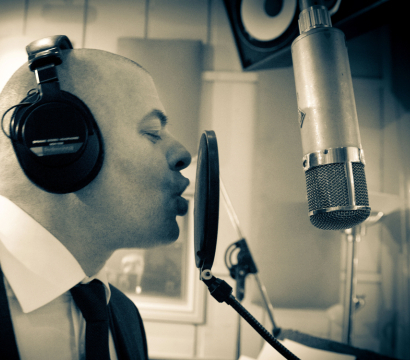 He has written and produced over one-hundred songs, one musical, composed numerous works for small ensemble - often as incidental music for dramatic theater, which includes fifteen Equity productions, and a four-year appointment as composer and music director for the Chicago Goodman Theatre’s annual production of A Christmas Carol. He has directed for video and the stage, and has appeared in films, video and on television. Frequently performing under the psuedonym Jinx Titanic, he currently fronts the band Jinx Titanic and the Ladykillers.

A 1999 Best New Artist GLAMA nominee, he has since released seven long-playing recordings of original songs, performing on six under the pseudonym “Jinx Titanic.” 2009's Americana-styled "I Want Some Sun" was released under the name John Kamys. His recordings have received three OMA (Out Music Award) nominations and the OMA for Outstanding Production. Several songs from these recordings can be heard on feature film soundtracks as well as in the documentary "Exotic World and the Burlesque Revival," and the MTV Movie Award winning spoof "United 300." He has also contributed music to numerous episodes of MTV’s "The Real World," as well as Showtime's "Look," and HBO’s "True Blood," "Cathouse," "Best of Cathouse," and "Cathouse All Stars."

As a creative consultant and commercial writer, his focus lies primarily within the Beauty, Design, Fragrance and Fashion Industries. His extensive work in these areas includes four years as Artistic Director and Show Producer for Sally Beauty Company, and two years as Artistic Director and Show Producer for SoftSheen-Carson. He has served as Editor in Chief for THIRDMAN Inc., creative directing all media content for the luxury brand THIRDMAN Eau de Cologne, and as Social Media Director for Avery Perfume Galleries, the retail concept of Intertrade Group, leaders in the haut de gamme perfumery sector.

John Kamys was born in Chicago, Illinois, and is a graduate of DePaul University. He is a member of The American Society of Composers, Authors and Publishers (ASCAP). His recorded works are administered through Big Dixie Publishing (ASCAP). Licensing is also available through Music Dealers Publishing. In addition, he is a certified Bikram Yoga Instructor, having trained directly with Bikram Choudhury, and teaches this form of Hatha Yoga throughout the world.