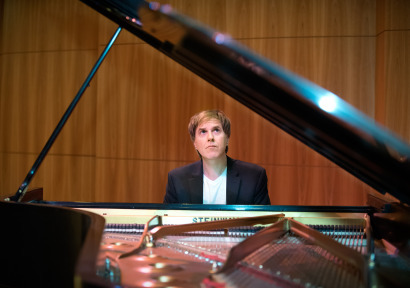 The Star Phoenix, by Cam Fuller

"You can travel a long way on your fingers.

Jon Ballantyne’s took him to New York City where they play with other very talented and famous fingers. So you have to hand it Ballantyne for not forgetting his hometown. Every return is special, whether it’s to pick up a Juno Award, as he did in 2007, or as a touring musician. In this case, he’s on the road and was honoured to be opening for the Charles Lloyd Quartet at the Broadway Theatre on Wednesday night.

Ballantyne shared a family memory of his parents when they saw Lloyd perform in Saskatoon in the late 1960s — with Keith Jarrett on piano.

“They still talk about it as if it had happened last week.”

That love of jazz influenced Ballantyne’s life path, a gift that was returned to an appreciative crowd.

You can still detect a small-city humility in the affable Ballantyne’s playing — no needless showing off, though you’re wowed anyway, and everything in service of the tune. He opened with Without a Song “with slightly altered chord changes,” and found all kinds of notes between those 88 keys.

Thank Jones, a lacy, delicate piece, contrasted beautifully with the funky, busy, adventurous Freedom Jazz Dance. It started with deep stomping notes and, at one point, required the player to reach into the body of the piano to mute a string. It was a little like witnessing open heart surgery."

"Jon Ballantyne starts the Ottawa Jazz Festival with complex melodies" (review) ...At 8 p.m., pianist Jon Ballantyne, who has lived and worked in NYC for many years now, presented a truly satisfying solo set. While rooted in his long experience playing with jazz giants like Joe Henderson, the music was emphatically in his own voice. Over 75 minutes, Ballantyne presented pieces ranging from standards like “Lush Life”, to bop classics by Wayne Shorter, Eddie Harris, and Ornette Coleman, to his own material. In many cases, he linked them back to the jazz tradition. Noting that it was Eric Dolphy's birthday, he talked about how he tried to capture Dolphy's spirit in his composition “Round Again”, and how much he enjoyed playing the piece – twice! –with saxophonist Dewey Redman and clarinetist Douglas Yates on one of his CDs. And he mentioned how his opening piece, “Beatrice”, was Joe Henderson's favourite tune: “as many great tunes as Joe wrote, that seemed to be the one constant tune from gig to gig.” Each piece was reinvented: sometimes with a delicate tracery of notes, sometimes with supple ripples of sound. In Harris' “Freedom Jazz Dance”, for example, he played to either end of the piano, with deep bass rumbles underlying flickering treble notes. “Round Again”reminded me of water pouring over fast rapids, the bass notes propelling the piece and the treble splashing on top. “Scotch Neat” contained multiple light layers of sound. But that didn't remove the jazz feel or the melodies. “(T)Hank Jones” may have been an unconventional ballad, with its dense and dramatic feel, but it was still recognizably a ballad. The rapid flow of ideas in “Beatrice” enhanced rather than hid its melody. The closing number,“When Will the Blues Leave” by Ornette Coleman, was undoubtedly a blues – with lots of bright accents. Ballantyne kept the music intellectually interesting, but never lost its emotional content. Ultimately it was simply fun to listen to even if you didn't want to analyse it. With very attentive listeners, he was also friendly and approachable throughout, explaining the songs and clearly enjoying the experience. The audience responded in kind, and greeted the end of the show with a standing ovation. – Alayne McGregor

...The Alan Jones Canadian All Star Sextet [of which featured Jon Ballantyne], one of the best jazz concerts of the 2013 TD Toronto Jazz Festival.   by Paul J. Youngman, LJN Review

…The best concert of the day, for my money, was pianist Jon Ballantyne’s at the Memorial Art Gallery…   Democrat and Chronicle (Rochester NY; reviewing Int'l Jazz Festival)

..."His embellishments spare and well-placed, Ballantyne focused on crafting tonal ideas and beautiful lyrical passages. Yet at times he was also brash in his obvious command of the piano, pulling out pulsing bass line and utilizing the instrument to its full potential in solo performance."   Star Phoenix

...The 4 pm Connoisseur Series at the Library and Archives Canada theatre presented yet another outstanding performance, this time from Canadian expat pianist Jon Ballantyne and his outstanding quartet…   All About Jazz

..."He often piled on these dense, rumbling left-hand figures, reworking ideas over and over, turning his sources into thick, complex abstractions."   The Globe and Mail

...Although Jon Ballantyne has been a top-notch pianist for nearly half his life, the 41-year old New Yorker said that he's been mulling the question: "Have I got something original to offer?" At the Library and Archives Canada auditorium yesterday, the Saskatchewan native's quartet supplied the musical answer-a brash, audacious Yes. …Ballantyne is definitely onto something original and worthy of greater attention.   Peter Hum, Ottawa Citizen

..."There’s a barrelhouse presence in the hands, which seem to float until they land with precision on a big chord"   The Star Phoenix

…A MUCH APPRECIATED CONCERT IN THE Museum of Modern Art was performed by the duo of Swedish saxophonist Kirster Andersson and New York pianist Jon Ballantyne: the climax of the festival, at least one of them.   SmeJuornalen, (Malardalen, Stockholm, Sweden)

…Ballantyne delivered a memorable performance at Theatre Gesu (Montreal Jazz Festival) in a trio with bassist Drew Gress and drummer Gene Jackson. It was an opportunity to appreciate Ballantyne’s unusual compositions and out-of-the-way voicings on piano.   The Montreal Gazette

…Merely as fine a young, modern pianist as you’re likely to encounter this decade…   The Toronto Star

... There has been a disproportionate number of pianists among Canada’s jazz exports in recent years. The country that gave the world Oscar Peterson and Paul Blay back in the 1950’s has sent a half-dozen interesting younger players New York’s way of late…No one in that group is more interesting, no one fresher, than Jon Ballantyne, who worked a few years ago with tenor saxophone star Joe Henderson but has otherwise pursued a career under his own name. As well he might: He’s far too self-directed a jazz musician to swing to any drummer but his own

.…The music was tremendously exiting and, in terms of it’s individuality, s step or two beyond anything Ballantyne’s contemporaries have played on the Senator’s grand piano.   The Globe and Mail

…Jon Ballantyne brought exceptional virtuosity to bear on the 88’s at the Library Theatre.   Edmonton Journal

…Progressions that had an Eastern flavor would overlap with sounds that brought to mind vintage New Orleans pianist and the embracing melodies of standards would give way to jarring explorations that were suddenly reeled into another sphere.   The Edmonton Sun

…The pianist’s style is almost the opposite of the Oscar Peterson school of playing, leaving lots of space between notes rather than obliged to fill them in with technique, of which he has plenty.   The Windsor Star

…Ballantyne was as good as it gets on piano, with solos on Monk’s Ask Me now and Ellington’s Take the Coltrane that will rattle around the memory bank for quite a while.

…It was an encyclopedic performance, drawing liberally from every period of jazz history and weaving those elements into a resolutely modern, bristlingly individualistic statement   The Montreal Gazette

The Deer Head Inn with Phil Woods and COTA

Next to Hotel Bethlehem, Beth., PA. With GT3.

The Yard and Ale; with the Bill Goodwin/Adam Niewood Quartet

The Yard and Ale; with the Bill Goodwin/Adam Niewood Quartet

DWG, PA. All Phill Woods penned charts with his COTA Big Band. In memory of and tribute to of one of the greats, Phil Woods, who passed away September 29, 2015. Directed by Matt Vashlishan, alto. Featuring Bill Godwin, drums. JB, piano.

With Rich Jenkins and Adam Niewood

Honored to be subbing for Bobby Avey, in concert with David Liebman's incredible new band, playing the music of Miles Davis and John Coltrane.

The Deer Head Inn, With Vincent Herring and Greg Abate

with Joe Michaels and Adam Niewood

Bill, a wonderful guitarist, played often with Joe Henderson from 1969-1971 (the band with George Cables, Lenny White, Stanley Clarke), and I did as well (with Roy Haynes, Herbie Lewis, Billy Drummond, Mike Hyman, et al) but my stint was from 1989-1992.

We are going to play duo, all Joe Henderson tunes, or Joe-related tunes!

Bill and I both played with Joe Henderson at different times (Bill 1969-71, Me 1988-1992), and the previous gig we played in this context at the Deer Head well exceeded our expectations. Hope you'll join us!

Trio at The Bar With No Name

*Proceeds from this fundraiser will be used to provide a scholarship to an alto saxophone student at COTA CampJazz 2018. If you can’t make the fundraiser, you can donate at campjazz.org or send a check to CampJazz, Post Office Box 612, Delaware Water Gap, PA 18327. Please be sure to designate your contribution for the Phil Woods Scholarship Fund.

This restaurant received a GREAT review in the NY Times. A culinary delight if there ever was one! Very hip people, great vibe.

With Paul Rostock Quartet in concert

The Deer Head Inn, with Bill Goodwin and Friends

The Deer Head Inn with the Greg Abate Band

The Deer Head Inn, with the Matt Vashlishan Quartet

Playing Jazz Organ on this one!

With the Bill Goodwin Trio

Greatest Jazz Concert in the History of Saskatchewan

I'll be playing piano in a big band with this great group of players!

The Deer Head Inn, Trio CANCELLED due to PANDEMIC

The Deer Head Inn, Trio CANCELLED due to PANDEMIC

The Grange, Warwick NY CANCELLED due to PANDEMIC

Church on the Mountain, DWG, PA

"A Special Tribute to Miles Davis"

The Stabin Museum: With the Bill Goodwin Trio

The Stabin Museum: Fundraiser for Ukraine

Gazebo at the Church on the Mountain

"The Parker Trio" In Concert. The Wilder Room

Playing with the Saskatchewan Jazz Orchestra under the direction of Dean McNeill and special guest, composer/conductor Fred Stride

Performing 4 movements from the "Saskatchewan Suite" (Fred Stride, composer), among other works.