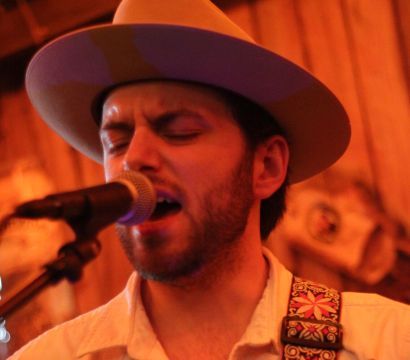 With his debut record, Barefoot'd Blues, set to release sometime in 2018, Justin says you can expect to hear a lot of groove, R&B, blues and rock-and-roll. But until that record releases, he continues to play gigs (nearly 175 a year of them) for people all over the DFW area.

Justin has been writing songs for well over a decade, playing guitar since he was 3 and played his first gig in 2012 in front of friends and family near his hometown. He first developed his love for music through his father who introduced him to Steve Earle, Tom Petty, The Band of Heathens, Little Feat, Ray Wylie Hubbard, John Lee Hooker, and more. Through that, Justin found his own favorites such as The Beatles, Rolling Stones, Bob Dylan, Blackberry Smoke, Grateful Dead, Gary Clark, Jr., and more. He recalls how his love for music developed below:

Justin first developed his love for music when he stumbled across old-time country artists such as Steve Earle, Townes Van Zandt and Guy Clark. "I remember having this realization that not only was this music not like anything I had ever heard, but it had meaning. And it made me feel emotions I had never felt before." he recalls. "But most of it was also incredibly sad. 'Lonelier Than This' by Steve Earle is still the saddest song I've ever heard".

He went on to play Steve Earle records over and over again, until his Dad came home from Mississippi with a John Lee Hooker record for him. "People think of blues music as sad-my-baby-done-left-me music. But really, it's happy music. Especially when you give it a touch of rock-and-roll." says Justin. "I played that John Lee Hooker record as loud as I could. I jammed to it like you wouldn't believe. My friends thought I was crazy".

Other influences eventually came along once he discovered the legends such as Bob Dylan, Grateful Dead, Tom Petty, etc. but nobody made a bigger impact on him than two acts from Austin, Texas: Gary Clark, Jr. and The Band of Heathens.

"My first concert was a Band of Heathens show in August of 2009 and afterwards my dad told me: 'I hate that this was your first show, because no other show will be that good. You will be utterly disappointed for the rest of your life'" Justin recalls. "And it's rang true".

Back
You Tube
Back