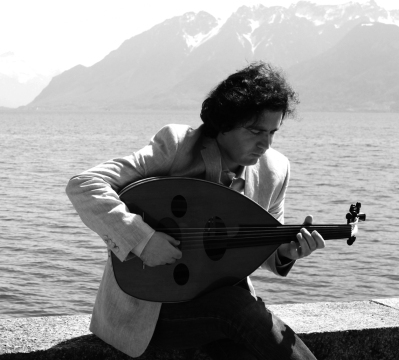 Kenan Adnawi is a well established Oud virtuoso from Syria. He started playing Oud at the age of 7. Since then, he went through perfecting his performance earning him a long list of awards and an impeccable reputation at an International level. Adnawi performs as a soloist and as part of ensembles and orchestras in some of the major international events and venues and alongside some the world-renouned artists such as Marcel Khalifa and Bryan Adams.

Adnawi's utmost interest in world music has led him to collaborate with a plethora of artists from around the world and from different musical backgrounds. His passion: creating new music and new ways of improvisation and composition for the Oud by incorporating novel techniques, scales, and improvising ideas from other world music traditions.

Adnawi's concerts are famous for their experimental rhythms and sounds that engage the audience in new musical experiences every time. Adnawi receives a great deal of support to continue to perform and express new ideas for this kind of music improvisation. It is especially gratifying to introduce the Oud, an instrument mostly known in the Middle East, the Arab World and countries such as Turkey Greece and the Balkans, to audiences around the world.

Kenan Adnawi joined the High Music Institute of Damascus, Syria in 2003 where he studied Oud with Azerbaijani, expert Askar Ali Akbar before he graduated in 2008. Adnawi has since accompanied Marcel Khalife in his Al-Mayadeen Ensemble in Morocco, United Arab Emirates, Austria, Lebanon and many other places around the globe. He has also played with the Qatar Philharmonic, under the direction of world renowned Maestro Lorin Maazel, for its inaugural concert in October 2008. He toured with the Qatar Philharmonic in 2009, and performed at the Kennedy Center in Washington DC, Theater des Champs-Elysees in Paris, La Scala in Milan, and Teatro Massimo in Palermo where he performed the Arabian Concerto composed by Marcel Khalife. In 2009, he won first place in the International Oud Competition in Beirut, Lebanon. He since participated in major Festivals around the world.

Adnawi lives inthe United States while touring some major national and international festivals. Adnawi is currenlty enrolled in an MA in Contemporary Music at the New England Conservatory.