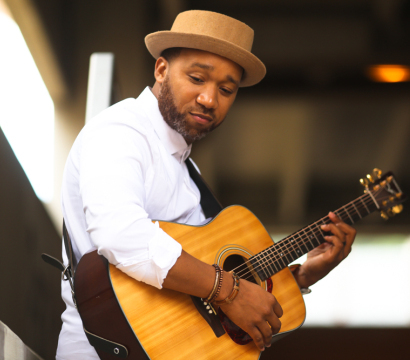 Singer, songwriter, and acoustic guitarist Kerry Thomas (known as “KT” by fans) has built a strong and dedicated following among those who have experienced his music. A captivating performer, Kerry’s sound is a diverse mix of pop, R&B, and neo-soul.
A self-taught guitarist, Kerry’s desire to play was sparked from observing the guitar skills of John Mayer. Kerry also cites Luther Vandross, Marvin Gaye, Musiq Soulchild and John Legend as the powerhouse that has influenced his musical style.

Kerry was born in Baton Rogue, LA, and currently resides in Jackson, MS. He plays regularly in Jackson, MS, as well as a host of other venues within the state. He has also traveled to play at venues in Dallas, TX, Houston, TX, Atlanta, GA, Chicago, IL and New Orleans, LA. Kerry appeared in concert during the Essence Music Festival at the House of Blues in New Orleans, LA, with rapper PyInfamous, winner of the Coors Light’s “Search for the Coldest MC” contest. Recording artists PAC DIV and N.E.R.D. were also a part of the lineup. Kerry was also invited to open for Grammy award winning singer/songwriter Kandi Burruss at the NAACP Johndelle Johnson Freedom Fund Dinner in Atlanta, GA. Kerry has opened for the Rebellious Soul Tour featuring national recording artists Jon B, Carl Thomas, and K. Michelle. He has had the opportunity to open for the legendary Keith Sweat live in Biloxi, Mississippi. Kerry was the recipient of a Jackson Music Award for Best Male Vocalist. In 2012, 2013, and 2016 Kerry has won the Jackson Free Press “Best Of Jackson” Award for Best R&B Artist.

Although Kerry’s live shows include his rendition of various cover tunes, he is best known for his original music. Gaining inspiration from personal past experiences, as well as those of his friends and family, Kerry’s desire is for his music to be relatable and takes the view that “music is more than sound, it’s a reflection of its creator” His debut EP entitled “Eye of the Storm” debuted at #1 in the Amazon Soul Category during its release week and is available now on iTunes, Amazon and Apple Music. Kerry’s sophomore EP, titled “After the High”, was released on June 27, 2016 and is available now on iTunes and all digital markets.

The official video for The Waves has been selected to the CrossRoads Film Festival. It will be shown at Malco Grandview Cinema April 8 at 730pm!

New Music from Kerry Thomas, After the High. Available NOW.

First Single from After the High, Come Be With Me

Kerry Thomas release first single from After the High called, "Come Be WIth Me."

Kerry Thomas and his band had the opportunity to open for the Legendary Keith Sweat.

Kerry Thomas lands role in Get On Up!

Kerry Thomas lands a role in the James Brown Biopic "Get On Up" in theaters August 2014.

The Eye of the Storm EP Sales

Eye of the Storm debuted #1 in Amazon's Soul Category for Hot New Releases! THANK YOU FOR THE SUPPORT!

The Eye of the Storm EP

R&B Artist Kerry Thomas will be performing LIVE with a full band at the NEWLY RENOVATED Suite 106. Come out and enjoy smooth melodies and intriguing conversation at Jackson's premier urban lounge.

Special Guests will be in the building!!!

R&B Artist Kerry Thomas will be performing LIVE with a full band at the NEWLY RENOVATED Suite 106. Come out and enjoy smooth melodies and intriguing conversation at Jackson's premier urban lounge.

Special Guests will be in the building!!!

Live performance with a full band!

Back to Basics: R&B Edition

This Saturday at Suite 106 Back to Basics will feature R&B Artists! LAV and Jarez will be performing live as well as other guests including Kerry Thomas. Doors open at 9 PM. Show starts at 10PM. $5 cover! Come out and enjoy live music from some of Jackson's own.

The Showcase: A Night of R&B

R&B is alive and well in the city. Saturday August 25, The Showcase is back at Suite 106! Come out and enjoy smooth melodies in a great atmosphere. Talented singers will be in the building!

Grand Opening for THE ISH Grill and Bar

Kerry Thomas and the Band "Not Your Lover. Not Your Friend"

Kerry Thomas Performing with the band "Not Your Lover, Not Your Friend."

Debut release of the EP!

An acoustic set from 6-8pm

Kerry Thomas will be performing an acoustic set for Nissan's Event! Kerry Thomas + His Guitar (Rachel) + Your favorite tunes = A great time...

Music Under the Moss with Kerry Thomas and Band

Kerry Thomas and Band LIVE at the U!

Six in the City Event

Come out for a Pre-Valentine's Day celebration! You don't want to miss it!

Special Thanks to our sponsors!!!!

Love and Laughs. Performing Live: A1 and Kerry Thomas

Power of the Mic Comedy Show.

LIVE BAND! WE are ready to rock out at one of Jackson's PREMIERE restaurants. R&B and a great atmosphere.

Acoustic Set at One Block East. 9-11pm. See you there.

Acoustic Set LIVE on the patio

Contact Information
Kerry Thomas is available for your event! Please fill out the information request for with details regarding your event.
Information Request