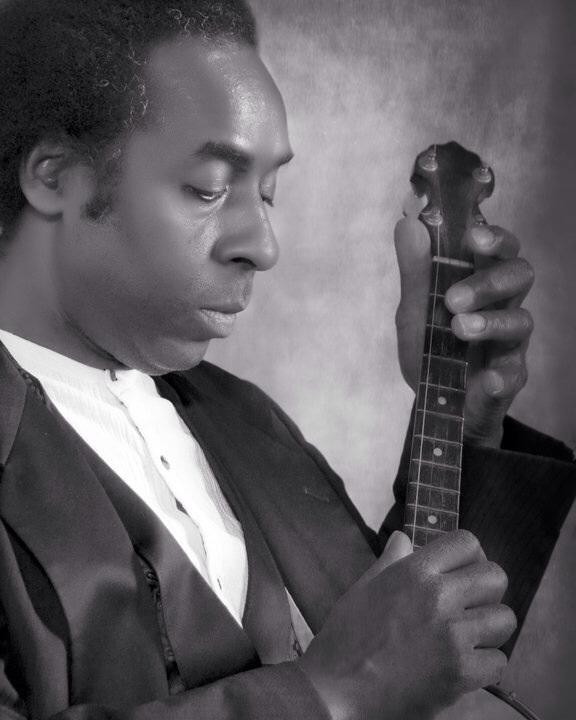 When you hear Lem perform blues and traditional music you are reminded that this is music we once danced, clapped and sang along to. It doesn’t take long after he launches into The Crawdad Song or John Henry that a four or five year old is seen dancing around in front of the stage. His bluesy rendition of a Spiritual brings out the humming and swaying from anyone who knows them.
His voice trained by Dr. Eva Jessey- the Grand Dame of American Music, can move seamlessly from a baritone with its full richness while singing a Spiritual or a Folk holler, to juke joint bluesy tenor.
Sometimes while discussing the origins of the St. Louis Blues lem picks up the tenor banjo and gives the audience a chance to hear what W.C. Handy might have heard in that train station in Mississippi that made him the father of the blues. Lem not only plays bottle neck guitar but he takes you on a journey through history to teach you why the Delta Bluesmen called it “Spanish Tuning” when they tuned their guitars this special way.
You can tell that Lem hasn’t forgotten his Kansas City jazz roots when he plays music from the Harlem Renaissance or something from Gershwin’s Porgy and Bess that he learned from Eva Jessey, the folk opera’s original choral director. To share with the audience where it all came from, Lem likes to end many of his concerts with a crowd favorite, his arrangement of the West African folk song Take Time

"This was an excellent program and far exceed my expectations. Mr. Sheppard did a wonderful job of talking about how Kansas artists influenced music and literary works from the 1850’s to the 1920’s and the use of songs throughout the presentation only added to the effectiveness of the program. He was incredibly knowledgeable and personable and was able to answer all questions the audience had. The audience was incredibly impressed and appreciative of his driving to Goodland and his presentation."

Program Descriptions:
Kansas History and the Harlem Renaissance
The booming, experimental period in American history known as the Harlem Renaissance exposed world to the flourishing arts, culture, and intellect of African Americans. But it was also a time of struggle, when white society failed to respond to issues of civil rights and social equality. Could art produced by African Americans primarily for African Americans succeed where politics, religion, and the courts failed? It was a tall order, but not for residents of Harlem, New York, where young Black men and women with college degrees worked and lived. This generation was determined to chart a new course far beyond their parents and grandparents, many who had been enslaved. Using jazz, blues, spirituals, and poetry, this presentation will span the 1920s and explore the contributions of Kansas artists who answered the call to this unmistakable moment. Presented by Lem Sheppard.

The Pursuit of Music 1860-1920 African Americans in Kansas

The musical activities of African Americans from about 1860 to 1920 are part of an untold story in Kansas history. They were active in; stringbands, mandolin quartets, cornet bands, orchestras and as itinerant musicians and jubilee singers. They performed at venues in many cities as well as in private homes of the elite and “furnished” music for; barn dances, fairs, weddings and civic events. Lem Sheppard will be presenting a program of this music taken from the pages of Kansas history. Some of the songs will be familiar as they were popular songs of the day, but the people and places are a unique chapter in Kansas history.

Coming soon, Lem will be producing new mini programs for online audiences. They will be updated monthly  and you can feel free to download and share them. You can also support these efforts through paypal.me/lemlive Just click on  the VIDEO menu

Funding for Kansas and MAAA touring

1999 Congressional Committee selects Lemuel to represent Kansas in a solo performance at The Kennedy Center for Performing Arts.

1996 UNESCO sponsored performance at the International Eisteddfod in Johannesburg, South Africa. Lemuel was the first American to perform there after the lifting of Apartheid.

1985 Artist on the Kansas Arts Commission's Artist in Residence

1983 MM in Theory and Composition from Pittsburg State University