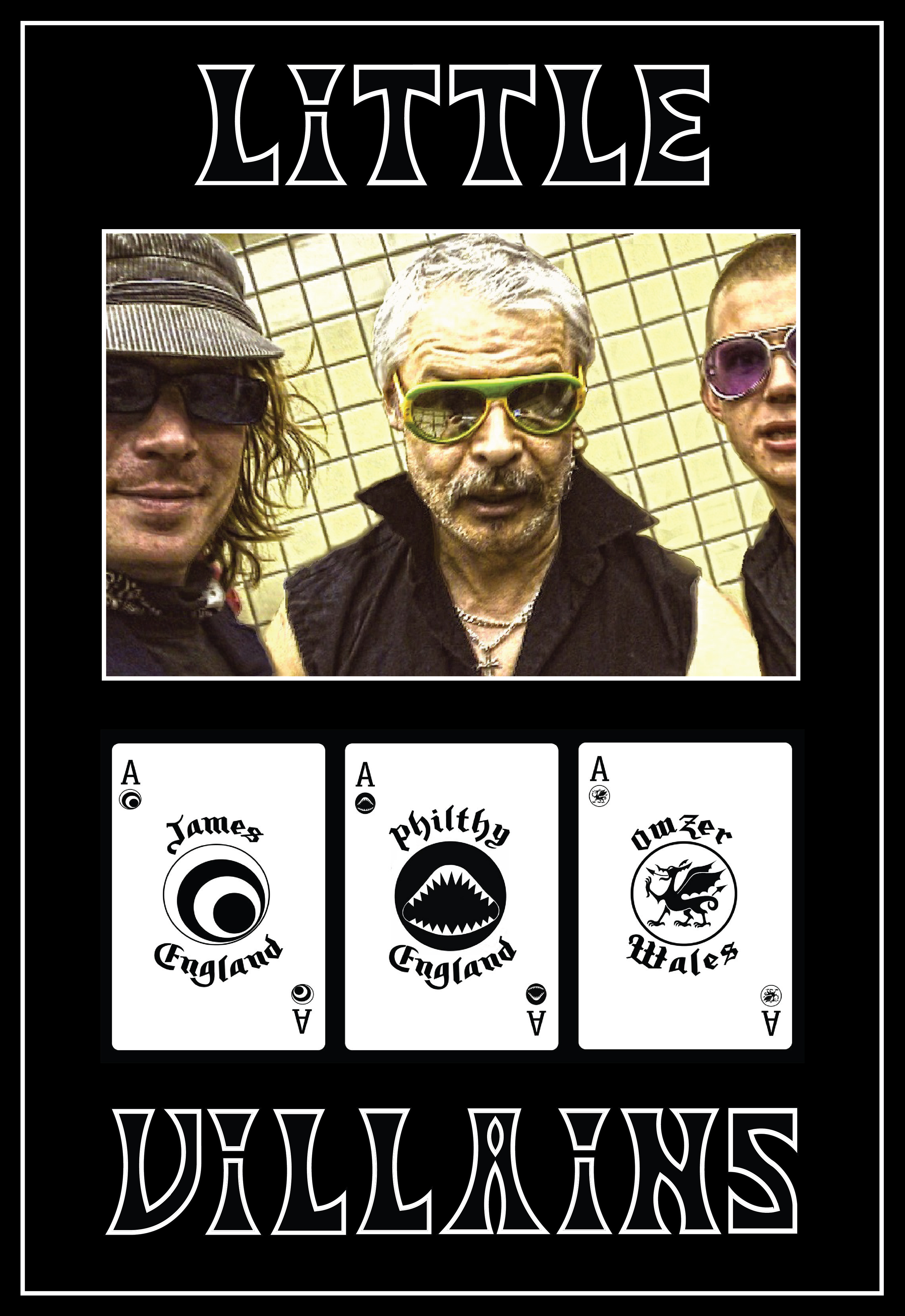 LITTLE VILLAINS were formed in 2006 by none other than the legendary MOTÖRHEAD drummer Phil “Philthy Animal”Taylor, Mr James Childs of AVON & UK rock group AIRBUS and the Welsh bass player - Owen Street of desert rockers WAXY & sludge group VAILS.
The band plays hard and heavy rock and roll, that’s it!
Unfortunately Philthy is no longer with us but, his music shines on in true Motörspirit with his exceptional performance on the LITTLE VILLAINS ‘Philthy Lies’ album proving his explosive drumming technique was more than intact many years after his departure from MOTÖRHEAD!
Despite personal circumstance preventing the band from ever breaking out, it has now been decided that the music deserves to be heard with the band signing to HEAVY PSYCH SOUNDS and will be represented by James , Owen & the very capable AIRBUS drummer Chris Fielden to continue the group’s legacy and grow!

As fate would have it, two British musicians met by chance at an electronics store on the other side of the world in Los Angeles, California.

With a smirk one of them said, “You probably recognize me don’t you?”

The other snickered and replied, “Yeah, no shit!”

With that, the two locked into familiar British humour in between the ‘what the fuck brought you here’ conversation.

P: “What are you doing on Monday?”

Seemingly impressed with each other’s cars – a black 1970’s Corvette Stingray hot rod and a Porsche 924 sporting a Union Jack paint job – they sped away, back into the Jungle.

Over a large tasty jacket spud and a homemade schlop, LITTLE VILLAINS were formed by the one and only Philthy Animal Taylor formerly of MOTÖRHEAD and Mr James Alexander Childs of AVON.

Regular jamming ensued with a lot of ideas being demoed in-between endless banter and stories of the road.

2005 rolled around and James headed off on the road in support of the Vic du Monte’s IDIOT PRAYER and PERSONA NON GRATA releases.

Backstage at a show in the UK, James was impressed that a group of lads had travelled all the way from Swansea in Wales to Bristol to see the band, as explained by a rather rowdy young lad called Owen Street.

He hooked up a show with his band The Buffalo Kings in Swansea where James saw him shred the bass guitar for the first time and immediately invited him to LA to jam with Philthy.

The LITTLE VILLAINS line-up was complete!

After some crazy nights, jamming and living the dream, LITTLE VILLAINS were ready for the studio.

In February 2007, James accompanied Phil to his lockup to locate Phil’s original DW drum kit from 1982 for the session at Unit A studio in Palm Springs, California, where tracks for the Philthy Lies album were laid down.

After the sessions, James and Phil discussed management and the possible future for the band. They both decided that circumstances beyond their control would prevent them from pursuing it any further. However, they agreed to continue to record for fun.

So, with that, James continued his career with Vic du Monte’s PERSONA NON GRATA and formed AVON .

Unfortunately, Philthy was taken ill in 2011 and would leave the USA for good, returning to the UK where he eventually passed away in 2015.

In 2018, after much deliberation, James decided to locate the 2 inch reels from the sessions and finish work on the album.

Philthy Lies is like one last stand, and a fitting epitaph for one of the world’s very best rock ‘n’ roll drummers.

The very capable British rock drummer Chris Fielden will be joining Little Villains in 2019 for tour and any future recording.

Chris and James are also members of the UK rock group Airbus.

Chris, James and Owen have all worked together on various tours and already have a unique rapport!

On this day as if Heaven sent from Philthy himself, Little Villains signed to Heavy Psych Sounds records for the release of their debut album 'Philthy Lies'.