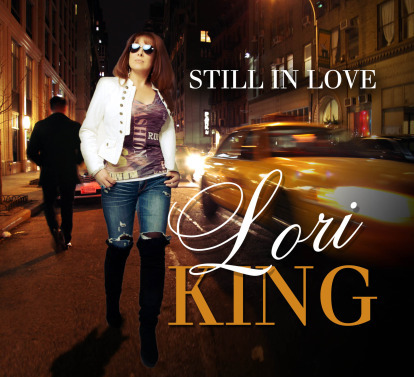 CHECK OUT "STILL IN LOVE" BUY LINKS AND SMOOTHJAZZ.COM INFO IN THE EXTENDED MENU BAR AT THE TOP OF THIS PAGE!

Lori King is a native Detroit performer with an undeniably unique voice. A seasoned performer and songwriter, Lori has had the opportunity to touch audiences all over the world. Not only in major cities in the United States, but across the waters to places like London, England; Gothenburg, Sweden; and Cannes, France.

Lori's vocal talent has recently garnered her the Indie Music Channel Award for "Best Female R&B Vocalist of the Year" at the famed 'House of Blues' ceremony in Hollywood, California. Her original, soulful, sultry sound captivates an audience in an experience, leading them down a road that links them to the raw passion of her craft. Best described as the perfect blend of soul, R&B, and pop, with jazz influences, her critics have used words such as “…Fresh, New, and Real…” to describe her refreshing talents. From breathy nuances to powerhouse tones, the range and power of her voice takes the listener on a dynamic journey allowing for the excitement and intimacy of a song to become an experience that they will not soon forget. With her brand new CD "Still In Love" ready to debut, the time has come for the world to know Lori King.

Lori’s voice and songwriting caught the ear of Multi-Grammy Award Winning Producer Michael J. Powell (Anita Baker, Aretha Franklin, Rachell Farrell, Randy Crawford, TLC, R Kelly…etc) and he immediately agreed to go into production with Lori on this very album. The result is a collaborated creation of timeless music with soulful pop, R&B, and jazz influences. As one intrigued fan put it, "Lori King has a very interesting sound that draws you in.” Lori King – 'Still In Love', Produced by Michael J Powell, is ready to touch listeners across the globe and share the experience of life and love.

Now completed and ready for release, Lori is extremely excited to deliver her music and talents to larger audiences around the U.S. and abroad once again.

Lori King's music can now be heard World Wide on PANDORA Radio.  The album "Still In Love" has been accepted in its entirety on the worlds best way to experience music!  Fans can now create their very own Lori King Radio Station!

This silky jazz/pop/R&B debut from vocalist Lori King Still In Love has more than promise. It has a strong presence, great vocals, great arrangements, and never a moment when you can’t find that sexy, smoky jazz element setting atop this otherwise R&B-dominated album.

As lovely as her voice, this new light in our jazz house will be most welcome with her strong, sassy, and often bluesy style. This is a voice that truly calls, convinces, and motivates.

Combining great intonation, intensity, soul, some blues grittiness with a bit of that rock power, and plain ol’ good melodies will get this artist much attention. Of that, I have little doubt.

While there are no rough-and-tumble funky groovers, you will absolutely either fall in love with or take serious note of King’s soul-deep intensity on high-steppin’ tracks like “Lovin’ You Lovin’ Me” and the rousing cover of Stevie Wonder’s classic “Signed, Sealed, Delivered.” Combine that with the mid-tempo lead track “Unexpected” with its swagger and “Love Is Waiting” along with all of the swaying, sexy numbers that set that romantic table of love like the beautiful “In Time,” the pop-influenced title track, and Bread’s “Make it With You,” and you’ve got all you need. Yeah, there’s plenty here to get the love groove in the house.

With Michael Powell on guitar and Al Turner handling the bass duties, along with some very capable backup vocalists like Janelle Robinson, King has stacked this deck in her favor much to the pleasure of the listener. Still in Love should easily keep you that way. – Ronald Jackson

I recently became acquainted with the music of vocalist and Detroit native Lori King who has teamed with Grammy Award winning producer Michael J. Powell for her debut CD ‘Still In Love’. With eight original tunes and two top-notch covers that blend soul, pop, R&B, and contemporary jazz in an invitingly ‘blue-eyed’ kind of a way, it’s a recording that goes well beyond the interesting.

A case in point is Lori’s take on the Stevie Wonder classic ‘Signed, Sealed, Delivered’ that she absolutely nails while very different but just as good is her rendition of the David Gates Bread classic ‘I Want To Make It With You’. The title cut has a smoky quality well worth checking out yet the track that perhaps works best is ‘Lovin’ You Lovin’ Me’. With a bluesy earthiness and a vibe somewhat reminiscent of the Rolling Stones classic ‘Miss You’ this is Lori King at her very best.     -Denis Poole

Going Global! Album Review from Patrick Van de Wiele / Netherlands / On the site www.keysandchords.com / written in Dutch (so cool) you can use Google Translate to any language.

Use Google Translate.  We wanted to post the Dutch language review because it's just cool to know that people all around the world are enjoying Lori King's debut album "Still In Love"!!

A sultry mix of soulful songs with jazzy influences. A debut to cherish!

The album "Still In Love" releases globally on Smooth Jazz Global Radio and debuts on the Top 50 Radar Chart at #43.  Just a few days later it is elevated to #37 and is included in the Top 10 "Spin Adds" list. Radio stations asking to be serviced with the title track of the album for inclusion to their playlist rotation. The Album is available on cdbaby.com (downloadable and physical copies), iTunes, and Amazon.com.

Lori King - "Still In Love"  Hits The Mark With Listeners of Smoothjazzz.com

Lori King is a Detroit native who delivers a powerhouse debut with STILL IN LOVE, lovingly brimming with soulful and romantic music to get you in the mood and keep you there! King, who has toured worldwide, now makes her mark on a recording, produced by Grammy Award winner Michael J. Powell, that perfectly blends soul, pop, R&B, and Contemporary Jazz. It took me only a few minutes to remember who King sounds like – the amazing Randy Crawford! But King puts her own touch to originals and classics, the latter including a joyous “Signed, Sealed, Delivered” and a slowed down, sexy-as-hell “I Want to Make It With You.” King pours her heart into her nuanced vocal delivery – just listen to the erotic and breathy beginning to “Unexpected.” King can be flirtatious, sure, but she also expresses a still-tender longing in the title track, “Still in Love,” an ode to couples who’ve stayed together through thick and thin. If you’re looking for some Quiet Storm of yore, you can’t go wrong with Lori King!

At a time when getting a deal with a major record label is slim to none, and mainstream radio is restricted to monotonous repetitive playlists, it’s refreshing to know there is a group of artists who are undaunted and fearless in their pursuit of musical expression. One such artist is singer Lori King who was honored with an award for Best Female R&B Artist 2012 at the First Annual Indie Music Channel Awards held recently at Hollywood’s House of Blues.

There’s sultry; and then there’s ultra-sultry – the latter befitting King’s persona as she took to the stage to showcase two songs from her new CD Still In Love (the title track which was also nominated for Best Song).

The audience was held captive like a lioness holding onto her prey as she sang with such prowess, conviction and believability, accentuated by her every sensual, curvaceous move. She’s the whole package inside and out. Released on Detroit Town Records, the CD is produced by 8-time Grammy Award winner Michael J. Powell – a remarkable musician best known for his work with Anita Baker. The 11-song set is chock-full of surprises including a fantastic cover of Stevie Wonder’s “Signed, Sealed, Delivered,” and Bread’s “Make It With You.” Interestingly, on the third track “Lovin’ You Lovin’ Me,” Powell seems to have mined a Quincy Jones’ production vein of a song he recorded on Aretha Franklin called “Master Of The Eyes” – a song I always thought deserved more exposure (kudos to Powell for going down that path whether intentionally or unintentionally).

King – a native Detroiter – continues a long line of great singers/musicians of that region, prompting the comment “It must be in the water” in reference to the Great Lakes. Listening to Still In Love, there’s no question Powell has tapped a wellspring that continues to spout great timeless music. From breathy bedroom nuances to powerhouse tones, King’s voice caused one intrigued fan to say, “…Lori King has a very interesting sound that draws you in.” Said King, “This is very exciting…Michael J. Powell produced this fabulous album and I’m just excited to get it into the hands of people all over the world.” Brian Spears who is Powell’s business partner handling licensing, publishing, and administration said, “Michael Powell who is President of Detroit Town Records [we call it D-Town] introduced me when they were recording the album and I fell in love with Lori’s music…Lori’s got a hit on her hands!”

The "Indie Music Channel" Awards held at "House of Blues / Hollywood" awards Lori King the honor of "Best Female R&B Artist 2012."  Lori King performs live at the House of Blues to cap off the night!

Lori King is honored to have been nominated in 2 catagories at the First Annual Indie Music Channel Awards: Best Female R&B Artist of the Year and Best Song of the Year for "Lovin' You Lovin' Me", a soulful, bluesy track from her debut album "Still In Love" produced by multi-Grammy Award winning producer Michael J Powell.

She will be performing for the awards on April 28th at Sunset Gower Movie Studios/ Hollywood as well as the Awards Ceremony itself at the famed House Of Blues, Los Angeles on April 29th.

Lori King's song "Lovin' You Lovin' Me" off of her album "Still In Love" is ranked #5 on the "Top 10 Most Requested Songs" list by 96.3fm WDVD/The Radio Cafe and MetroTimes publication. 96.3fm WDVD/The Radio Cafe and the MetroTimes... Top 10 Most Requested Songs Sponsored by: The METROTIMES Current rankings for the Week of April 5, 2010

The song "Lovin' You Lovin' Me" from the album "Still In Love" is added to the playlist rotation of the syndicated show "The Radio Cafe" of 96.3fm WDVD. Response is extremely positive. Station requests to arrange an on air interview with Lori King feature.
Back

AWESOME !! PACKED PERFORMANCE AT THE SUNSET GOWER MOVIE STUDIO WITH ALL OF ITS RICH HISTORY !!  GLAD TO NOW BE A PART OF IT ALL !!

THANKS SO MUCH FOR THE LOVE IN HOLLYWOOD !!  WHAT AN EXPERIENCE  !!

ON THE RIVERFRONT WITH SOME OF THE BEST DETROIT SUPPORT !!

WE CERTAINLY FELT THE LOVE ON THE RIVER !!  GOOD TIME-GOOD MUSIC-GOOD PEOPLE !!

Recording Artist LORI KING show at the historic site of Detroits Paradise Alley, where the history of music still comes alive right where it all began!

This Show Will Be Like No Other!  This is the Summer of Fun and it's only Just Begun!

Recording Artist LORI KING will be performing at Detroits famous Rib and Soul Fest in August of 2014 (actual date TBA).

Located in the heart of downtown, Hart Plaza on the River!  Don't Miss This Show!

Stay tuned to www.lorikingmusic.com for more bookings throughout the Summer of Fun

THANK YOU FOR ALL THE LOVE IN THE HOUSE !!!

THE GALLERY SUITE JAZZ SERIES IS SUCH AN AMAZING VENUE !!!