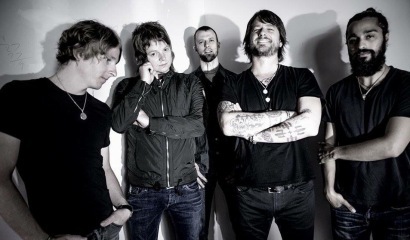 The group began writing and recording in Seattle as Lotus Crush in late 2009. In 2011 Lotus Crush released their debut album, Half-Light Morning, on Fontana. However, a year later McDermott began competing on the NBC reality singing competition The Voice, where he ultimately finished as the show's first male runner-up. Despite his solo success, McDermott decided to stick with Lotus Crush, and in 2015 the group returned to record it's sophomore album, Rabbit Hole, featuring the single "Hearts and Minds", which featured iconic actor C Thomas Howell as the villain in a dystopian near future.

Lotus Crush will release Rabbit Hole in both the UK and mainland Europe in late summer 2016 having already successfully toured throughout the continent. The band will also support the release of their “Live At The Columbia City Theatre” record in late 2016.

It's a place where giants have recorded some of their best music, everybody from Nirvana to Peter Frampton and Dave Grohl to Kenny G.

And now, north-east singer Terry McDermott and his fellow Lotus Crush members are soaking up the unique atmosphere at the Robert Lang Studio in Seattle, where they are in the process of creating a brand new album.

It's a project they never thought would happen after the Scot and his former colleagues went their separate ways.

But, ever since they started preparing for the new venture in Nashville, it's clear McDermott and the rest of the group - Peter Klett and John Luzzi on guitars and Scott Mercado on drums - are having a ball while laying down some stomping tracks, which should be released as an album early in 2015.

It's a different environment from that usually frequented by McDermott, who was one of the most glittering stars of the American TV show The Voice.

Yet, as he told STV, there is something exciting and energising about following in the footsteps of legends.

"We've had a fantastic time ever since we arrived at the studio and there's a real buzz about these new songs [which are being produced by Todd Burman]," McDermott said.

"We've laid down the single, which should come out in the autumn and we've already done two other tracks and everybody has been blown away by one in particular.

"This is a terrific place to record in; when you have a look at the artists who have worked here, it's inspiring.

"The Foo Fighters were in here a fortnight ago - we kicked them out, so that we could get in.

"And although I don't believe any of us imagined Lotus Crush would be back together again, considering how we all left to go off and do different things, opportunities such as this don't happen very often.

"The plan is to lay down seven tracks and really make them a memorable collection. We're well on schedule to do that."

McDermott has established a passionate following around the globe. His fans, the 'McHobbits' are dedicated both to his music and his engaging personality.

Wherever he travels, from the Big Apple to his native Pitmedden, or into the heart of Asia, his acolytes flock to his concerts in serious numbers.

And there aren't many musicians who would interrupt their recording session to pass on a good-luck message to one of their compatriots Colin Clyne, whose new album The Never Ending Pageant is officially released today.

"I've known Colin ever since I was in Driveblind and we struck up a friendship," said McDermott.

"We were both doing different things, but it was always great to meet up with him and chat about music and what was happening back home. We had a laugh about how we were these two Teuchters out in southern California.

"I hope he gets the success he deserves with this new record because he has put his heart and soul into his music."

These words apply equally to McDermott, who has never done anything by half measures.

His positivity is infectious, and he sounded genuinely excited about the quality of the new recordings.

"The track we laid down on Saturday sent shivers up my spine and the rest of the band felt the same," he said.

"Even the engineers were telling us how good it was and the atmosphere in the studio was electric by the end of the session.

"It's always satisfying when something like that comes together, especially for those of us who wrote the song [McDermott, Klett and Burman].

"Anyway, I better get back to the dungeon to record some more ... ."

It sounds as if this could be one production worth checking out when the single and album are unveiled.