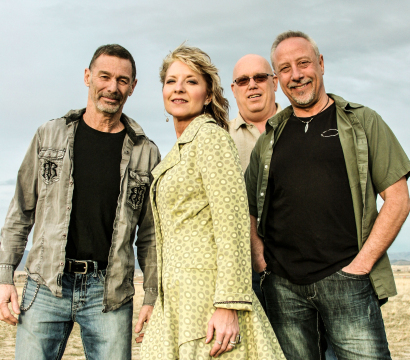 What do you get when you mix a hockey player, surfer, seasoned flightman and cougar hairdresser? Mabel’s Rage: a diverse fusion of blues and rock that will shake your foundation. Mabel (Gina Satterfield), the hairdresser, on vocals and the newest to the performing scene can hold her own in front of the well seasoned Bud Clarke (guitar), John Ross (bass) and Chris Brady (drums).
Fate and karma have brought them together after many years of venturing with others on the music scene throughout the U.S. and Canada, sharing the stage with the likes of, Big Brother and the Holding Company, Leon Russell, James Cotton, Guess Who, Jimmy Vaughn, Marshall Tucker, (Montana’s own) Mission Mountain Wood Band etc. etc.

WARNING! If you are to be a potential fan of Mabel’s Rage it is required to arrive at our shows prepared and be well equipped with straightjackets, rope and gaffers tape (no sticky residue) to restrain from out of control hand and foot tapping, dangerous dancing and grinning with infectious laughter.
Armed with original songs that keep you moving to their addictive beat and lyrics that provoke free thought and tell amazing stories, this band is a jewel. From the politically charged “America (You’ve Got Change)” to the neo-spiritually charged, “Mikey Says,” this band’s fresh, new material keeps you interested throughout. A precious gem that promoters will battle to claim discovery on. Along with their arsenal of originals, Mabel’s Rage play covers with their own zesty flavor that keep their audiences moving. With a catalog of over 60 songs, this band can play 4 full sets and comes completely self contained. Their lights and on screen graphics are a true compliment to their sound.
Their self-titled independent CD is a blend of hard driving blues and rock that is quickly gaining strong sales wherever they play as well as online. The production value is oozing with experience.

Their self-titled and independent CD is a blend of hard driving blues and rock that is quickly gaining strong sales wherever they play, as well as online. The production value is oozing with experience.
Audiences are captivated and mesmerized as the likes of Janis Joplin, AC/DC, and Fleetwood Mac are channeled through Gina's powerful voice sends the hair on their necks straight up (in a good way). No time for a trance though, as this high energy band moves into an original tune that might invite you to "to take a long trip on a short bus" or pay homage to "Sex On A Stick." So, lookout! There’s no predicting what this combo will do next. Their spin on Feel Good, Inc. by the Gorillaz is something that will etch itself in your mind. Just drop your party hat and put on your party pants and get ready for these adept artists to take the lid off the blender and serve you a very potent cocktail; Mabel's Rage!

Downtown ToNight happens every Thursday night in June, July, and August from 5:30 – 8:30 pm in Caras Park, Downtown Missoula. This event offers an outdoor venue for live music, Missoula's best food vendors, and the Bud Light beer and wine garden for residents and visitors. This event also highlights a weekly family activity and, as always, is FREE to attend!

Bring your family….bring your friends and join us for Thursday night fun in Downtown Missoula!

No pets allowed under pavilion during event due to health code regulations. Dogs can enjoy the grassy areas of the park on a leash!