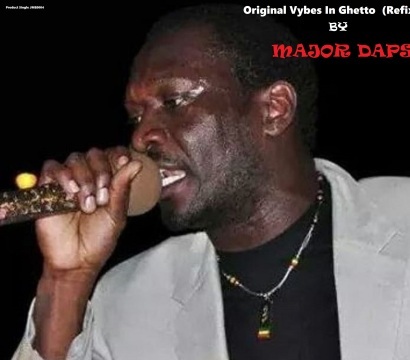 Major Daps (“It’s Time”) Once in a lifetime, one will experience a voice that can inspire the soul and touch the heart. A voice that seems to echo from the depths of humanity with the capability to uplift the spirits of many. Major Daps or “Daps” as many of his colleagues call him, was born on the beautiful and influential island of Jamaica. Major Daps uses his experiences from Jamaica as well as the love and wisdom of his Grandmother Irene, Mama Maudlyn, and the rest of his close knit family members to create a sense of passion, culture, and admiration within music. Love is no stranger to Major Daps. His ability to express the pain of heartbreak, the pleasure of companionship, and the anticipation of romance makes him an incredibly versatile artist. Listening to songs like “Part Time Lover”, Aroma” and “Once Twice” by Major Daps, will give everyone a little insight on his battle with love. His stage presence will captivate an audience,while his voice will draw each listener closer to his personal emotions. Major Daps has had the wonderful opportunity to work with and open up for artists like Lady Saw, Anthony B, Capleton, Shabba Ranks, Sizzla, Maxi Priest, Cocoa Tea, Terror Fabulous, and many others. Major Daps is determined to make music that will continue to be informative as well as entertaining. If someone would ask this artist where his music would be in the future he would reply, “Beyond the future,it will uplift the people and teach them the right things about life”. Major Daps has always used Reggae music as a tool and outlet to express his innermost thoughts and feelings. For this reason, he is known as an intimate artist, and songs like “Dem A Old Murderer”, and “Ghetto Vibes” will evoke tears, laughter, and love. Major Daps thanks his grandmother for the development of his voice, but he humbly gives credit for his lyrical inspiration to Emperor Haile Selassie I and the teachings of his Imperial Majesty. Major Daps is currently traveling the world, so that his resounding voice and musical genres of cleanliness, godliness and righteousness can be heard around the world…

Born in Clarendon, Jamaica, Major Daps is working on a synergy of the roots reggae music of the past with that of the present. In this CJ Spotlight, we talk to Major Daps about what makes his music and what his music means.

Talk about your music.

I do reggae music – positive reggae music to uplift the people. For the future is here right now, so we’re going beyond the future to teach the next generation – that’s how we roll.

Who are your inspirations?

Everybody that does positive work in the music field, from the heart, is my inspiration, really. But my main inspiration as a youth growing up was Lieutenant Stitchie, because of how he wrote lyrics and represented to other people. That would be my inspiration — to climb the ladder of success.

How would you describe your music?

I would say a positive vibration for everyone’s heart to feel, in a positive sense. Just to uplift everyone – culturally, in a mental way, and to be an inspiration. I would describe my music as message music.

How much is spirituality a part of your music?

You’ve lived in Jamaica and in the US. Does your music take on aspects of where you live?

Yes. From my upbringing coming up, whenever i would venture out of one area to the next, it’s an experience. So it brings a lot more to your knowledge, so you write from where you’re coming from, where you’re headed, where you’re going. That’s how it has to be – you write what you experience, what you believe, and what you know. So my music comes across through the powers of Rastafari, that’s how it rise.

What are you working on right now?

Currently working on another project to come out. I just finished It’s Time (H.I.M. Is Here Album) – it’s already on the road. Then we’re working on finishing the album.

Contact Information
Peace and Love To Whom It May Concern.
My name is Carlton Brown of Bold n Boasy Entertainment and Manager for recording reggae artiste Major Daps, with tracks like Play Jah Music, Warning Now, Your Pain feat. the late great Frankie Paul and more. Hope you're in good health, I'm here seeking gigs to promote Major Daps new album title, It's Time (H.I.M. Is Here) which is in digital distribution stores worldwide. So i'm asking if you are any promoter you may know looking to book a root reggae singer for your/their next event, please reach out to us.
Thanks for your time, nuff love and respect. If you have any questions, please don't hesitate to contact me. Looking forward to hearing back from you are your affiliate.
Tel: Mr. Brown - 1876-775-1921 / Mr. Egbert - 1203-465-9312
Email: management@jahmusic.info
Learn more about Major Daps here: https://jahmusicent.info/about.html