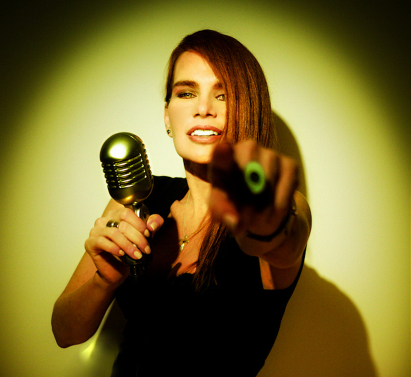 Known as one of the most versatile voices in Latin America and now North America, Maria Rivas skillfully combines American and Latin Jazz and Pop rhythms with lively yet sentimental music from around the world. She interprets her music in English, Spanish, Italian and Portuguese, and performs her own blend of traditional standards as well as music and lyrics she has composed herself.

Maria’s unique sound is an intoxicating combination of classic American Jazz / SCAT / Pop / Blues, with Latin Music and just the right splash of Brazilian accents, together with her signature mixture of indigenous, Caribbean, European, and African strains.

I consider Maria Rivas to be one of the finest singers on the world stage today, truly a tremendous talent. Her unique artistry fuses the diverse strands of Venezuelan ethnic rhythms; Afro-Caribbean beats; American jazz, rock and blues; Brazilian bossa nova, and Cuban boleros - just to name a few. Her music is varied, original, and unique. Oscar de Leon, Latin Grammy award winner

Many singers have wonderful voices, as does Ms. Rivas. The genius of her work is her skill in melding musical styles – jazz, pop, swing, Venezuelan standards and New Wave – into a unique whole that speaks to the broadest spectrum of listeners. Those who attend her concerts or hear her recordings are treated to familiar sounds impeccably presented, and they also have the opportunity to learn about and appreciate something new, often thru her own compositions … Just a few days before we saw her again, I’d said on the air that the only person who needed to sing “Lush Life,” as far as I was concerned, was Johnny Hartman; I felt I’d never heard anybody else do justice to the tune as he did. Well, last night I had to correct myself and say on air that she could sing it, too!! Tracy A. Fields, Host of Evenin’ Jazz, WLRN, Miami

She is truly an extraordinary artist. What she’s doing, above and beyond her Latin Pop career for which she is so well known throughout Latin America, is to meld America’s indigenous music, Jazz, to her own Hispanic musical genres. This is quite unique and her expertise leads to a new genre of Jazz and musical composition. Ed Bell, Producer/Host of South Florida Arts Beat, WLRN, Miami

Since my love is singing romantic ballads, I can tell you that Maria Rivas has a very special talent in this area. You have only to listen to her hit song, “Como Lo Haces Tú,” or to one of the other ballads such as “Hablaré Catalán” to recognize that in Maria we have one of the greatest vocalists on the world scene today. Ricardo Montaner, multiple awards winning and Latin Grammy nominated, top-selling ballad singer from Latin America

I have had the very great pleasure of working with Maria Rivas and find her to be an artist of rare and outstanding talent and sensibilities. Her spirit and her soul shine through in all that she does; her sense of melody is captivating and her lyrics speak to all that is closest to the heart. Jeremy Lubbock, multiple Grammy award winning and Oscar nominated composer, songwriter, arranger and producer

Venezuelan jazz troubadour Maria Rivas's tribute to coffee, Café Negrito, could easily be a featured item at Starbucks -- and not simply because java serves as the unifying lyrical theme for this collection of contemporary, classic, and traditional Latin songs. Even more to the point, this highly crafted world-beat fusion serves up Afro-Latin and indigenous Latin-American folk music by catering to European and Euro-American tastes as carefully as the coffee franchise domesticates its exotic beans. Depending on how smooth you like your multicultures brewed, this high-end production from Ashé Records will appeal to you.

Born in Caracas, Rivas came of professional age singing in the capital city's sophisticated jazz joints, such as Juan Sebastian Bar. Taking up the legacy of great U.S. jazz tunes about joe, from the jumpin' "Java Jive" to the love-weary "Black Coffee," Café Negrito is at its best when it's at its jazziest. The interpretation of Dizzy Gillespie's "Night in Tunisia," with impressive scatting and Spanish lyrics written by Rivas, proves that if Venezuelan musicians got into the jazz game late, they came in swinging. Other highlights include Francisco Morales's piano solo on the title track and Rivas's lounge styling on "Neblina de Tu Alma" ("Phantom of Your Soul"), both composed by the singer. "Motorizado II" ("Motorized"), also written by Rivas, is a pleasant jazzed-up salsa recounting the proclivity for caffeine among Caracas's motorcyclists, while her cover of the well-known "Moliendo Café" offers folkloric touches to a sophisticated arrangement in just the right proportion.  Celeste Fraser Delgado, Miami New Times

Maria’s unique blend of jazz styles not only includes Latin Jazz flavors of Venezuela and Brazil, but European and African styles and rhythms. Her fusion of international sounds brought into the American jazz culture so successfully makes her fresh and original, bringing a contribution to the jazz world which is both distinctive and matchless. Steven V. Moll, Vice Provost, Florida International University

Maria Rivas sings Latin Jazz and Tropical Pop. That is how she described her unique and innovative style to us when I heard her sing…to a studio audience at Ed Bell’s South Florida Arts Beat Program on Radio Station WLRN. I found her exotic and sensuous voice and her attractive stage presence captivating. Manny Meland, “Maria Rivas: A Venezuelan Bombshell,” miamiartzine.com

Contact Information
Maria Rivas is based in Miami Beach, Florida USA, and is available to perform throughout the world.

For additional samples of Maria's music, and more photos and videos, please visit: www.reverbnation.com/mariarivas
or contact us.
Information Request