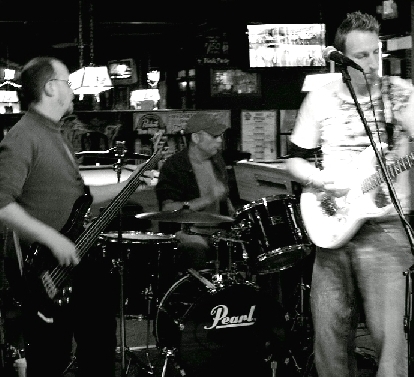 With a plethora of musical tastes and backgrounds ranging from classical to blues to country to metal and hardcore the band Matter of Circumstance shows no limitations with their writing ability and playing style. Starting in January 2012 with a solid three piece line up "Matter of Circumstance" has done nothing but try to break the mold on to today's music scene.

Band members are Forest Violette as Writer Lead Singer and Guitarist, Johnny Drums and Loren Haefer on Bass .... These three are true music professionals with each player having over 20 years of individual playing and performing experience with hundreds of shows each.

Their music is influenced by bands such as 3 Doors Down, Matchbox 20, Metallica, Seether, Third Eye Blind, Incubus, Creed as well as many other amazing musicians of the past and present, Matter of Circumstance mixes heavyrock and blues together seamlessly into a sound they call "melodic rock".

The vocals and writing style of lead singer Forest Violette brings a great sound to the songs they perform.  This band tries their hardest to be real to everyone they come in contact with and are geniuine great guys that have fun personally and in their professional music careers.

After playing a countless number of shows in the last two years, across Oregon and the Atlanta Georgia area they are ever growing and perfecting their sound and style as a prower rock treo.   They have just finished recording their debut full length Album in the spring if 2013 which will be released by the summer independently as a testament to all their hard work over the last two years. "This is everything we are and more." stated lead singer and writer Forest. "This is 20 years of writing and I have a lot more to come".

After the CD's release the band is planning on continuing to play shows for anyone and everyone into the New Year and years to come, while also searching for a label to possibly call home. They continue to write and perform as a power trio and band as they make a name for themselves.

Windy Hill and US41

With Forest, Loren and Johnny