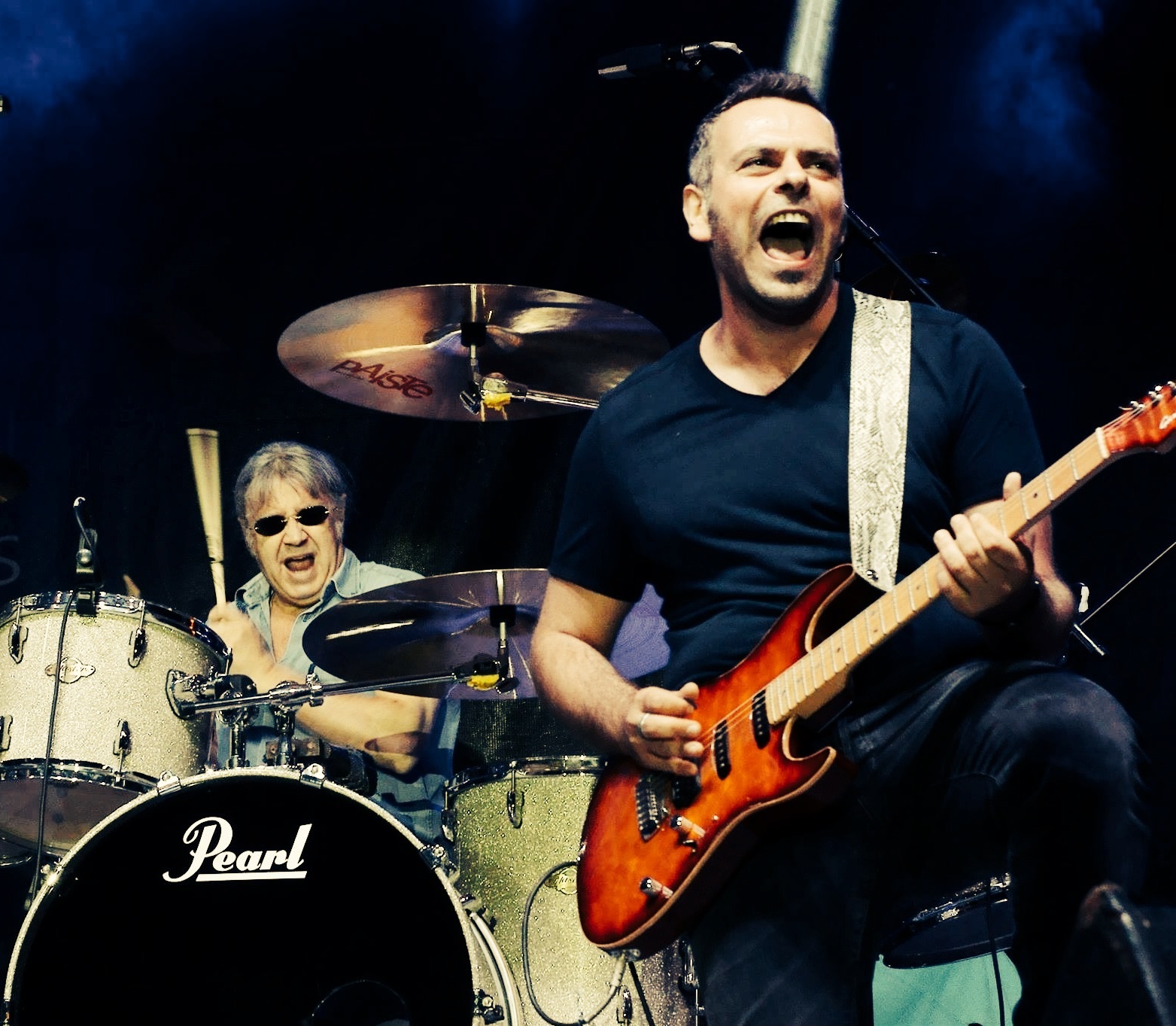 Matt Filippini is an italian guitar player, rock songwriter and producer. After working with some local bands, he started to take it seriously when in 2001 he started to play some gigs in Italy during a masterclass tour of the legendary drummer Ian Paice (Deep Purple founder and current member since 1968 but also with Paul McCartney, Gary Moore and Whitesnake). One year later, in 2003, after writing a bunch of rocking songs and recording a demo in his home studio, Matt gave a cd with the tracks to listen to to Mr. Paice who liked the stuff and agreed to record the drum tracks for the songs. So after Ian Paice recorded three of the tracks, Matt asked Glenn Hughes (Deep Purple, Black Sabbath, ...) to record vocals for two of the songs. Those became Rose In Hell and Where Do You Hide The Blues You've Got, two of the most appreciated songs from the first Matt's studio album, MOONSTONE PROJECT Time To Take A stand, released April 2006 on Majestic Rock Records in Europe and Japan. Besides Paice and Hughes (reunited on two songs after 30 years!), the album features other rock and roll gods like Carmine Appice, Steve Walsh of Kansas, Eric Bloom of Blue Oyster Cult, Graham Bonnet of Rainbow and many more!
The album, produced and written by Filippini himself, has been acclaimed by the music press with some great reviews and adored by thousands of classic rock fans from all over the World.
The album has been reissued two years later by Mausoleum Records with the title Hidden In Time. The reissue featured all the original record plus some bonus tracks including a live version of Bad Company's Can't Get Enough and a piano version of Where Do You Hide The Blues You've Got with an emotional vocal performance by Mr. Glenn Hughes.
From 2005 to 2008 Filippini played several gigs in Europe with his band and some very special guests like Ian Paice, Glenn Hughes, Bernie Marsden (Whitesnake) and Carmine Appice.
In 2009 Matt released the second and final chapter of his Moonstone Project, Rebel On the Run, co-produced by Alessandro Del Vecchio.
The album is more "band sounding" than the 1st one, having the same singer for 9 of the 10 songs, the vocalist James Christian of House of Lords, who did an amazing job on the tracks with his bluesy rock distinctive voice, just perfect for the Filippini hard bluesy rock!
Glenn Hughes features again on one song, Closer Than You Think, especially written by Glenn himself during a visit of Matt at Hughes' Los Angeles villa. Matt arranged a strings quartet for the first time in his life...the occasion being too special not to do it!
Other great musicians appearing are the legendary songwriter and multi-instrumentalist Ken Hensley of Uriah Heep, once again Ian Paice, drummer Clive Bunker of Jethro Tull and extraordinary singer Robin Beck doing some amazing backing vocals.
Once again the music press is really positive about this little classic rock gem, calling it a new classic of rock music. In June 2009 the album has been in the european top 10 rock chart just below Iron Maiden!

Other highlights of Matt's career are :

a jam session on stage with amazing USA rock giants Blue Oyster Cult, during their show in Milan in November 2008. Matt joined BOC to play with them a long version of their song Then Came Last Days Of May. See the video.
In 2009 Matt played several gigs in Europe with Ian Paice and Glenn Hughes. Also played a two weeks tour of Spain with guitarist Bernie Marsden of Whitesnake.
In 2010 Matt did a tour of Spain and italy with Carmine Appice.
In September 2010 Matt played a festival in Sardinia along with Roger Glover (Deep Purple), Bobby Kimball and Steve Lukather of Toto and Vinny Appice (Black Sabbath and Ronnie Dio).
In 2011, besides son gigs with Glenn Hughes, Matt joined Michael Schenker Group as rhythm guitar player for a private gig in Sardinia, Italy (see the video). In the same gig, Matt also played Deep Purple songs with a super band featuring Ian Paice and Don Airey of Deep Purple, Doogie White (Rainbow and Malmsteen) and Neil Murray (Whitesnake and brian May Band).
In 2012 Matt played several gigs with Hughes and Paice.
In May 2013 Matt did a tour of Spain and Italy with Glenn Hughes. In July he played a benefit show in Posada, Sardinia, with a super band formed by Matt on guitar, Kee Marcello of Europe on guitar and vocals, Roger Glover on bass and Ian Paice on drums. In September, once again in Sardinia, he joined another super band featuring Paice and Glover, Uli John Roth of Scorpions, the keyboards wizard Rick Wakeman of Yes and singer Doogie White for a burning show in front of thousands of fans.
Matt is currently writing new songs for an upcoming solo album. The songs are going to be in the classic rock vein Matt loves with just a little touch of blues, funk and some acoustic atmosphere. More details on the new album to be revealed soon!

Live shows in Italy with Ian Paice of Deep Purple

Matt Filippini Band will play two italian shows in May 2016. The dates are:

Tickets are available on www.eventbrite.it

On June 7th 2014 Matt played a memorable show with IAN PAICE of Deep Purple on drums in front of thousands of fans in Tirana, Albania.

The concert has been professionally filmed and it could be released on DVD in near future.

In concert with Bernie Marsden of Whitesnake

Contact Information
For booking and media please write to:

For all the other inquiries, please fill the form on the right.