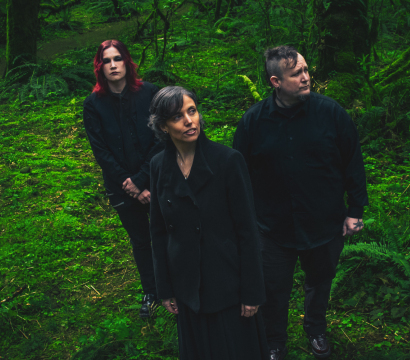 Mercury's Antennae was born in 2010 when Scheid met Allen in San Francisco. He approached her with the idea of collaborating on music and an enduring connection formed, as Allen gave voice to a number of previously recorded instrumentals. Other compositions came to life spontaneously as the two jammed with acoustic guitar and voice. They each brought their own unique approach to Mercury’s Antennae – Allen’s soaring, multilayer vocals fused with Scheid’s electronic experimentation and trusty guitars to create songs of rarefied style, power and grace. Coulter joined for the 2015 tour line-up, bringing an earthy, grounding element and fuller sound, officially turning the band into a trio.

Fans of darkwave, heavenly voices and spacious atmospheres have all found themselves at home with Mercury’s Antennae’s first full-length albums A Waking Ghost Inside and Beneath the Serene, both on Projekt. Between these two recordings, the band also released the digital-only EP The Guides, accompanied by the premiere of their first video for the track “The Guides v.2.”

2018 has been a busy year for Mercury’s Antennae, whose spring tour culminated with their European live debut at Wave-Gotik-Treffen in Leipzig, Germany. In conjunction with the performance, the band released the special EP Moon Viewing Garden on Sett Records and the video for the title track.

Mercury’s Antennae brings their alchemy of harmonic, swirling guitars, lush instrumentation, and dream-felt sirenic vocals regularly to the live stage with West Coast and Pacific Northwest touring. They are currently finishing up work on their third album Among the Black Trees (Sett) which they plan to support with a more extensive tour schedule in 2019.

Our new EP The Moon Viewing Garden is officially out today through Sett Records! 100 copies have been pressed for our WGT performance, after which it will remain available as a digital-only release.

We are thrilled to be part of this year's Wave-Gotik-Treffen festival! We play the beautiful Schauspielhaus theater Friday 18 May along with Raison d'être and Die Kammer in support of Einar Selvik.

The people behind the inimitable Lovecraft Bar in Portland have more on their mind than drinks--here is the latest installment of their compilation series, which includes the Mercury's Antennae track "Killing Time"... on vinyl even! (That's the big round thing.)

With Cindy Coulter (This Ascension, Faith & the Muse) our new bass player, Mercury's is now a trio! We have started working again on our new sonic work. We are in the recording phase and excited to see what inspiration comes.

And now for something from the spacier side of Mercury's Antennae--head on over to the Projekt Record's Bandcamp to stream Hues of Infinity for free! https://projektrecords.bandcamp.com/album/the-hues-of-infinity-free

If you like CDs still (those round things), a limited-edition release is available from Projekt's site: http://www.projekt.com/store/product/arc00134/

We're happy to announce our new EP The Guides is available from Projekt's Bandcamp page. You can stream for free here.

Our debut release! Thanks to Projekt Records for this beautifuil limited edition CD: http://www.projekt.com/store/product/pro00291/

The Box @the Blue Lagoon

Brickbat Mansion @The Steep and Thorny Way to Heaven

The Box @ The Blue Lagoon

Tickets at the door or through Ticketfly

Tickets at the door

The steep and thorny way to heaven: SE 2nd & Hawthorne, Portland OR

Contact Information
Thanks for checking us out! For more music, please visit our main site and Bandcamp and SoundCloud pages: