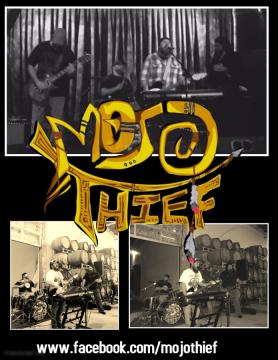 Mojo Thief was formed in a smoky haze sometime in 2015. 4 friends of more than 20 years decided to break out of the formidable cover band rut and start bringing their many original songs to light.
Brian Sanders with his Soulful Voice and vast music knowledge is the key songwriter and lead vocals. He not only uses his voice as an instrument, he excels in his guitar playing and gives Mojo Thief their patented sound with his keyboard and organ playing. Brian has been playing in the OKC Music Scene for over 30 years and toured the country with different bands throughout his career.
Marty Simon is Mojo Thief’s second guitar. He not only holds down the rhythms but gives the band the needed ambiance to complete the magic of every song. Marty isn’t just your normal rhythm guitar player, he himself can hang with the best of players on all lead breaks. Marty also has been in the OKC Music Scene for nearly 20 years and has a range of influences from Punk Rock to Blues and Soul.
Paige Vernon hails from the mighty New Orleans, Louisiana. He brings the Voodoo to Mojo Thief’s Voodoo Blues. Paige’s Bass Playing brings the Funk and Rides the pocket in just the right way to get your feet moving and your body shaking. Paige comes from many bands and was most known for Ugly Stick who was signed to Pavement Records.
Kris “Buck Wild” Buchanan is the Heart Beat of the band. Buck has been playing drums in the OKC Music Scene for a very long time. Buck’s background is in punk & grunge but knows how to soften it up to create the right mood for every song.

We just got the first round of mixes for the new E.P. We Recorded back in May. 6 new Mojo songs for your listening Pleasure.

I’ve heard it said that when you quit smoking food is supposed to taste better and you’re supposed to be able to smell things better. Maybe I’ll find out if that’s true someday. I often wondered if the same was true about music and drinking.

Being a teetotaler now do I hear music in a different way than I did when I was balls to the wall out of my mind at a show or just listening to music at home? Was it that much better when I was loaded? It’s hard to say but I’d like to think that good music can sort of overcome a state of mind and sound good no matter what.

The Oklahoma City psychedelic rock quartet Mojo Thief play a boozy sort of back room bar rock that I cut my teeth on and continued to find myself surrounded by for so many years after. It’s just the nature of the beast, the nature of the Midwest. There are certain kinds of bands you only find in middle America as there are other kinds of bands that you find on either coast, in the denizens of New York and Los Angeles.

The latter two to me have always seemed more stylized, having essentially less to do with the music than the image. The problem with that is is that after time image fades, it changes, and if the music isn’t worth a damn then the legacy turns to dust and is gone.

I think Mojo Thief know this and by nature refuse to become artifacts of movement past. On their self-titled EP Mojo Thief, they take that sort of blistering psych rock of the ‘70s and add some soulful grooves and singer Brian Sanders’ vocals, which reminded me at times a little of Jeff Buckley, that really help to mellow out the harder tinges of rock these songs sometimes jaggedly escape to, as he does so nicely on the album’s opener “Disco Eagles” and later on the glam meets reggae meets prog-rock of the gorgeous and melodic “19 & Failing.”

​The song shows the tightness and control of fellow band members, guitarist Marty Simon Guitar, bassist Paige Vernon and Kris Buck Buchanan on the drums. And when these guys come to play rock n’ roll, as they do so nicely on the rich and raucous “Down the Line” one comes to understand and marvel in the beauty and richness of classic rock n’ roll that Mojo Thief plays so well.

With a genre bending church organ start, Mojo Thief’s, new EP leads with Disco Eagles, quickly adds a strong bass line and Steely-Dan-esque guitar to bring you back. Very enjoyable mix of hard and soft rock elements. Thou Shalt Not pushes a heavy sound that brought me back to Queensrÿche's 1999 Q2K. My favorite track, 19 and Failing, takes you on a ride with a Steely start and lovely melody that I can listen to over and over again. Down the Line slowly head-bangs onto stage with a heavy sound and ballad feel. Rock and Roll, indeed. Closing with the rapid-fire Shadrach, Meshach, and Abednego, you're left toe-tapping to the old school rock and roll. Blue Öyster Cult influence, perhaps? With this release, Mojo Thief brings an all-hits contender. Every track is golden

Our New E.P. had FINALLY Dropped today. You can review it digitally on our bandcamp page. Hard Copies and a Release party will be announced soon.

EP Is finaly in Mastering. Should be completed First of Next Month. Then we will be putting together the CD Release Party.

I wanted to send everyone a very Happy New Years and and Thank You for a Great 2017!
We played over 30 Shows, 7 Festivals, and Multiple Fundraisers and Benefits.
We finised a 5 song E.P. That will be coming out the first of 2018.
So Raise Your Glasses and Lets Bring in 2018 with a bang. Slainte'

We are excited to announce we have been asked to play with some of Oklahoma's Finest Local bands at the Totally Local Fest. 2 days and 2 stages and over 40 bands. Hop to see yo there

Final Mixes have been received. We have uploaded one for you to hear on this page. Now off to Mastering and our first E.P. will be done

The New E.P. is now in the Mixing Stages. It will include 5 of our Orignial Songs. Keep checking back for a Release Date and CD Release Show.

Mojo Thief will start working on thier debut album on May 7th at Breathing Rhythm Studios in Norman, Ok.

This is a 3 day event a the Fur Shop in Tulsa, Ok.

With Chris Welch and the Cicada Killers

We will be Rocking the State Fair Bandshell stage from 6:30 to 8:00

Live Music on the Canal

We are rocking the Full Band Stage at 9:30. Stage is located by Earl's Rib Palace on the Bricktown Canal. All Ages Event

We will be playing with Everfade and Harold the Bear

$7 Cover comes with a free beer

We will be rocking The Root in OKC with Special Guests The Plums. $5 Cover at the door

45 bands on 2 Stages in two days. All ages Show. Donations accepted at the door. We Play Friday Dec. 8th at 8:30 pm on the inside stage.

Norman, Ok. with Harry Bear and the Sking Rugs

Playing with The Stinky Gringos, The Dischord, and Shark Suit

Playing with The Indigos

It’s a Mojo Party! The New CD is out and will be available and it’s Bucks Birthday!
We are bringing our Good Friends in Mandy Brixey & The Southern Charcuterie and The Hillbilly Handgrenades with us.

The New EP is Ready and we are ready for you to have it!

Come to Belle Isle and get you a copy!
$7 Cover at the door gets you live music and a Free Beer. Maybe a chance to win a copy of the EP!
We are bringing our good friends in Harold Bear & The Skin Rugs to jam with us!
You don’t want to miss this amazing night!

The State Fair of Oklahoma

We are opening for Chris Welch and the Cicada Killers at the Red Brick Bar in Norman, Ok.