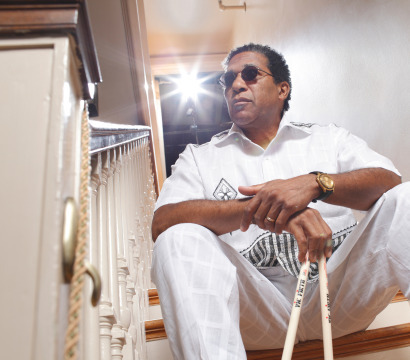 (Drummer) is the founder, leader and driving force of his band SUPERNOVA®. Though a bandleader for many years he has also built a solid reputation as a sideman with several groups from his home base in Washington, DC; and he has performed and/or recorded with many artists throughout his career. Inspired by Tony Williams, Max Roach, Roy Haynes, Elvin Jones and his cousin Frankie Dunlop (Thelonious Monk), he creates jazz music steeped in hard bop, modal, fusion, and avant-garde styles. Nasar attended University of Buffalo, in NY; Howard University, and the University of the District of Columbia in Washington, DC. Most recently SUPERNOVA® was selected by the US State Department and the Lincoln Center as Ambassadors to tour with the American Music Abroad Rhythm Road. This one month tour took them to five (5) countries in East Africa; Rwanda, Uganda, Ethiopia, Zambia, and Mozambique. He is Professor of Jazz Percussion at the Peabody Institute of The Johns Hopkins University in Baltimore, MD; teaches privately, and is a clinician as well. His debut CD, Mirage was released on the Amosaya Record Label and a follow-up CD, Diamond In The Rough, was released on the DPC Music label in 2011. Abadey has performed with Sonny Fortune, Pharoah Sanders, Gary Bartz, Andrew White, Dizzy Gillespie, Hank Jones, Bobby Hutcherson, Ella Fitzgerald, Sun Ra, Russell Malone, Malachi Thompson, and many other jazz greats. He has also appeared in various festivals in the USA and abroad.

Joe Ford
(Saxophonist) composer and arranger, is a passionate musician who began playing in elementary school in Buffalo, New York. His melodious humorous, insightful style reflects the broad spectrum of the American experience, and ranges from spirituals and rural blues to contemporary music and avant-garde jazz. Ford is classically trained and his influences include Sidney Bechet, John Coltrane, Jackie McLean, Wayne Shorter, and Sonny Rollins. He has worked with Frank Foster, McCoy Tyner, Kenny Kirkland and the Fort Apache Band, to name a few. His original post bop and modal tunes can be found on his album “Today’s Nights.” Ford received his Bachelor of Science in Music Education at Central State University, Wilberforce, Ohio.

James King
(Bassist) and composer, was born in Houston, Texas. James studied at Texas Southern University, Hampton University, and the University of the District of Colombia. He is a well-known bassist in the mid-Atlantic region, and performs in concerts and festival throughout the world. Mr. King has lived and worked in and around the Washington, D.C. area since 1977 and currently is a member of the Smithsonian Jazz Masterworks Orchestra. He has performed with Elvin Jones, Sonny Fortune, Stanley Turrentine, Gary Bartz, Marlena Shaw, Frank Morgan, Mulgrew Miller and Milt Jackson, just to name a few. King is a very gifted composer with a lyrical bass style. His debut CD is entitled “Allen’s Odyssey” and was released in 2009.

Allyn Johnson
(Pianist) composer, and arranger, born in Washington, and is currently the Director of Jazz Studies and the UDC Jazz Band, for his alma mater, the University of the District of Columbia. He has worked with Andrew White, Frank Morgan, Sonny Fortune, Fat Head Newman, Bennie Golson, and Stanley Turrentine among others. His debut recording “Premonition” with the trio Three for All”, is a perfect environment to showcase his compositions. Mr. Johnson has also arranged, composed, and recorded “Divine Order” and “Grace Transforming Journey” with his band Divine Order. His style is lyrical, fiery and bright. He is a very talented and gifted pianist.

Josh Evans
(Trumpeter) born and raised in Hartford, CT, was drawn to the trumpet after hearing a Roy Eldridge and Dizzy Gillespie recording at the age of 10. Josh began studying with Raymond ‘Dr. Rackle Williams and within a year he began performing regularly with Dr. Rackle’s Sound Griot Brass Band. By the age of 14 Evans’ musical career began to take shape when he started to study with and be mentored by the celebrated alto saxophonist/composer, and educator Jackie McLean. Studying under McLean who shared the bandstand with Miles Davis, Charlie Parker, and Art Blakey, would be pivotal in Josh's career. The experience would blaze the path for performances with Jackie McLean which included New York based venues such as the Blue Note, Iridium, and the Regatta Bar, (located in Boston, MA), and the Bushnell Center for Performing Arts in Hartford, CT. Josh has worked and recorded with Jackie McLean, Benny Golson, Rashid Ali, Ralph Peterson, Winard Harper, and Frank Lacey, to name a few. He leads, composes, and arranges for his Josh Evans Sextet and Josh Evans Big Band.

Olayimika Cole and The Play of L’Ife

The Side Door Jazz Club in Old Lyme, CT

This event is part of the sixth annual Coca-Cola Generations in Jazz Festival, a multi-generational meeting of legendary masters and emerging artists.

An Interview and Two (2) Set Concert

In a Tribute Concert

To honor the memory, and present to those whose lives were, and continue to be, touched by Ron & Ronnie Elliston, an evening of music that showcases the lasting contributions to the Jazz idiom.

Celebrating the history and heritage of D.C. Jazz as practiced at Westminster Church.

Charles Covington, Jr. is recognized as a virtuoso jazz pianist and jazz organist.

Appearing with the Dragon Quartet

Tribute to trumpeter Freddie Hubbard, Featuring: the Trumpet summit of

JAZZ LIVES! A musical ourney from the Africa migration to present day music.

A Tribute and Celebration of Jazz Appreciation Month

for Reservations and information

“Audrey Shakir is one of the greatest bebop singers in the world today,

a talent with a thrilling voice, sure to send elation through the audience.”

SUPERNOVA® performs music from the threshold of Jazz to beyond space and time in "Multi-D", multi-dimensional and multi-directional, while having an artistic license to express their original compositions through traditional African rhythms, bebop, fusion, Afro-Cuban, Afro Brazilian, free form, etc. The band continues to record, perform, and present workshops and master classes.

Drummer Nasar Abadey leads this progressive jazz ensemble in trenchant explorations of his, and band member's original compositions. The music is rooted in the bop tradition, but inflected with a connection to the many great musicians who came before from the African Diaspora. On drums, Abadey prods and pushes with a contemporary sense of groove and swing. SUPERNOVA® will restore your faith in humanity.

"Drawing influences from powerhouse drummers such as Tony Williams, Roy Haynes, and Jack DeJohnette, Abadey knows how to swing hard, but not in a manner that's bombastic and obtrusive. Instead, he builds tension behind billowing solos"...John Murph, Jazz Times Magazine.