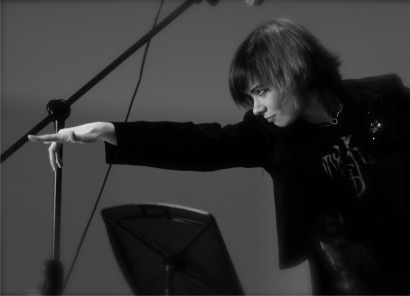 A wild, multi-coloured supercell of psychedelic industrial music combined with house, neoclassical, and alt-rock influences, with the occasional respite-waves of trip-hop here and there.  Natalya Wren is self-taught in some respects and classically-trained in others, and now's the time for her to share her brain-musings with the world.  Whether or not that's sane or logical is up to the imagination, but who cares about rationality?  We're all mad here.

Born in Kansas City in 1987, Natalya got her start at about age 3, when she started teaching herself to play piano, and she's been making up music for as long as she can remember.  At the age of 7, she started learning violin, and along with piano, she's been playing ever since.  Throughout high school and college, she was very active in choral music, singing with the top choirs in each, and was the sole recipient of the Shawnee Mission North Choral Music Scholarship for the class of 2006.  She has appeared in university opera productions such as Suor Angelica, Hänsel und Gretel, and Dido and Aeneas.  She now holds a B.M. in Music Composition from UMKC, where she studied with composers such as Chen Yi, Zhou Long, and Paul Rudy.

Natalya is actively involved in both the classical and non-classical worlds.  She has played The Bottleneck in Lawrence, KS as well as the Riot Room and Davey's Uptown in Kansas City [under the name Black Tie Laceration], opening for bands such as Angelspit and Math the Band.  In addition to making electronic music, she plays piano at Spirit of Hope MCC in Westport, and she is a member of Kansas City's Te Deum Chamber Choir, Schola Cantorum at the Cathedral of the Immaculate Conception, and the women's ensemble Siren Song [currently on hiatus].  She is also currently a vocalist and violinist in the up-and-coming group Soultown Redemption, where she sings and plays Motown covers.  When not making music actively, Natalya enjoys painting, drawing, studying foreign languages, and making jewellery.

All in all, Natalya lives for her greatest passion - creating music - and she doesn't see that stopping anytime soon. :)

Opened for Angelspit, MyParasites, and Cyanotic [as Black Tie Laceration]

Opened for AZP at The Riot Room in Kansas City

Contact Information
For booking requests, questions, or anything else, you can reach Natalya via email at kiisu.katt[AT]gmail.com.
Information Request