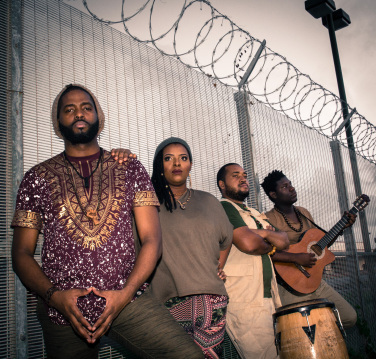 After One Chapter is the Nex Chapta

Fashioned by consciousness, Nex Chapta is rooted in the twin-island country of Trinidad and Tobago and born of the connection between husband and wife duo John G and Jackii G (vocals), brother Kwami Morrison (guitar) and friend Mikhel Carter (percussion). Inspired by the grassroots music of Bob Marley, these four souls deliver a full-blooded sound through their performances infused with Caribbean guitar and African drum patterns. Their name “Nex Chapta” symbolizes progressive change. Their style – Soul on Roots Reggae. Their message love, awareness and the active pursuit of good vibrations.

Their journey began in 2016 to create positive music and move hearts and souls through a message of love and awareness. Since then, these kindred spirits have birthed singles like “Good Morning Rasta”, "Zion" and "Living the Dream". Their first single “Good Morning Rasta” was well received by local and online radio and featured for 13 weeks on the Foundation Radio Network’s Top 30 Music Chart and South Florida Top 25 Reggae Chart.

Gaining traction in 2017 the band opened for reggae/dancehall legends Beenie Man and Bounty Killer at the Guinness Fully Loaded Concert. Nex Chapta went on to perform at the welcome party for the young reggae icon Chronixx who headlined the One Heart Caribbean Concert in Trinidad.

2018 was an amazing year for the band. Described as “deeply moving” and “spreading a vibe that seems to bless the stage” they showcased music in front of Caribbean folk and jazz fans at the New Fire Festival and I am Jazz Festival. They also opened for reggae/dancehall headliners Tanya Stephens and Tarrus Riley at the world famous Tobago Jazz Experience delivering a live performance that elevated consciousness.

Nex Chapta seeks to establish in 2019, a foundation for themselves as lyricists for conscious action. The next step in their musical pilgrimage is to complete a debut EP featuring a collection of songs on the human condition. The EP will be done in Nex Chapta’s unique and rootsy style and showcase a spirit of Reggae that can only originate from the cultural melting pot that is Trinidad and Tobago.