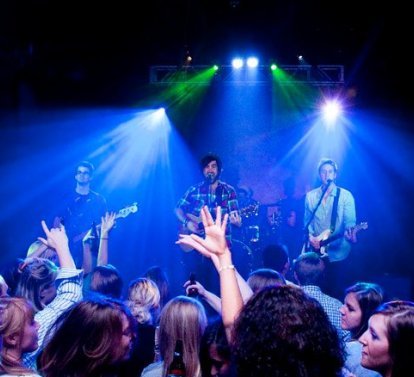 The Nick Rallis Band -NRB Ask them and they’ll tell you that they’re “a couple Midwestern boys trying to create music as an outlet to fill the space where talking cannot. Nothing more, nothing less. BUT, if we accomplish more, well then that’s just icing on the cake“

Putting a label on the Nick Rallis Band is not an easy thing to do. Some might call it rock, some might say pop, some might say reggae, and others may say singer songwriter folk. The truth is that all four members of the band come from different backgrounds and have different influences…consequently the resulting sound is something pleasantly irregular, but very very organic. And that’s something they take pride in.

Hailing from the small (in populous) state of South Dakota these fellas have been surrounded by an opportunity to tell stories from a small town perspective with a universal feel. Nick admits “truth & honesty are the only things I really care to write about. If you can’t believe what I have to say, then how should I expect anyone to listen?”

Comprised of Nick Rallis (Vocals & Guitar), Paul Tims (Lead Guitar), Ross Wheeler (Bass) and Trevor Ferguson (Drums) these four guys have recently wrapped up their first album in this four piece setup. Beginning early this next year, keep an eye/ear out for some ‘B-side’ releases.

Be our Record Label...We're starting a campaign to kick off our new CD and we NEED your help! Much thanks, NRB

We have been working very diligently this last few months trying to get our first 4 peice band album into your ears. We added a few new members to the band recently and are real excited about it! Trevor Ferguson (drums) and Ross Wheeler (Bass) have become a permanent part of the band and bring a fresh dynamic and sound to the band. Check us out on our Facebook page in the weeks ahead for songs from our "B-side" recordings. (songs that didnt make the album). We will be releasing a new song each week until the new album drops. Hope you enjoy them! www.facebook.com/nickrallisband Stay tuned for more updates and thanks so much for sticking with us! All the Best, -NRB

We are now on Itunes! U can download our mp3's or buy the New Album from the Itunes store. You can also check us out on CD Baby: http://www.cdbaby.com/cd/nrallisband

We have been back home for the past few weeks working on some new material for our next album. Its been a blast playing shows around our home town and hanging in good ol' South Dakota before we take off for our spring/summer touring. The snow is finally melted and the sun is shining! Cant complain... Stay up with us as we are finishing the new music. Looking forward to getting it out to you! All the Best! -NRB

Heading back to Denver

We are hitting the road again this weekend for a show at Rex Lounge in Denver, CO Friday night. Fun Fact of the day: "At 14,110 feet above sea level over 400,000 people ascend Pikes Peak each year." Hope you're ready for 3 more! See you in Denver. -NRB

We're in Park City, UT this wk for the festival. Gonna be around till Thurs January 28th

Home for the Holidays

We just got off our West Coast tour which brought us thru Denver, Vegas, LA, Santa Monica, San Diego, Tuscan, Austin and Oklahoma City and will be playing local shows up until after the new year. We had a great tour and met a lot of great faces along the way. It because of those people that make touring all the more rewarding! We have also been capturing a lot of what goes on on the road on our FLIP camera, so we will be posting clips of the shenanigans very soon. For a side note: Lets just say Ryan came home with a lasting memory. Keep your eye out for the video! -NRB

We got our 6 song EP back a few weeks ago and are pumped to get it out on the road and into your hands! BUT, we decided to add 2 more songs to it to make it more of a full disc and so you have more songs to listen too! They are already done, so we are just waiting for it to get back from mastering and production and it will be good to go! It will be ready for release Jan 10' All the best, NRB

Hey Hey! We have been patiently waiting for our first 6 song EP to release and it will be done by the end of November! For now, check out some of our live tracks on our fan sites to get a small taste of what's to come! We are also working on new songs at the moment and are eager to begin laying them down! MySpace www.myspace.com/nickrallis Facebook www.facebook.com/nickrallisband Website www.nickrallisband.com
Back