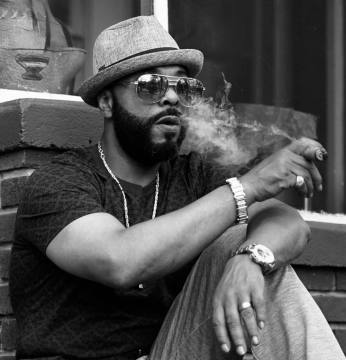 THE BIOGRAPHY OF HARRY D. HUNTER A.K.A OG SWEETZ
Born in Madison, Georgia, Harry D. Hunter had a natural born affinity for “running his mouth” even before he could crawl, says his mother. The grandson of a Baptist Minister, Hunter was raised in a family with strong spiritual values.
Hunter’s musical career began while he was still a high school student. He moved to Columbus, Ohio with his mother, where he first became involved with the music industry. He called himself the rap artist “Sweet Daddy” at age 15.
In his freshman year of high school, Hunter returned to Madison but ultimately went back to Ohio to resume his career, doing radio spots for advertisers and performing on local television as an upcoming rap artist.
When he moved back to Georgia, he enjoyed continued success as a rap artist in Atlanta. He signed with a local record label in 1996.
Although Hunter was well known in the Southeast, he wanted to perform more positive music. He was unshakable. He felt so strongly that he asked his record label to release him.
Released from his record label, Hunter was on his own. He established his own record label – Bless Records.
Hunter recently founded HDH Entertainment which combines his love of music and video. It will both educate and entertain while uplifting the community. The goal is to inspire the youth, connect with those who love “Old School,” and show love to the O.Gs.
Hunter has participated in television and acting projects. He was featured in the movies – “The Last Punch,” “The Killing Secret,” “The Turn Around,””Honor Among Thugs,” “Last Call,” and “Reign of the Scorpion.” Hunter was a supporting cast member in the movie, “Closet Space.”
Hunter was featured in the television series, “Compromising Positions” and lead for the MSQ commercial.
Hunter has over 30 years experience in music with a love of writing and creative expression. He is a husband, father, business owner and caregiver to his 80 year old grandmother.
His hobbies include spending time with friends and family, golfing and fishing.
Hunter’s interest include: business ownership, fatherhood and uplifting the community.

Quotes from Hunter
“My music is an expression of how to solve the problems we see in the media and society through story telling.”
“How can we become the positive change that needs to happen?”
“How can I best make a difference?”
“Let’s leave legacy for our children and our children’s children.”