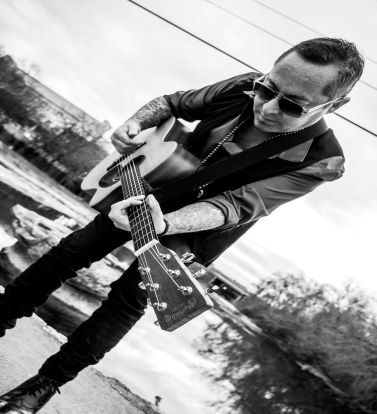 Amidst the 2020 quarantine, Austin, TX based singer/songwriter Omarr Awake emerges with a new single "Who We Are". This driving tune addresses social and economic differences but ends with the refrain "Yeah We'll Make It. We'll Make It Through."

Who We Are is the follow up to 2018's Traveling Man Blues and it marks the 8th release from Omarr Awake.

The band consists of:

New song "Maybe" to be featured as Song of the Day on KUTX and KUTX.org!

We're honored to have our new song, "Maybe", featured as Song of the Day on Austin's KUTX. You can also catch the podcast on KUTX.org! Big thanks to them for the support

Our new song, Maybe, comes out on Fri Oct 16th and will be available on Spotify, iTunes, Amazon, and all streaming platforms. We'll also be performing at WTF Icehouse to celebrate the release!

New single "Throttle From the Bottle" and music video drops on July 24th!

Who we are on Austin City Limits Radio

ACL Radio will be spinning our new single on their Lone Star State of Mind Program this Sunday May 24th at 8:00pm! 97.1FM in Austin or at www.acl-radio.com!

New song Who We Are available now!

Our new tune "Who We Are" is now available on iTunes, Amazon, Google Music, Spotify, and all major streaming platforms.

"Who We Are" music video now available on YouTube as well!

We're also the featured Song of the Day on https://kutx.org/category/song-of-the-day. Check it out!

KUTX Song of the Day

KUTX was kind enough to feature us as their Song of the Day. Visit https://kutx.org/song-of-the-day/omarr-awake-who-we-are to check out the post, the song, and the music video

New Photos on the Photos page!

New pics posted of the full band by Mimibug Photography

Tune in. Rock out. Thank you!

Tune into https://bbsradio.com/ for the best in indie music! Omarr Awake is now a featured artsist and will have his songs live on the air 4-5 times a day.

Here is a link to the spotlight page:

2 new songs will be released on May 4th, Travelin' Man Blues, an Being Yourself (Don't Mean You're Alone). Available on:

New Single out May 4th!

Austin, April 23, 2018 - Friday May 4th marks the unveiling of “Travelin’ Man Blues,” Omarr Awake’s first new music since the 2013 EP “Time Spent In The Machine.” The song is a departure from Awake’s previously late-night, dulcet sounds to a more driving, Americana-infused feel. The song comes on the heels of a 3 month long, 24-city national tour in the fall and winter of 2017, during which Omarr performed solo in venues from South Florida to Northern-most Washington State.

Written alone in a small Hyundai, this new song is the reflection of much time spent thinking, discovering, writing, and creating. “I spent 3 months basically alone driving, and reflecting on my life, past, present, and future. Hours, and hours spent by yourself becomes almost meditative. I wanted to convey as much of that into the song; everything I’ve poured into my music over the last 25 years, everything I’ve given up, those that have left my life as a result of my choices. It can hurt, but in the end, this is what I do. I wouldn’t change a thing.”

“Travelin’ Man Blues” is also the first time much of the instrumentation was done remotely. Initial tracks by Omarr, percussionist Joe Devadanam, and keyboardist Tyler Autry were done at Monument Sound House in Austin, while drummer Nick Amoroso’s performance was recorded by Andrew Dickson at Studio D in Nashville. Bass and Lead Guitar were recorded in Austin by Mario Castellanos at Modio Studios, and by Chris Mosely at his home studio, respectively. Mark Ford provided cello from Everdrift Studios in Tallahassee, FL. Mixing and mastering were done by Dustin Morrison at Greentown Studio, Royce City, TX.

The result is surprisingly cohesive, despite the fact that the song was never rehearsed. In fact, some of the participants have yet to meet. The feel and collective delivery is seamless, and the passion, and energy is undeniable. The musicians are all top notch, and it shines through brightly.

This new single follows 6 independent releases, with “Being Yourself (Don’t Mean You’re Alone)” as its b-side. This will be Omarr Awake’s first digital-only release, and artwork was once again done by artist/songwriter/producer Brandon Callies. The songs will be available for download on iTunes, Amazon, Spotify, and everywhere else online music is sold.

Pre-production has also begun on a new EP scheduled for release in Fall 2018.

You can now stream Omarr Awake, as well as his previous project Slow Car Crash, on Spotify! Check it out!

Time Spent in the Machine now available for online purchase/download

Time Spent in the Machine is now available for online purchase or download at https://store.cdbaby.com/cd/omarrawake or on iTunes, Amazon, and more!

Omarr Awake will be performing in Philadelphia at Ortlieb's Lounge with Rann on 10/28, and in Teaneck, NJ at Mexicali Live hosted by Jimmy Gnecco on 10/29! Check the Shows page for all upcoming dates!!

New shirts will be available at all upcoming shows. Limited edition so get yours!

Click on the shows section for new dates including Lafayette, Nashville, Knoxville, and more!

Preproduction of Music Video for In Control Of Just One Soul Begins!

Omarr Awake will be performing throughout Texas, Louisiana, and Tennessee, and beyond this Fall 2016. Dates TBA!

Under The Hill Saloon

Under The Hill Saloon

Come and Take It Live

w/City on Down and more!

Come and Take It Live

The Far Out Lounge

Join us to celebrate the release of our new single "Maybe" Fri Oct 16th at WTF Icehouse. We'll be on 6:30 - 8:30 and the show is outdoors and socially distanced. Also on the bill are Tarry and the Towns