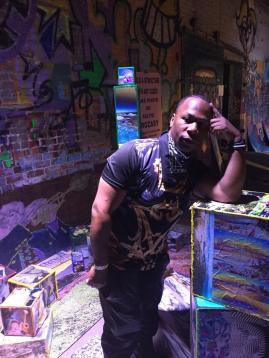 PB HASSAN made the move from Camden, New Jersey, to Los Angeles, California, to pursue his career as a hip hop and R&B artist. The musical mastermind has collaborated with megastar industry artists and producers, including Dr. Dre, Domino, AMG, Howie Tee, and Shaunta. PB HASSAN has been featured on soundtracks such as House Party 3, Half Past Dead, and Deuce Biggalo Male Giggalo. He’s toured and worked his way through the business of music with established artist like the "Notorius B.I.G.,ZHANE, and performed in plays with actress Regina King, and now, he’s working toward becoming a renaissance man in his niche. Fans can learn more by following @pb_hassan_ on Instagram and pb.hassan1 on Facebook. His music is available on Soundcloud and Reverbnation.

Half Past Dead/ Soundtrack

We Run The Underground

For more information about this artist