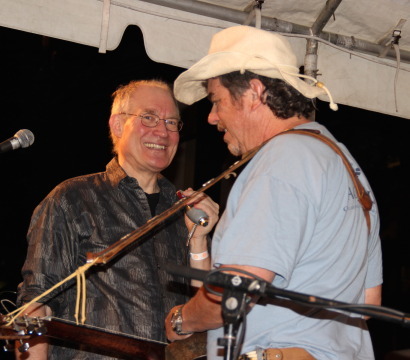 Dave Plaehn and Jeff Hino have been performing their own distinct blend of acoustic and electric blues, folk, and original material since 1990. At their core, Plaehn and Hino explore the uncluttered powerful interplay of blues harmonica, National steel slide guitar, and vocals in the tradition of bluesmen like Robert Johnson, Slip Harpo and Elmore James.

A typical Plaehn and Hino set features traditional blues, originals and contemporary and creative interpretations of current artists like Taj Mahal, Sonny Landreth and John Mayall. But Dave and Jeff can just as easily surprise the audience with the high and lonesome sound of a country blues gospel song. It's a blues-based musical Cuisinart, with a enjoyable and varied blend in every performance.

Devoting his spare time to songwriting and recording and plugging his songs, Plaehn released an LP, SMOKIN', in 1981 and, then, an EP, MOUTH FULL OF BLUES, in 1982, both on his own label, Pilot Records. SMOKIN' featured all original, mostly pop songs.

"An Iowan worth watching and listening to, Plaehn's nearly flawless six-song EP . . . Plaehn's able-bodied singing and soulful sense of hymnody and rural blues forms that give this rounder it's wings. . . . `Vigilante Man' will make you soar. . . . A-" --- City Pages, Minneapolis

In 1984 Dave left Iowa for Oregon, where he continued songwriting and performing with a number of local acts including the regional act, NEAL GLADSTONE & COMPANY.

Tucson Arizona's country rock crowds lured Hino out of rock and into the high and lonesome bluegrass sound.

In the mid-70's, Hino migrated to the Northwest, where he studied and experimented with country and city swing on dobro and lap steel. He appeared in a mouthful of Mid-Willamette Valley incarnations of bluegrass, country-western, cajun, and hillbilly jazz groups, including the Highwater String Band, Spontaneous Combustion, The Sophisticado Swing Band, Cow Patty & Pals, and Waterbound. It's not uncommon for Hino to have five instruments on stage at one time, including National steel guitar, dobro, acoustic guitar, lap steel, and 5-string banjo. Meeting Dave Plaehn in the late 80's, Dave and Jeff played their first duo performance together in 1990. Five years later, the duo recorded their first CD on Nontrivial Records;On Your Bond, a mix of rural and urban blues, along with a George Jones classic, Buddy Holly's Not Fade Away, and one of Plaehn's originals.

Jeff has become a well-known and respected blues slide guitarist in the Mid-Valley, playing lap steel---not a common instrument--- National steel guitar, and Dobro.  But he also brings unique flavors to the bues with 5-string banjo and ukulele.

One of the curators at the D&J Blues, Rock and Heavy Metal Museum was going through one of the vaults recently and came upon an old live recording of us. After listening to it, she contacted us immediately at the local blues retirement home. We put in our hearing aids and listened carefully over the phone. We both commented on how much "pep" we used to have!

With more listening, we decided "We've got to get this out into the world!" And so it came to be.

Our new CD is called

It should be available online now or soon and is already on a number of streaming services, including Spotify and Apple Music.

Here is a link with various song snippets and streaming links:

What is your opinion on the current state of live music in our area? This letter, written by Jeff with help from local musicians, adresses some of the concerns we have as hard-working artists facing diminishing returns from our efforts to keep live music a vital part of our community.  Over 50 local musicians signed the letter, which was published in January in the local Corvallis alternative weekly, The Advocate. You can read the letter here on page 6. Your ideas are welcome as we move forward to build a conversation among musicians, club-owners, and the public on this important issue.

Remember you can purchase the music of Dave Plaehn & Jeff Hino on CD Baby and iTunes! Just search for Plaehn...not many of them out there!  You'll find our two CDs "On Your Bond" and "Can't Get My Rest" as well as recent solo releases by Dave.  And remember, you can also listen to us on Spotify!

Jeff will be sharing an evening with the new Audrey Perkins Band, with Mike Gratin on bass and Tim Hardin on guitar. This will be a very special evening, as Audrey is moving her incredible voice into some new musical territory. The evening will also feature mini-sets by both Tim and yours truly, exploring our own music with the help of the band.  Plus, incredible edible cookies as usual.  Don't miss this one.

Gary Nolde will be joining us on drums and vocals. It will be a hoot-and-a-half!

A benefit performance for the Linn-Benton Food Share will feature the Plaehn-Hino Blues Band with special guest Creighton Lindsay on guitar.  Bill Foss on bass and Gary Nolde on drums. Dress to the nines and be ready to dance!

Happy to be back at the the Big River after a short hiatus for Dave to recover form knee surgery. He will be able to finally do the splits again on stage!

Dave and I are kicking off a new (possibly regular monthly) venue at Cloud & Kelly's. We'll be joined by drummer Gary Nolde, JG on bass, and special guest star Creighton Lindsay on guitar. It's a very music-friendly venue, with stage, lights, and a great P.A--not to mention great drinks and food!

The Dynamic Blues Duo Returns! Dave & Jeff will be playing in their original classic acoustic duo format at the LBCC Benton Center lounge on Friday, October 21st, from noon to one. Bring your lunch and love of blues!

Dave and Jeff bring their acoustic duo to perhaps Corvallis' most listenable venue, the Corvallis Folklore Society's Best Cellar. Come on down to First United Methodist Church 1166 NW Jackson Avenue,on the southwest corner of 11th and Jackson. We will perform in the community center room downstairs. Complete with great cookies. Marshall Adams opens, with Dave and Jeff starting at 8:30.

Friends of the Valve Turners and 350 Corvallis present an evening of music, entertainment, food and drink. Fundraiser to benefit the Climate heroes, The Valve Turners. Doors open, food and drink for sale, informative videos shown, starting 6:30. Music program begins 7:00 pm--featuring Gumbo, Plaehn-Hino Blues Band, and Bryson Skaar. Valve Turner Leonard Higgins will be speaking, along with Lauren Regean, his defense attorney and head of the CLDC.
Admission: Suggested donation $20.00. 21 and over.

Dave & Jeff look forward to performing with special guest Bill Foss on bass at the Salem Hayloft is a Concert Series.Hosted by Sharon Moore in her hayloft on her beautiful farm just outside of Salem, Sharon does these concerts every summer from May through September on the second Friday of the month. Wonderful acoustics and a truly rural intimate setting will certainly bring out the best of any music.

Although cash donations are what make the series run successfully, the event is free and open to the public, so please make sure to arrive early - it always fills up quickly.

Dave and Jeff bring their acoustic duo to perhaps Corvallis' most listenable venue, the Corvallis Folklore Society's Best Cellar. Come on down to First United Methodist Church 1166 NW Jackson Avenue,on the southwest corner of 11th and Jackson. We will perform in the community center room downstairs. Complete with great cookies. Marshall Adams opens, with Dave and Jeff starting at 8:30.

The full-tilt Plaehn & Hino Blues Band will be gracing the stage at one of Corvallis's newest and hippest music venues. Great sound, dance floor, and tasty pizza will abound. Music starts at 10pm and goes into the wee hours. Cover charge.

Dave & Jeff with the other boys in the band will be ringing in the Summer Solstice in the pastoral setting of Emerson Vineyards. They have a wonderful outdoor venue (weather permitting) and a great indoor space (weather not permitting.) The view, the wine and the setting are to die for. Gaze out over the Willamette Valley whilst sipping great wine and listening (and dancing!) to some good solid blues and R&B. We are looking forward to this gig. More details to follow.

Delighted to play for the CBA up in Portland. Great night for the old duo!

Contact Information
A blues sound for all occasions.
The Plaehn and Hino sound is centered on the duo of blues harp and slide guitar. But for larger venues, and when dancing is desired, Dave and Jeff can perform as a trio (with electric bass), or appear as the Plaehn & Hino Blues Band quartet (bass & drums) and larger ensembles (with guest vocalists and/or guitarists) to match the mood of any event.