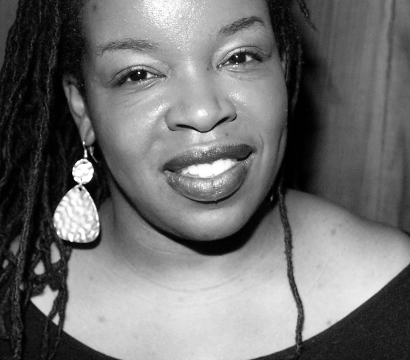 Kelly Harris' poetry is smart and accessible. Bold and musical. Political but more thoughtful than a rant. She writes with care and conviction and delivers powerfully. She masterfully combines her performance roots with her academic training. She bridges page and stage. A shocking and needed sound to our senses.

"She is the sound of wonderful." - Kalamu ya Salaam

Kelly has appeared in plays in Ohio and has performed poetry nationally. Her publication credits include poems in PLUCK Magazine, the University of Alabama’s Literary Magazine; Yale University's Caduceus Journal, Say It Loud: Poems for James Brown Anthology, Reverie Journal, and The Southern Women’s Review.

Harris is a 2007 Akron Art Museum New Words winner. Her poem has been published on RTA metro buses in Cleveland, Ohio. She is a Cave Canem fellow, one of the nation’s most prized fellowships for African-American poets. The Fine Arts Work Center in Provincetown also awarded her a residency in 2006. She is the producer/editor of the CD Fresh Flames: Cleveland African American Voices. She has curated exhibits for Cleveland's Rock and Roll Hall of Fame and Museum, New Orleans' Ogden Museum of Southern Art, and other arts/cultural institutions. She was a featured poet on the Lifebanc Spoken Word for Life Tour. In 2002, she won the Wendy L. Moore Emerging Artists Award from the Museum of Contemporary Art in Cleveland. She is also the founder of Poems & Pink Ribbons and BrassyBrown.com and occasionally freelances for various media outlets.

Commissioned Writings
She has been commissioned to write poems for: The National Park Service, The Greater New Orleans Foundation, The Foundation for Louisiana, Cleveland Breast Cancer Project, Institute for Women & Ethnic Studies, NCCJ, Planned Parenthood and more. Her ability to give voice to a moment/issue with cultural care, insightfulness, creativity and poetic innovation is what makes her compelling.

Harris is also known for lending her talent and professional skills to causes and non-profits. She has a wide range of non-profit experience. She served on the Cleveland Literary Center Executive Board for three years. She served six years on the board of STAIR NOLA (Start the Adventure in Reading). She currently serves on the board of Big Class NOLA, a youth writing program for youth.

Poem airs on The Reading Life with Susan Larson

Presenting on the panel: Black Women Artists and Identity.

Contact Information
I would love to hear from you!
Information Request