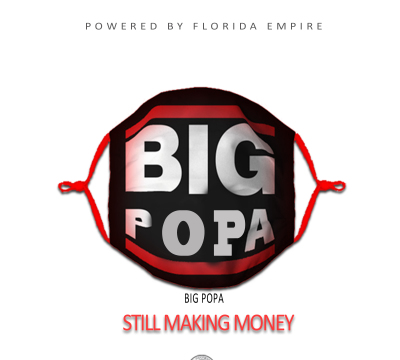 BIG POPA is the Rapper who just wanted the world to Listen to his music?

In the music business, perhaps the two most important factors that will dictate an artist’s success and longevity outside of their talent is their performance name and title of their album or mix tape. Take for example, a rapper with the stage moniker of BIG POPA and a album self entitled BIG POPA, one need only research the definitions of a "BOSS" to fully understand whom the artist im talking to you about and what they stand for. Well, meet Robert Howard a/k/a BIG POPA, the new voice of hip-hop and the South’s hardest grinding MC to emerge in years.

BIG POPA along with his brother/manager Mr.Baggs both work ethics combine are a.k.a The Dynamic Duo.Together they have founded the label "Powered By Florida Empire"

together they own and operate mulitiple successful business in the City of Orlando Florida. PBFE

Their work ethics and loyalty reminds you of P.Diddy and Biggie "They Have that BAD BOY energy "Can't Stop Won't Stop" PBFE  (Loyalty over Everything).

As civic minded as he is talented,There is a fee to book him however,BIG POPA regularly performs free of charge for numerous charitable causes.

BIG POPA has traveled around the country selling thousands upon thousands of his many mixtapes CDs, DVDs, t-shirts, ball caps,posters and PBFE merchandise to help fund his career,all at his own expense.

Stay tuned for the 2020 re-release and promo for all Preach projects.....

Preach407 has dropped singles all summer long with his new artist YOUNG FOREIGN signed to POWERED BY FLORIDA EMPIRE  getting the streets ready for his best work yet to come. THE ALBUM  "BIG POPA" (2021) with all oringinal production from track record platinum producers.

It won’t be long before fans and major record label executives everywhere anxiously awaits to hear what the man they call BIG POPA has to say next.

back in the studio

Preach back in the lab working on his upcoming project "POPA"

PREACH407 BACK IN THE STUDIO

HIGHLY ANTICIPATED ABLUM IS SOON TO BE RELEASED "KING OF ORLANDO"

the newley signed artist to the Powered By florida Empire label Young Foreign teams up with the orlando king preach407 to deliver the highly anticipated mixtape "POWER". hit single "MONEY" already heating up the streets everywhere.

COPY THE LINK BELOW (download the mixtape for free)

Wednesday - Sunday
Come to the PBFE music and more store located in the Magic Mall Orlando Florida (hip hop, new R&B,best of the 90's jamz, reggae dance hall & culture.
slowed down music, new & old Jam Pony, major & independent artist ,
music videos and more....)
Get your custom music list on CD.Phone & USB done in just 20 mins....
If you an artist and you need your music promoted at my record store.

WHEN POWERED BY FLORIDA EMPIRE AND APEX COTURE MAGAZINE COME TOGETHER EVRYTHING IS BIG!!!

Once again we brought all the starz out for a cause greater than what a small mind could fathom. V.I.P. at Beacham Orlando for Preach407's "Popa 1000 grams" Album and "Fly me to the Moon" video release party!

27 Bottles, Prominent Players, move makers and heavy hitters out the city turnin up to the max with all love and support like we do always.

The sky is no longer the limit because we be on the Moon!
Everyone dressed to impress and got their game faces on while bottles are bein popped and the fluid is lucrative in all the action and lights...

IF YOUR IN ORLANDO FLORIDA

GET AN AUTOGRAPH PICTURE WHEN YOU PURCHASE HIS NEW ALBUM

THIS IS NOT ATL, MIA, CHI, NY, H-TOWN, L.A. OR MEMPHIS... THIS IS ORLANDO AND WE COMIN FOR OUR SPOT IN THIS INDUSTRY WITH A MAJOR MOVEMENT SUPPORTED BY THE KINGS OF THE CITY!!!

On this night we dedicated our time and energy to one thing and one thing only... Delivering "Popa 1000 Grams" to the industry with a major force behind it... (http://www.datpiff.com/Preach407-Popa-1000-Grams-

(http://www.datpiff.com/Preach407-Popa-1000-Grams-mixtape.661755.html) The power of the starz of Orlando. Such a beautiful thang how we showed up in numbers to make sure the homie Preach407 is backed up by the city's elite.. People like Grand Daddy Souf, Disco and the City Boys, DJ Baby Lac, G-Money, JailBird and Clay D just to name a few but the building was filled with Orlando's star power.

It was all lights, camera action and you could feel the love and support. Something we been needing in our city for a very long time. This event proved that we can and do possess the power to make a major dent in the industry like Atlanta or Houston but it's up to us and the big homie Preach407 (Popa) and the whole Powered By Florida team is helpin lead the way.

With the positive vibes, good food, the loudest green and top shelf drinks flowin the networkin was at an all time high. Connections being made across the board and of course the city endorsed Apex Coture Magazine deeming us the platform for the city. Like the homie Popa say, "It takes all of us". Ain't no one person bigger than what we gotta do for our city.

ALL FANS & LISTENERS PLEASE CAKEOVERALL IN TONIGHT AT 10PM EST

SAY : PBFE WE THE TAKEOVER

DRINKS IN THE AIR VIDEO SHOOT

#PBFE #SO SERIUOS @ a private location

Friday Nov. 1st 2013
7pm - 9pm
KDS MUSIC STUDIOS
7566 Southland Blvd.
Orlando Fl.32809
If you cant attend,
Make sure you get your copy and download it from all mixtape sites.available everywhere.

(Thank you for supporting Preach407)

Friday Nov. 1st 2013
7pm - 9pm
KDS MUSIC STUDIOS
7566 Southland Blvd.
Orlando Fl.32809
If you cant attend,
Make sure you get your copy and download it from all mixtape sites.available everywhere.

(Thank you for supporting Preach407)
Download and get your copy)

The Techno Revolution WILL be televised...!!! Live In concert PREACH407 CLUB PARAELLE

Technology has taken over our government.A new sound has emerged Electro-Progressive, Trap Music,Deep Bass Beats has been fused into Hip-hop hardcore Rap.Now the music comes to life.Next Wednesday June 25th Club Parallel hostest the Party of all Parties..PBFE & Project Armageddon" Presents PREACH407 Live!!!
Rise of the Machines".
Music by D.J. Jay Havoc.
Techno,House,Trapmusic,Bass.... spreading like a virus. The event you dont wanna miss....Party like a Rock star!!! TURN UP!!!

CLICK THE LINK BELOW
(TICKET & MORE INFORMATION TO WATCH THE VIDEO)