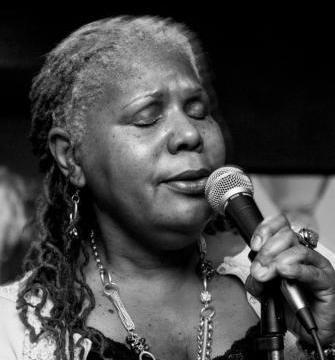 “People cheered,” she recalled. So she learned a new blues song each week and sang it at subsequent jam sessions. “I fell in love with the music. The blues and I fell in love with each other,” Rutherford said. That love affair is so abiding that she leads her own her blues band, Raven and Her Sweet Potato Pie Band.

Rutherford, who owns a pie company called Blk Bird Pies, and her band will be playing one set at the Saturday, Aug. 8, Jazz Blues and More Under the Stars series at the Albuquerque Museum Amphitheater. Performing with her will be drummer Analdo Acosta who alternates with Melvin Crips, guitarist Greg Duffy, bassist Jeff Sipe and Ron Lipton, who plays blues harp, saxophone and flute.

When Rutherford was diagnosed with breast cancer the year before last, the blues came to the rescue.

“Most of the time I was in treatment I was in a lot of pain,” she said.”I would sing and it would transport me. … My feelings about having cancer, the uncertainty, the blues helped me. They help me get through anything.”

In the other set, the Memphis P’Tails will be on stage. Darin Goldston is on lead guitar and lead vocals, Charlie Brown on drums, Noah Martinez on electric bass and Skinny Denny on blues harp.

It happened like this: one day, Raven Rutherford was sitting in the living room of her apartment in south central los Angeles, and God told her to make pies. she had been working three jobs, trying to squeeze in time with her kids, and wondering what other option there could be for her. but pies? At first she scolded the idea. do you know how many pies it would take to support a family? forget it. but then she couldn’t quite shake the conviction that this was to be her path. Pie making goes back deep in raven’s family heritage.

Her great grandmother taught her grandmother, who in turn became the family’s master pie baker. raven’s first job in the kitchen was simply to watch. “i was eight or nine before my grandmother let me have my first job, rolling out the dough with the big rolling pin. then, when i was old enough, she taught me how to use a paring knife, and i began peeling the fruit. my grandmother was meticu- lous. everything had to be just right. i got that from her!” it was rural nebraska, and her grandfather was a traveling minister. “on sundays he’d go around to all the farms and come back with bushels of peaches, bushels of apples or corn to bring to my grandmother. then we’d put up whatever we could for winter, like jellies, make pie filling, and even make pies and freeze them.” Years later, when raven sat in her living room struggling with her “doubting spirit,” it was her grandmother’s voice that came back to reassure her. How could she possibly make enough pies to have her own business? Just pour and bake, pour and bake.

Party on The Patio!

Raven will be the featured vocalist for the Memphis P-Tails! Come celebrate the New Year with Raven at the Pueblo Harvest Cafe.

Raven Rutherford brings her Quartet to Zinc for a Thursday Night full of wine and music!

Raven Rutherford brings her Quartet to the Albuquerque Brewing Company

Raven Rutherford & Her Sweet Potato Pie Band at the IPCC

Join Raven Rutherford & Her Sweet Potato Pie Band at the Indian Pueblo Cultural Center for a night of Blues/Soull and Rock & Roll.

Come on down to Albuquerque Brewing Company for some hot blues and cold craft-beer! #LocalMusic

Join Raven Rutherford & the Sweet Potato Pie Band for the Party on the Patio at the Indian Pueblo Cultural Center! All you can eat hand-crafted Pizza, drinks and great music!

Join Raven Rutherford & Franc Chewiwie at the  Indian Pueblo Cultural Center for a night of Latin Sounds and Dancing.