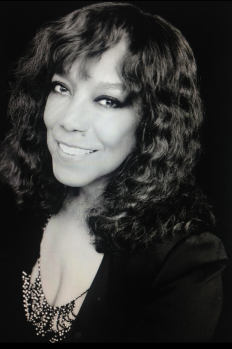 Rita Graham’s career as a jazz vocalist was jump-started when Ray Charles produced an album of lush standards for her in 1969. The album, ‘Rita Graham Vibrations’ is the only album project that Ray Charles personally produced for a single female artist on his own Tangerine Record Label.

After a stint as a Ray Charles Raelette, Rita recorded several single recordings with TV Composer, Mike Post (Law and Order, Hill Street Blues, A-Team, etc). She was featured vocalist with The Harry James Orchestra for 3 years, and with Mercer Ellington and the Duke Ellington Orchestra, Tour ‘82. She was a featured artist with Oscar Peterson, Ray Charles, and comedian Redd Foxx, and others. She has performed in Festivals, Night Clubs, Casinos and Concert Venues in Las Vegas, Canada, The UK, Australia, Japan, Taiwan, Manila, Bangkok, and Russia. She originated the role of Coretta Scott King in the Civil Rights Theater Musical, ‘Selma’, produced by Redd Foxx Productions in Los Angeles, and off Broadway’s New Federal Theatre, produced by Woodie King, Jr.

As the lead vocalist in Rita and The Tiaras, Ms. Graham recorded the UK Northern Soul Hit Classic, ‘Gone With The Wind Is My Love’. The Tiaras were studio singers whom Rita never met. A track from the Vibrations album, ‘My Cup Runneth Over With Love’ is also a Northern Soul Hit.

From 1999-2009, Ms. Graham was known as ‘The First Lady Of Sambuca Jazz Café’, Atlanta’s premiere Showroom, where the CD, ‘Rita Graham Live at Sambuca Atlanta’ was recorded. (Available upon request) She performed in concert in the Sammy Blue/Rita Graham Classic Blues Duo.

Rita Graham’s suspense/murder mystery novel, ‘Karma Rising’ is available on Amazon.com, Kindle, Nook, and other Booksellers, and is soon to be a five-part limited TV series.

Rita plays the female lead role of Lilly King in the 2016 Feature Film "We Are Kings" and is a cast member of "Billie The Musical" staged at The Crest Theater in Delray Beach, Florida, in March 2018. She is the Jazz Vocal instructor at Georgia State University and a Board member of Women in Jazz South Florida, Inc.