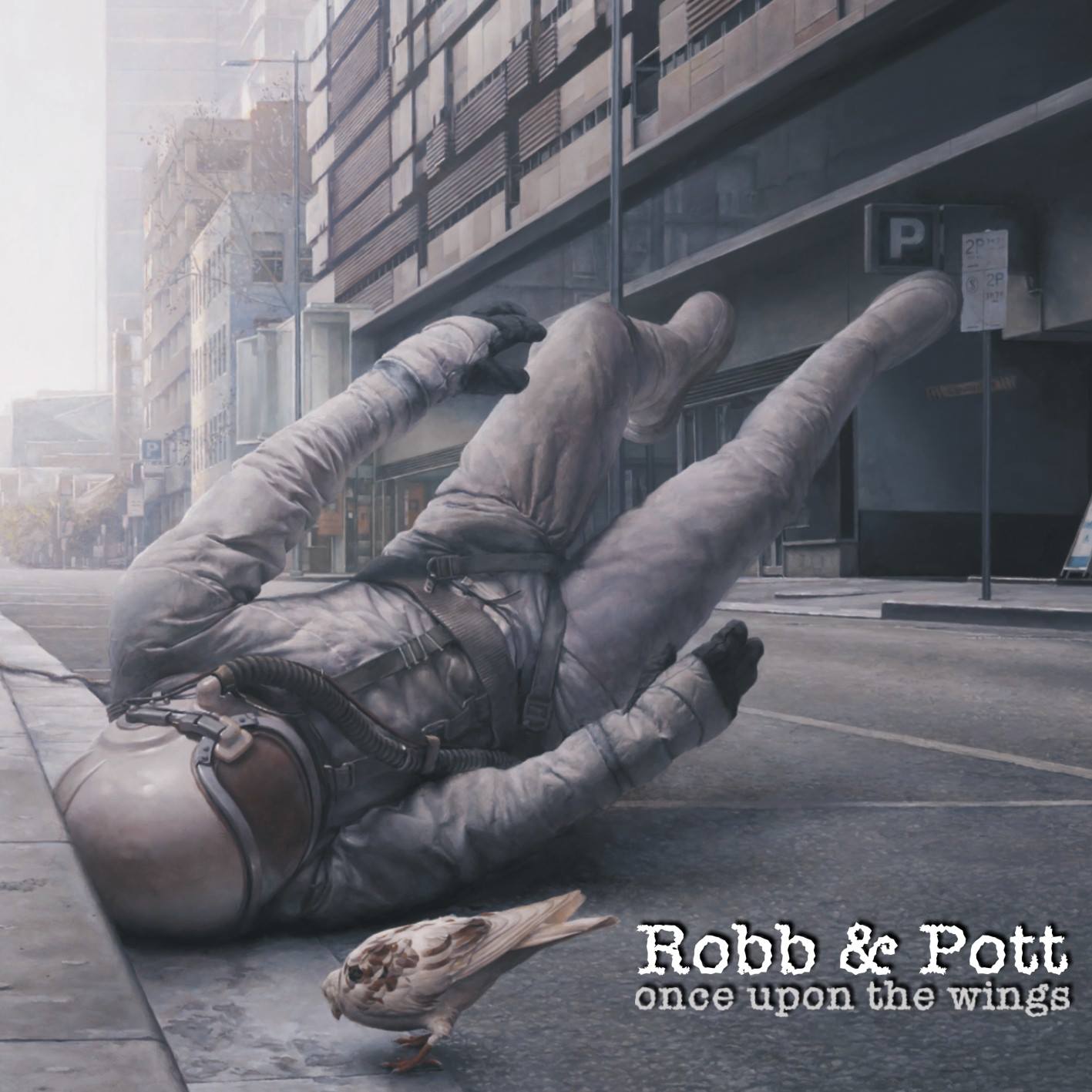 Once Upon the Wings
By
Robb&Pott

Most musicians after they have discovered their instrument of choice, enjoy playing with their friends, jamming in garages, at backyard parties and around campfires. Though some go professional eventually – there remains the attraction to return to those days of jamming and making music with good friends and like-minded musicians we meet on the way. It is this underlying sentiment that inspires this project simply called Robb&Pott. The last names of two friends.

When Robbi performed with Tibe after Tribe at the Burg Herzberg Festival he briefly met Paul who was part of the film crew Andi Weimann put together to capture Tribe live. Years later Paul would help Robbi to get his new album with 3rd Ear Experience to labels and promoters. At that time Robb did not know that Paul played bass in one of his favorite Space rock bands: the Space Invaders. This came as a great surprise. Slowly over the years their friendship developed until it was inevitable that the desire arose to do an album together – just for fun. Thus was born Robb & Pott.

Though they live thousands of miles apart, Paul Pott in Wettenberg Germany and Robbi Robb in Joshua Tree California, technology has made it possible for them to manifest this album. Paul would create grooves on bass and drums at his home studio, then send mp3’s to Robbi who would in his own home studio jam across these tracks till he found his guitar parts – then send the guitars to Paul. Slowly the music would take shape. The first piece of music they worked on they decided to call Space Ear – a name derived from the names of their two current bands – Space Invaders and 3rd Ear Experience.

During this process Robb discovered a song that he wrote when he was 15 years old called Looney Tune. After sending it to Paul both of them laughingly decided that it would be fun to do it as part of this adventure. The lyrics were written at a time when there was no such thing as a personal computer. The song is laced with references that today are second nature.

Once on a green day, I was in long grass
And you came nestling, silently by
I caught your long hand, fingers of satin
And on the long grass, together we lie

Both Robb and Pott are psychedelic space rock nerds. Paul has had the honor of working with space rock pioneers Damo Suzuki (Can), Mani Neumeier (Guru Guru) and Nik Turner of Hawkwind fame. Paul turned Robbi onto Sam Gopal, a 60’s psychedelic band featuring the late Lemmy Kilmister of MotorHead on vocals. The music so inspired Robb that they decided to cover the song Grass. The song features a segment of a poem by South African poet Ingrid Jonker who committed suicide by walking into the sea. The segment is read by Amritakripa, Robbs wife and keyboardist for 3rd Ear experience.

Flesh and Steel was written by a good friend Alan Rose whom Robb had the pleasure to play and record with as a teenager. The sci-fi lyrics of the song naturally opened the doors to a great space rock jam. Space rock being one of Pott and Robb’s favorite genres the song was chosen as a second cover. As fate would have it Robb got to record the guitar solo in Paul's studio in Germany.

In October 2015 Robb’s band 3rd Ear Experience was invited to tour Europe by Sound of Liberation. Robb decided to fly in a few days earlier and Paul booked a warm up gig where the two of them could get to jam live together. Paul brought in his remote recording set up and recorded the jams. Prophecy#1 is the result of this evening. The chemistry between Robb and Pott is self-evident in this jam. Two like minds coming together in the spirit of fun. Joining them live on this track is Space Invaders drummer Dennis Gockel and Fever Dog drummer Joshua Adams on keyboards.

The album cover art was designed by Jeremy Geddes. Jeremy studied painting at the Victorian College of the Arts and began working full time as a painter in 2003. He’s most well known for his paintings of cosmonauts and people floating, falling, colliding and drifting in empty landscapes. Jeremy was born in Wellington, New Zealand, and now lives in Melbourne, Australia with his wife and whippet.

Once Upon the Wings is a fun album by two guys having fun – we hope you enjoy it as much.

FOR YOUR EARS ONLY : a Link to Hi rez Mp3's is on the contact page.

Produced by Paul_Pott
Mixed and Mastered by Matt Korr

Album available for purchasing at: