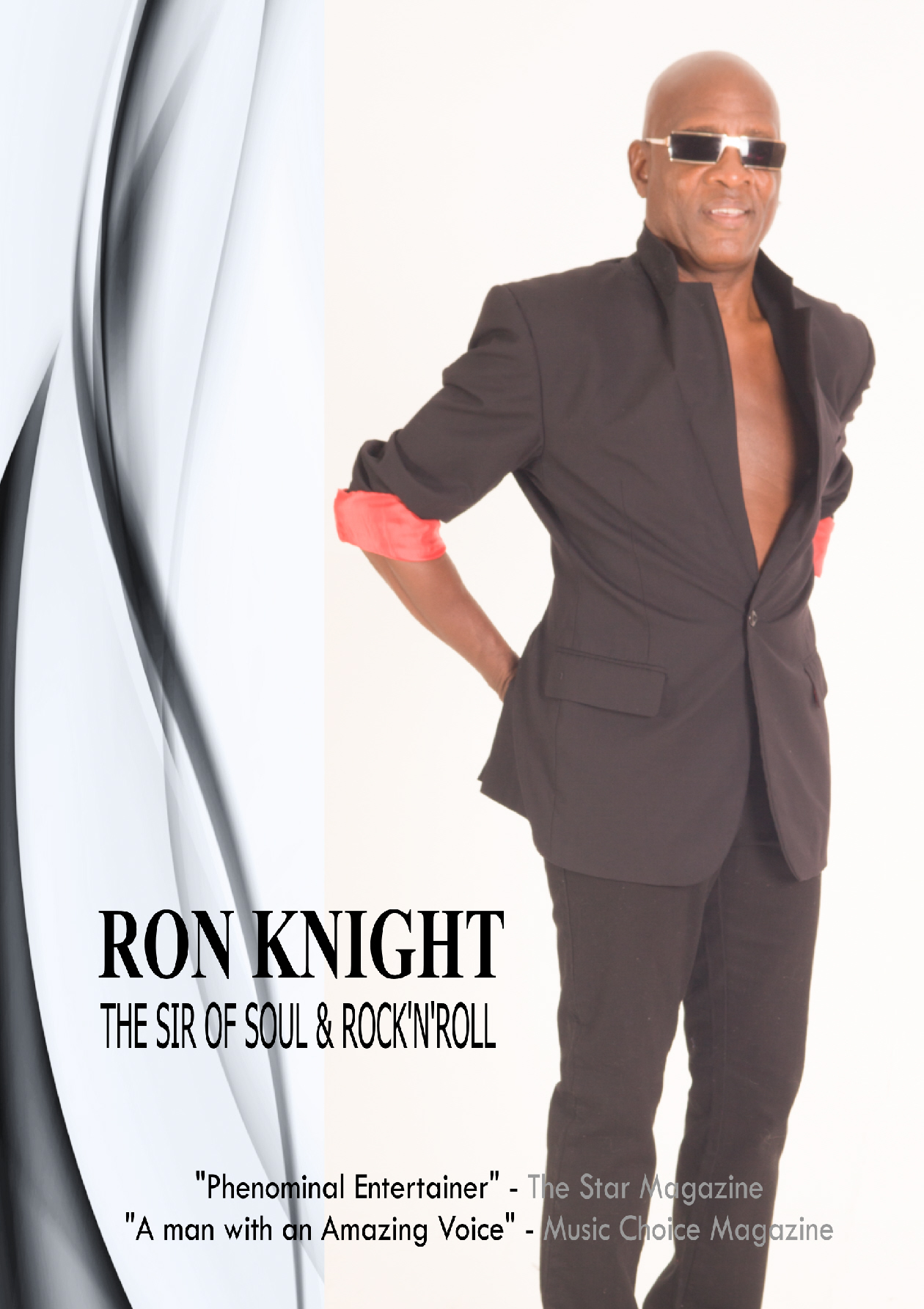 Not only is Ron Knight CEO of Entertainmentfirst a successful Entertainment Company based in Las Vegas -
considered "The Entertainment Capital of the World"..................
but he also finds the time to travel the world with his sensational voice, he is one singer that makes entertaining audiences look easier than saying hello to a dear friend.

Ron Knight has performed on stages and major television production shows that you would remember including;

* Fox TV's Performing As - where his tribute to James Brown was astounding, leaving the crowd wanting, much much more....

* Discovery Channel (currently airing 4 times a year) You will also catch Ron Knight's Las Vegas Story on the Discovery Channel - thru which Casino Diaries shows the real side of the entertainment business, show is repeatedly shown each year.

As a smooth voiced performing artist, Ron tours as a solo artist, with his band members or with his orchestrated and choreographed show with his dancers and showgirls - depending upon the engagement..........

Ron Knight is truly an Artist that will give your evening the perfect sound & touch.
He has a one-of-a-kind voice that is not to be missed!!

If you are looking for an Artist that can bring you Top Quality Music and Variety with a little Smooth Jazz & R&B, a little Motown, a little Country, a little Disco, a little Pop and A LOT OF SOUL - then RON KNIGHT is your Man!!!

From Solo Artist to fully charted Orchestra & Costumed Show.
RON KNIGHT has a team to bring it to you!

Ron Knight featured entertainer at the St. Jude's "Heart of Fashion" at the Las Vegas BallPark

Ron Knight featured entertainer at the St. Jude's "Heart of Fashion" at the Las Vegas BallPark

RON KNIGHT RETURNS AGAIN TO THE STIRLING CLUB for a GREAT NIGHT OF LIVE ENTERTAINMENT - Kick off your Christmas Season with us.
Come out and ENJOY "The Sir Of Soul & Rock'n'Roll"
SUPPER CLUB EVENT - 6-9pm
DRESS TO IMPRESS, TABLE RESERVATIONS ARE A MUST
CALL NOW_ 702-732-9700

RON KNIGHT  "The Sir Of Soul & Rock'n'Roll"
RETURNS AGAIN TO THE STIRLING CLUB for a GREAT NIGHT OF LIVE ENTERTAINMENT -
Soul music at it's best!!

HERE WE GO - RON KNIGHT RETURNS AGAIN TO THE STIRLING CLUB for a GREAT NIGHT OF LIVE ENTERTAINMENT -
Come out and ENJOY "The Sir Of Soul & Rock'n'Roll"
SUPPER CLUB EVENT - 6-9pm
DRESS TO IMPRESS, TABLE RESERVATIONS ARE A MUST
CALL NOW_ 702-732-9700

WOOOHOOO
It's gonna be a great night.
Come one come all - Dress to Impress
A Supper Club to remember at the STIRLING CLUB LAS VEGAS.

Ron Knight returns to the STIRLING CLUB - May 14

Ron Knight returns to the STIRLING CLUB - May 14 - Supper Club Event (6-9pm)
after a successful engagement in March Ron Knight now returns to the club with his sensational voice, this time Nevada residents and their friends can attend the evening.
inside the Turnberry Place - Paradise Rd Las Vega
Dress code enforced. Must have a reservation. Call 702-732-9700

Ron Knight is set to perform live at the World Famous STIRLING CLUB in Las Vegas.
Come out and enjoy this Supper Club Event series

Ron Knight and the Daze Band return to the Wicko

Ron Knight and the Daze Band

Ron Knight brings entertainment to life at the 12th Annual Music and Fashion Expo Las Vegas - with his smooth voice he is a talent with a lasting impression.

Ron Knight has yet another successful turn out for his 10th Annual Music and Fashion Expo Las Vegas at the Alexis Park All Suites Resort Las Vegas.

Ron's ebook - How to Make it in the Music Business, The Real Way

How To Make It in the Music Business
- The Real Way -
Ron Knight has just released his first book - currently available online thru booktango.com

Here is a small excerpt from the book;

When I first started out to pursue a professional career I was about 8 years old, my brother Arthur had scored a hit record in the 50's with a song called "Seven Wonders of the World" and the flipside was "A Fool in Love". (Arthur Knight and the Keytones, yep Arthur Knight I'm proud to announce was my big brother.) I felt at an early age that I wanted to be involved in entertainment in one way or another, either through sport or music as they were my passions, singing, playing trumpet and baseball all through my school years, so by the time I reached college I felt I was ready to make my decision, but now I had to see if I had the guts to sustain a career out of music. Now after 4 decades in the Music Business as a successful International Entertainer, Ron Knight shares his story and know-how with others striving to make a living from their music.

Ron's book is available in e-book form and can be purchased now online for only $7.99
Kindle store at Amazon.com
or at www.booktango.com

once you get to booktango.com just search the authors name "Ron Knight" inside the bookstore.

Please refer to the agency that has sent you to my online press kit.


For all other inquiries;