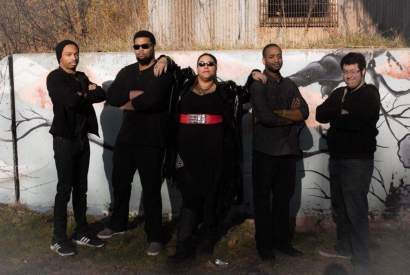 With a rich range of musical influences spanning from rock and roots legends Hendrix and Marley to Red Hot Chili Peppers and Led Zeppelin Roxolydian sounds like a culmination of raging rock rhythms and soulful, funk laden sounds.

12 acts not to miss at Hamtramck Music Festival

Roxolydian offers the rock/soul hybrid you've been missing in your life, whether you're aware of that fact or not. Lead singer/guitarist Deekah Wyatt is a force to be reckoned with. She can wail at the top of her lungs like Sleater-Kinney's Corin Tucker, and bring soul to the mix like Alabama Shakes' Brittany Howard. And the rest of the band isn't too shabby either. They just added a third guitarist to the mix so that two can play off each other while Wyatt handles the rhythm. - Mike McGonigal, Metro Times Detroit

"Deekah Wyatt is a rock Goddess. She hones her craft with the purity of Janice Joplin... [Roxolydian's] music is open and honest and it strikes a chord that is connected to the past." - Katherine Mills, Metronome Theory

"Wyatt is a ferocious stage performer, a guitarist and singer who displays her passion for rock music with every show." - Steve Furay, The Michigan Chronicle

"Some notable performances were Deekah Wyatt, innovator of the annual Cosmic Slop Music Festival [Southeastern Michigan]. This woman's fingers and the electric guitar are truly a match made in musical matrimony."

"Her voice reverberates off the walls. Her version of Robert Nesta Marley’s “Redemption Song” cuts to the bone...." - Rhonda Welsh, theexaminer.com