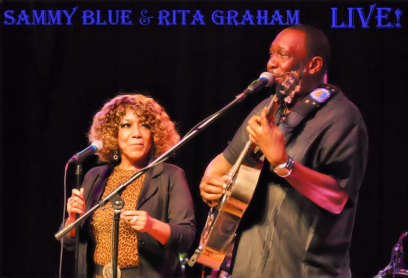 The Blues duo of Sammy Blue and Rita Graham represents a convergence of talent, charisma, authenticity and tastefully curated Blues & Roots music. The act is designed to be a crowd pleasing experience in every performance, from the largest festival to the most intimate club or private event. Both artists are seasoned professionals who's dues are paid in full. Between them, they've performed in the US, Europe, Asia, Russia, Canada, Australia, Las Vegas and Central America.

Rita is a former Raelette, featured vocalist with the Harry James Orchestra and the Mercer Ellington and Duke Ellington Orchestras. She was also a featured vocalist with Oscar Peterson, Ray Charles, Kenny Burrell, Joe Pass and famed comedic icon Redd Foxx. In addition, Ms. Graham recorded the Northern Soul Hit classic "Gone With the Wind is My Love" as Rita and the Tiaras. Another Rita Graham Northern Soul hit is the song "My Cup Runneth Over With Love" from her "Vibrations" album. And, the "Vibrations" record remains the only album Ray Charles personally produced for a single female artist on his record label, Tangerine Records. Ms Graham is a published author. Her suspense Novel, "Karma Rising" has been adapted for a movie screenplay. She is an accomplished Actor who's appeared as the female lead in the Civil Rights Musical "Selma" off Broadway. She recently Co-starred with Sammy in the indie film "WE ARE KINGS". Ray Charles once told her, "Miss Rita, you should sing the Blues." And so she does, with passion, class and a rare sweetness that's like a spiritual massage for the listener.

Hottrax Recording artist Sammy Blue is rare indeed. He was nicknamed the "Crown Prince of the Blues" by the late great Muddy Waters, and called "The best kept secret in Roots Music" by Taj Mahal. Mr. Blue is one of the most versatile and soulful Blues artists performing today as witnessed by Chicago Music Magazine, who wrote, "Sammy Blue is one of the top five artists to watch." And, about his Grammy-nominated CD "Sammy Blue, A Blues Odyssey", Big City Rhythm & Blues Magazine wrote "this Blues Odyssey is an expansive journey."

In addition, his first CD for Hottrax Records "Everythang & Mo" was nominated for a Grammy and the title track "Everythang & Mo" appears in the Clint Eastwood movie Trouble With the Curve. He has music in TV and as a lead cast member in the stage play SPUNK he performed all the music on guitar as the character "Guitar Man". Sammy and Rita's Lead roles in the indie movie "WE ARE KINGS" earned the movie the prestigious Dove award.

He is current awaiting the 2018 release of the international musical movie "Soul GUYS". He appears in the lead role. Sammy is truly a unique artist taught his craft directly by many of the great Blues artists of our time. Those experiences and influences have molded his own musical style based on Delta, Piedmont, Texas and Chicago Blues. His awesome stage presence is both engaging and inclusive as he totally makes the audiences feel a part of the performance with his charisma and worldly wit.

Through the years, Mr. Blue's musical versatility afforded him the opportunity to be the opening act for Muddy Waters, Buddy Guy, Albert King, Taj Mahal, Albert Collins, Johnny Winter, Delbert McClinton, The Wailers, Koko Taylor, Robin Trower, Memphis Slim and many other A-list performers. He leaves no doubt that he is an authentic, cultural Blues artist who epitomizes the current Black Renaissance of art and music in modern day America. Sammy is a true cultural artistic treasure and a genuine innovator of authentic Blues.