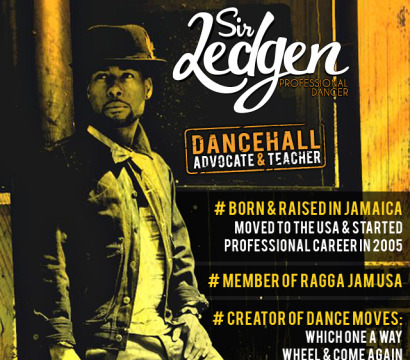 Jamaica West Indies born and bread “Sir Ledgen” has been taking over dancehalls, theaters and silver screens since performing at birthday parties and local events at a young age; anywhere he could find an audience.

Ledgen was a natural. Self-taught to this point, he relocated to the U.S. in 2002 and immediately jumped into freestyle sessions within Dancehall/Reggae circles and began his more formal dance education. In 2005, Initiating his professional dance career, Ledgen founded Urban Movement, a dance team at his college featuring base styles of Dancehall, Hip-hop and Old School Grooves.

He also maintains a list of VIP clientele, teaching private lessons, and specializing in camera work and live performance, as well as improvization, acting and occassionallly writes in his spair time and does some comedy; ie parodies, sketches etc.

As a Dancer & Choreographer, Ledgen often mixes freestyle with training that uniquely projects his thoughts into movement and expression through dance. He features an essence of Dancehall and created movement that illuminates strong tribal attributes and traditional dance with a new age twist. Always a student, Sir Ledgen's passion for the evolution of the craft and need to stay current keep him active in the studio working with Laure Courtellemont, Broadway Dance Center, Movement Lifestyle, and previously w/ Young Jean Lee Theatre Company, Rhythmology, & Alvin Ailey w/ Marjory Smarth.

Currently, Sir Ledgen is scheduled to go on another TOUR to Europe, March - April 2014, and teach workshops, classes and judge competions etc. Dates are TBA in the (Show List)

Come one and all, for love of Dancehall.

Sir Ledgen is now under new management and is available for Workshops, Events, Judging, etc.

Come one and all, for love of dancehall and take class with Ledgen: