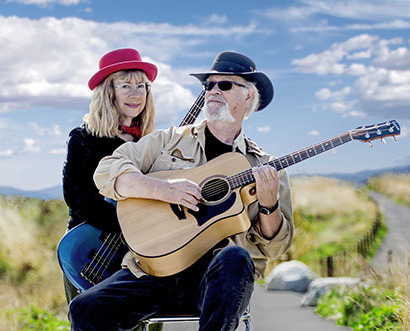 Steve and Kristi Nebel (pron. knee bull) learned their art during twenty years on the road performing their own songs in folk clubs, and at festivals. They just returned from a successful return tour of England and Scotland, wherein Steve’s songs have earned a loyal following. Each is an accomplished instrumentalist having played many styles of music over their years of experience. Kristi plays bass guitar, and Steve plays guitar.

Kristi recorded a solo western swing and Americana in CD in 2011. In 2014 one of the songs CD was nominated song of the year, and was chosen one of the top five for female performer of the year by the Academy of Western Artists. Her band, “Cowgirl’s Dream” is recording its’ first CD.

They are known for the Steve’s socially conscious, and for their working portrayals of fishermen and common people in their songs. “Raven Speaks” is a collaboration with Native American poet Duane Niatum. It is a commentary on global climate change using “Raven” of Native American mythology as a main character in some of the songs, and certainly in Niatum’s poetry.

About the songs in this project came the following quote:
"I think some of the songs are really quite extraordinary . . . -- Bob Sherman, "Woody's Children" WFUV, New York. The album was picked to be among the top ten of the year by Sherman for his award-winning show.

Their most recent production, “Tandem”, is the most sparse of their recordings and features only the bass guitar, and guitar along with their two voices.  “Tandem”, unlike their other recordings, was recorded in their studio "live". It is a genuine "do-it-yourself" recording.

“Angels of the Road’ has held me captive since I first heard it. . . the intensity of this song sung live puts it over the top. “It’s only faith, something that you know. When the world has given up on you there’s a place where you can go…” Kristi’s beautiful voice is powerful on this haunting poem.” J.W. McClure, Victory Review

They have recorded 10 CDs, and are well known in the UK where they have worked 9 tours in the UK playing UK festivals and folk clubs. They played Fylde Folk Festival twice, Baafest twice, the Moor and Coast Festival in Whitby, Captain Cook Festival in Middlesborough and more. They also work local Washington state music festivals, for instance they have played Applesqueeze Festival in Steilacoom for 5 years now. They sometimes work with a third musician as the Americana trio, Cosmo’s Dream with which they have toured to the midwest, and in the UK. They currently reside in Tacoma, WA.

“there's something in each of you that has the ability to connect beyond the words and music. You are a gift...that I am so grateful to receive.” -- Linda Frank